Life and death at the sheep corral

What a morning this has been.
A morning filled with stress, blood, death, shock, surprise and of course sympathy
As you all know by now, we are Predator Friendly, that  means we do not employ any lethal means to "get rid" of  predators.

One of the methods we use to prevent predation are guardian dogs.
These dogs are large powerful dogs that are bonded to the sheep. They have a nurturing and protective nature towards the stock. But,  when the stock is threatened these dogs have a whole repertoire of behaviour and actions to discourage the predators from entering the area of the stock.
Most times they bark, posture, mark their territory, chase
and if the threat continues they will interact and fight.

We like to keep our dogs safe and value what they do.
We never "encourage" them to chase or hunt.
Instead we just let them do what they feel they need to do to keep the sheep safe.
We have heard them rumbling in the bush
Our Fena got beaten up pretty badly by a pack of coyotes a few years back

We have seen the dogs at work,
however not like we did today.

We have been locking the guardian dogs on the outside of the fence believing that this would provide the sheep with the most protection, as the dogs could patrol a larger area.
We never thought that a coyote would be that bold as to go into the night corral with the sheep.

The coyotes have been very active and coming in pretty close recently.
Just yesterday I decided to add Vuk to help the females out a little and moved Lucy to the lambs.
With the added pressure,
we like to switch the dogs around to ensure the safety of the stock.

Anyway,
inside the fence was one big, mad coyote.
On the outside of the electric fence were Vuk and Fena.
This coyote was snarling, hissing and growling at our guardian dogs

Within a instant things changed
and there was nothing more we could do to give the coyote a chance of escaping.

When Vuk realised that the electric fence was off
he jumped over the fence to the coyote.
The coyote decided to jump out,
Fena grabbed it in mid air and swung is around.
Vuk jumped back over, and grabbed the coyote by the throat.
Fena had the coyote by the stomach and within a minute the coyote was dead.

Now, I know this is why we have guardian dogs,
they did their job,
what they did probably has saved quite a few sheep's lives.
However, I cannot help but feel some sympathy towards the coyote.

She made a wrong decision and died because of that.

What I can say is that it was quick.
The dogs did not badger the coyote at all,
they did not just nip at it,
nor did they unduly rip it apart,
their was no malice in what they did.
They dispatched it and then went about their business.

Us, being predator friendly has to do with our attitude and approach.
We will not shoot, trap, snare or kill any predators.
Our dogs do, what they need to do.
Of course, I would have preferred that the coyote did not chose to jump into the night corral  with the ewes.
Sure, I hoped it would respect the space of the guardian dogs and move on,
however it did not.

The coyote overstepped the boundaries and died because of this. 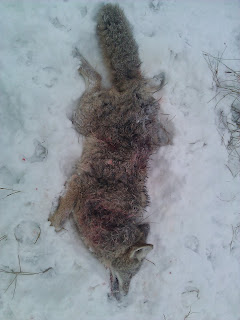 I think part of the shock is that you never expect this kind of interaction to play out
right in front of your eyes.
We know that these interactions can occur,
and this is why we use the guardian dogs,
to keep the sheep safe and to encourage the predators to go elsewhere

I feel double about this incident as
I feel sorry for the coyote,
however, I am also proud of how our dogs reacted.
They did what they were bred to do,
and the sheep are safe in their care.