Some reasons for Roaming

Some reasons for Roaming
Louise Liebenberg (2018) for The Shepherds Magazine

Roaming and livestock guardian dogs seem to go hand in hand, it is a regular topic of discussion on many forums. It is a big frustration and liability for many owners, and very often the start to neighbor problems.  Roaming LGDs, results in livestock being left alone and vulnerable to predation, it is stressful and time consuming to deal with.  This article will take a closer look at some of the factors that influence roaming.

Is roaming simply a matter of poor fencing, or do other factors play a role in why LGD roam?  It is important to make a slight differentiation here, some dogs roam, and others temporarily leave their flock.  Roaming is a problem while temporarily leaving the flock to patrol or push predators back, is part of their work. Although the “symptom” is the same, the reasons behind them leaving can be very different. One thing is clear, roaming is a complex issue, with multiple “motivators” for dogs to leave, including; poor genetics, lack of bonding, type of livestock, predator pressure, loneliness, sexual wonder-lust, fun elsewhere, getting lost or even pack (own LGD) pressure. Sometimes, roaming is simply because the dog has no affinity with the livestock, does not care for them and has no desire to be with them. Not every LGD is “cut out” for the job, in fact, a study in Europe suggests that about 14% of all livestock guardian dogs simply are not suitable for this work. 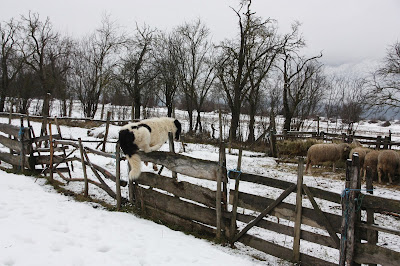 Roaming has often, (in my opinion incorrectly) been associated with the Great Pyrenees (GP) breed.  Many fail to remember is that there are more Great Pyrenees and crosses with GP dogs, in the USA and Canada than any other LGD breed. Statistically, that does means one will see more of them displaying unwanted behaviour, such as roaming, than less well-known breeds. Unfortunately, LGD are being crossbred with so many other non-LGD breeds, that this could certainly play a role in why a lot of GP are perceived to roam more. In some cases, people almost expect GP to roam, accepting that this is par for the course when working with Great Pyrenees dogs.
Certain breeders select for “close bonding” type dogs, looking to select for a genetic trait that the LGDs will stay close and tight to the flock.


Traditionally, LGD would accompany the shepherds into the grazing areas, these areas are often large unfenced mountains or plains, where various flocks graze these public lands. The sheep are often corralled or come home to the village at night and leave again the next day to graze. The dogs travel with the sheep and the shepherd into the grazing areas. They will often forge ahead of the flock “clearing” the area where the flock is moving to, they will patrol the area, scent mark, and generally find a place to watch over the flock. It is rarely a requirement that the dog must stay right in with the sheep continuously.  Patrolling is a normal LGD activity, they check out predator trails, scent mark and push predators further away from the flock. In a pack of LGD working together, the roles are divided, it is not always the same dogs going patrolling or the same staying with the flock, it varies daily. On the big range operations where fencing does not contain the dogs, it is the flock and the shepherd that “binds” the dog to that area.  When the dogs range further away on large operations, it is not problematic, unless the dogs do not return to the livestock. In fact, this type of working behaviour on large outfits is highly beneficial, as the unpredictability of where the dogs are, will certainly keep predators on their toes.
Some dogs may have more desire to go and patrol while others are more homebodies. Some people tend to frown upon LGD that like to patrol, believing that if the dog is patrolling it is not working, however this patrolling (provided it is not a few counties over) is all part of the way LGD work.


Roaming becomes problematic when your dogs are a hinderance to other people, property, or animals.  The liability issues one faces are immense if your dog causes a motor vehicle accident or attacks a person/animal. As most livestock keepers are smaller, pasture-based operations, it is safe to say, that roaming LGDs are simply unacceptable. This is where fencing and containment become important. There are few fences that can keep predators out, therefore fencing is to contain the livestock and the guardian dogs.

Every time the dog disappears, the livestock are left vulnerable to predators. A side effect to this roaming is that once it becomes an established behaviour pattern, any future pups will often be “lead astray” by the dog who roams. There are several factors that need to be considered when dealing with a roaming dog, understanding why the dog wants to leave will often clarify the steps needed to stop this behaviour.

Sexual wonder-lust is a common reason for dogs to leave the flock. Procreating is a very strong drive in all species and looking for a willing breeding partner is often a reason LGD leave their flock. Many people believe it is only the males who will go in search of bitches, but this is not true, females have the same strong drive, and when in standing heat, pretty much any male dog is an acceptable partner. De-sexing working dogs will often stop this reason for roaming, the dogs will remain more focussed on their job at hand and will be less distracted by hormones. Not only is that a big advantage but they will also not be encouraging other dogs to come looking for a breeding partner in your flock. De-sexing should occur before roaming becomes an established behaviour pattern.


Boredom, I have issues with using this word as I do not really believe that boredom is a factor in working dogs. I do however, think that loneliness is a factor. Dogs are social animals and having another dog as a companion or partner is important. Many single LGD will seek out this companionship with either the house pets or herding dogs and this is another common reason LGD leave their flock. The young LGD learns to breach the fencing to seek canine companionship. Having another working LGD provides the dos with social interaction and it adds extra security to the flock.

A single LGD can be overwhelmed with work and predator pressure. Dogs who are over-worked in high predator areas will sometimes simply stop working and leave. They know if they are outnumbered. A young, tired, and stressed dog will sometimes leave the livestock, and quite frankly, I do not really blame him.  One LGD in a high predator area is predator bait, at the bare minimum two dogs are needed to provide some much needed back up and protection to the other dog. It is not fair to expect dogs to work alone under these conditions.

Fun and games elsewhere is very attractive to the young LGD. Fun is a self rewarding behaviour. If the young dog can get played with, petted, and loved on away from the livestock, then it will often seek out this activity. It will find ways to escape the sheep pasture to have this fun. If the pup gets to play with the neighbor kids, it will seek out this activity. If it is fed and rewarded for being away from the livestock, then that is what it will do. There is no harm done to a young LGD that is petted and played with, provided it always takes place in the sheep pasture. Being strict on these parameters will help the young dog understand the boundaries.

Another factor that plays a role in roaming is own pack pressure. In wild canid packs, certain members are ultimately forced out of the pack to disperse to new areas. On larger operations, this can be a reason some LGD roam, having been forced away from the main pack. These dogs will often head home and hang out with other livestock or join a neighbouring band. If they cannot find another “pack” or livestock, they do roam further and further. Pressure from mature females can force other females away, males will often leave due to in-pack fighting. This is normal canine behaviour. In smaller acreages, too many dogs can result in several unwanted issues.

The final point regarding roaming in this article is that poor fences are probably the main reason LGD start to roam. These dogs do not respect a barrier, they have opportunity and are often rewarded (attention, fun, breeding, excitement, adventure etc.) for escaping. Some dogs become experts at finding weaknesses in the fences and become fanatical at escaping. Teaching young dogs to respect boundaries and ensuring they have no opportunity to escape, requires good fences and an alert owner.  Unless you run a large range operation, then fencing is the number one tool to prevent roaming. Young dogs who are taught to respect fences, will often not challenge fences when older. 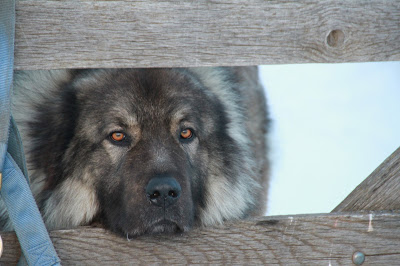