Written for The Shepherds Magazine

We are slowly coming out of a very long and brutal two-month winter period and that is a big relief. We have had temperatures for weeks between minus 22 and minus 40 Fahrenheit, with just the odd day of reprieve here and there.  Were we live (in the sub-arctic zone), we are used to severe cold, but normally it only lasts a week or so and then it warms up a bit, this last winter was a long haul!  The extreme cold certainly took a toll on all the animals. We have used much more feed (hay and grain) than originally anticipated to both the cattle and sheep, to help them through this cold. The “outside” ewes who are only due to lamb in spring, seemed to have maintained their condition well with their winter woollies. The ewes that lambed in December are in the barn, we can see that the cold was a little harder on the lamb with their growth rate a little behind than other years.  The livestock guardian dogs (LGDs) certainly spend more time hunkered down between the sheep or snuggled in a straw bale. They rarely use the dog houses, preferring the warmth and companionship of the sheep and cattle.  One of our seven-month-old pups really learnt to bed down with the replacement heifers. Cold weather certainly does help with the whole bonding process.


With very cold weather, I like to feed the LGDs twice a day, to ensure they have enough energy to keep warm and maintain condition. I will go from once-a-day feeding, to twice a day, morning and evening. I notice a dramatic increase in the amount of food the dogs will consume when it is so frigid. The amount I feed will almost double.  While chatting to a friend and sheep rancher colleague, she mentioned that in this cold she decided to feed her dogs some “YAL” as she liked the dogs to have a nice “warm belly full of mush”. I am not really a dog food “foodie”, and when folks start talking about dog foods as though they are talking abut human health products, things like this usually tend to go in one ear and out the other. The word “YAL” got my attention, I knew what it was but was not something I had considered feeding our dogs but right now, this sounded like the perfect solution to help keep the dogs warm and increase their food intake. It is a challenge to get enough liquid into the dogs, as any liquid freezes instantly. By feeding a stew, rather than frozen meat or kibble, I would be able to increase the liquid intake for the dogs.  I decided to give YAL a try.

I rummaged around in my pantry and found a bag of quick oats, boiled it up, added some bacon grease and a pinch of salt. I made a big pot and fed this to the dogs along with their regular food of kibble and meat. The dogs wolfed it down. In a relatively easy manner, the dogs got a nice big bowl of warm food and plenty of liquid, and surprisingly, they seemed to really like it. I was concerned they would turn their noses up and not eat it, which self respecting dog would eat oat porridge?

This got me thinking more about traditional food for LGD. I remember seeing the dogs in Macedonia eating at a trough that had a bread and whey mix in it.  After doing a little more research and extra reading, it appears that most shepherding cultures across Europe, do feed a grain-based diet to the LGDs, supplemented with milk, whey, meat scraps and anything else that was left over. The dogs would get the afterbirths, dead lambs and other table scraps that were available. In some places, the dogs are fed a porridge type food, and in others a “bread” was made for the dogs. 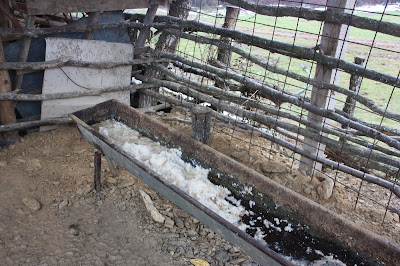 The communal feeding trough for the livestock guardian dogs. In the trough is bread that is usually mixed with water, milk or whey. This forms the basic diet for the LGD.
Güvener Işik writes extensively in his book “The Dogs on Anatolia” about the traditional food the dogs are fed in Turkey. “Yal” is a porridge of broken or flaked grain (mostly barley, oats, wheat, corn or in some cases bran). If only the flour version of those grains is available, then that is what is used. It is boiled with a pinch of salt and this forms the basis.  Added to this mix is often the left-over whey from the cheese making process, milk, yogurt and leftover table scraps such as vegetables and oil.  In North America we tend to forget those most of the shepherding cultures primarily utilize sheep for milk and cheese making. Every shepherding family makes a sheep cheese and the whey left from this process is added to the dog food. Whey fortifies the grain-based diet of the dogs, and due to its protein structure, a great addition to the Yal. Whey is an interesting protein source as it is neither meat based not plant based but comes from dairy. Protein, simply explained, is made up of various essential and non-essential amino acids.  Essential amino acids are those that dogs cannot self produce and needs to be consumed from an external source. Whey has one of the highest ratings for protein, when comparing common protein sources (chicken, beef, soy etc.) according to their quality, this includes how “bio-available” it is to the dog and how many of the essential amino acids are in the protein source.  (William Misner, n.d.)  It is clear to see why a basic diet of boiled grains, and whey formed a traditional dog food where both grains, and whey are readily available.

In some areas a bread is baked as dog food.  In Spain the dogs are fed a rye bread called “perruna”. The rye bread is hard, black and weighs about 750 grams, it is easy to transport into the mountains and taken while grazing. Milk is added to the bread and this formed the basic diet.  Dating back to the 18th Century, the shepherds and their dogs ate the same portion of food as the “La Mesta” rules determined. La Mesta was a powerful association of sheep ranchers who determined that the mastines were protected by law. These wolf fighting dogs were highly revered. The LA Mesta decided that the dogs should eat the same portion and bread as the shepherds themselves, for the brave work they do.

In Romania, the traditional food is very similar to the Yal the Turks feed. It is a mixture of “Zer” (whey) and a corn-based porridge called “Mamaliga”. Depending on what is available, the dogs would get mamaliga or bread, and zer. In a large pot the zer, mamaliga, some veggies and meat scraps are boiled into a soup/stew for the dogs.  Butcher scraps like the head of the animal and large bones were given to the dogs to eat as extra.

In Macedonia, we saw first hand how important cheese making is, every family makes its own cheese (a type of feta). The dogs are fed a mixture of bread and whey, along with dead lambs, afterbirths anything else the shepherds could spare, and even small game the dogs could hunt. I know, our dogs happily hunt mice to add to their diet! 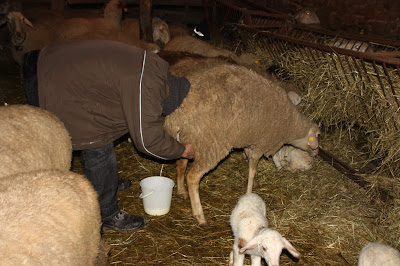 Milking sheep to make cheese is a primary use for sheep in most shepherding cultures in Europe. The milk is used to make a feta type of cheese and the dogs get any left-over milk, whey, yogurt added to their basic diet. This Macedonian shepherd quickly milks an ewe during evening chores.

According to Güvener Işik, feeding a grain-based porridge or bread will result in pups growing slower and therefore will have a stronger skeletal system.  He mentions that Anatolians were selected for and evolved to being able to thrive on low calorie and low protein diets. As he states; “Overfeeding an Anatolian is abusing what the Anatolian inherited from its ancestors.”. He makes an interesting statement regarding feed and energy levels in dogs, stating that low energy food helps to scale the dogs’ energy level down to that of the sheep. We know with horses, one can feed them “hot” resulting in a high energy horse, so perhaps this is true for dogs as well?  It would be interesting to see if some high energy/naughty dogs would calm down if fed a lower energy and lower protein diet.

One thing I can conclude, that in the brutal cold we had, our dogs really seemed to appreciate having a warm, belly full of porridge. 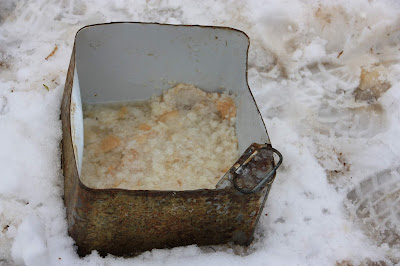 The staple food for LGDs, bread or porridge and scraps. In these areas the shepherds cannot access nor afford expensive industrially made kibble. The dogs eat what the people have on hand.