The dilemma of “hands on or hands off” raising. 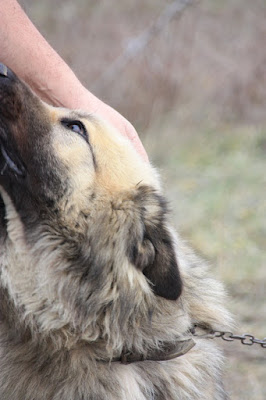 This article was published by the Shepherds Magazine
Copyright: Louise Liebenberg 2016

As a child we played a game at school, were the kids formed a long line and the teacher whispered a sentence into the ear of the first child. That child would then turn and whisper it into the ear of the second child, and so it went all the way down the line. The last child had the task of saying out allowed what the original message was. It was always very funny as the message became distorted and often ended up not being anything like the original message.

It would seem that somewhere along the line, the message about how to raise LGD got a bit lost and distorted from the original introductions of LGD into North America. When LGD were introduced in the 1970’s to sheep keepers in the USA, a large scale study was undertaken by the Hampshire College under the guidance of Ray and Lorna Coppinger. Their job was to import LGD from Europe, distribute these dogs to sheep keepers and monitor these dogs over an extend time. This is too date, the largest and had the longest running time, study conducted on LGD. It spanned 10 years and well over 1000 dogs were monitored and "scored". Almost every, more recent study, always references the studies conducted by the Coppingers.

Coppinger has always been blamed for promoting the “hands off” rearing practice. Reading through many older publications, I did not find anywhere in that original study that it advocated that the pup should be reared with no human contact at all. Somehow, somewhere the message become distorted to the point that no handling became the norm. This idea is still perpetuated three decades later, and the ramifications of this distorted message are felt within the livestock guardian dog world.

What was written by the Coppinger was that “minimal human contact” was recommended in order to allow the pup to form the sheep-dog bond. Nowhere in the old 1990’s USDA publication does it say that LGD should not be handled at all.
(https://pubs.nal.usda.gov/sites/pubs.nal.usda.gov/files/LivestockGuardingDogs.pdf).

Coppinger did state that some dog/human interaction was required and that some petting was appropriate. (http://ir.library.oregonstate.edu/xmlui/bitstream/handle/1957/18914/ec1238.pdf).

In more recent publications they still advocate “minimal human contact” is the best way to raise them.  (http://ir.library.oregonstate.edu/xmlui/bitstream/handle/1957/18914/ec1238.pdf).

Somewhere the “minimal contact”, evolved, the message went from little contact to no contact, hands off rearing.
Hands off rearing become very much the norm under the sheep keepers, resulting often in semi feral dogs, distrustful of people, difficult to catch and impossible to handle.

The idea that a LGD is raised in a vacuum without any human interaction is perhaps one of the biggest misconceptions with these dogs. Wherever you look in Europe, (where these LGD breeds originate), no where do you see a pup raised in isolation with the stock. The kids will play with pups, the dogs are often tethered in the villages during the winter months and in some cultures the dogs are even honored and celebrated for the work they do in keeping the livestock safe.

In the Balkans, the sarplaninac dog who killed a wolf, would be paraded through town with flowers around its neck. The Turkish celebrate their dogs in big festivals with the dogs wearing ornately decorated collars, and in Italy the sheepdog of Abruzzo is not only the guardian of sheep but also “custodians of the ancient traditions”. (http://greenholidayitaly.com/2014/01/08/abruzzo-sheepdog-the-custodian-of-ancient-traditions/). 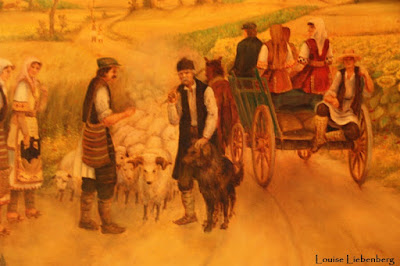 Photo of a painting from a restaurant in Macedonia.

These dogs live a hard life, as do the shepherds, and to outsiders, it may seem a harsh existence, but the shepherds value and revere these dogs. While visiting Macedonia last year, I saw the gentle scratches behind an old dog’s ear, the shepherd’s pride in their dogs and the kids playing with a pup. These dogs were never raised hands off,
but they also did not get to sleep on the couch! 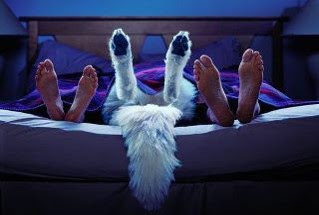 In the late 1970s, the larger US sheep operations were the ones mostly utilizing these LGD breeds, grazing large tracts of land with thousands of sheep. Since then, there has been a shift, with more hobby farms and homesteaders keeping small livestock.

According to the 2004 article “Trends in the U.S. Sheep Industry by Keithly G. Jones;
“the proportion of small farmers with sheep operations is on the rise”  (http://usda.mannlib.cornell.edu/usda/ers/sheeptrends/aib787.pdf)

With this shift in the sheep industry, also comes a shift in the use and utilization of LGD. With the homesteaders and hobby farms there is often no history or experience of working with livestock or even with the guardian dogs. For many “newbies” it is tough to figure out how to go about raising their dog to be a successful LGD, where on the one hand some people are advocating for hands off rearing, publications say “minimal handling” and those, (like me) who advocate for a well socialized/handled working dog.
Conflicting information, for the newbie, often results in insecurity on how to move forward with a young pup. Perhaps a good starting point would be for the livestock owner to define exactly what role he/she expects the dogs to play on the farm. 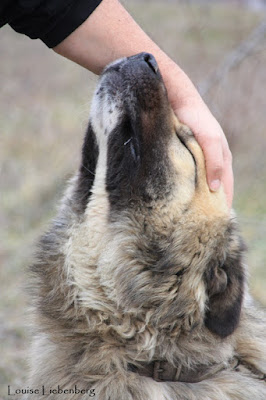 Some people do not necessarily even understand exactly what job a LGD actually does, and will often confuse the roles of a general farm dog, with that of a herding dog and that of a livestock guardian dog. Understanding these differences is crucial to knowing what dog is required on the small farm. A new book by Janet Vorwald Dohner called “Farm Dogs: A Comprehensive Breed Guide to 93 Guardians, Herders, Terriers, and Other Canine Working Partners” might be a good place to start. ( Available on Amazon) 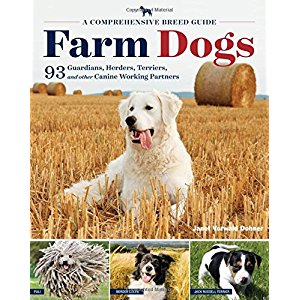 The first place to start with a young LGD is understanding the importance of allowing the young pup to form a sheep/dog bond. This is really critical, as it forms the basis from which the dog will grow up and understand its role as protector of the stock. 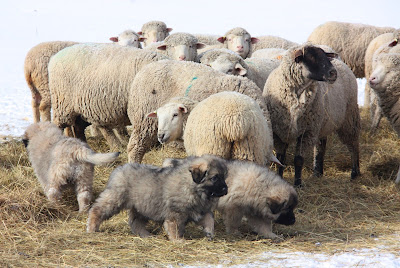 For many, the idea prevails that they need to “train” their LGD pup to do the job it was bred for. Working with LGD is not so much a “training”, instead, it can be seen as a process. A process where the instinct of the pup is allowed to develop, is cultured and molded. You do not “train” a LGD to go out and bark at coyotes, you do not tell it what it needs to bark at, nor train it to go out and attack an approaching predator.
The guardian dog is one of the few breeds that must be trusted to make certain judgement calls, the dogs needs to have the freedom to make these decisions on their own. Unlike a police dog, that is taught to bite and attack on command, a guardian dog needs to make the “call” whether to simply bark and posture, or if it needs to engage the predator. The LGD is ineffective if it needs to wait on a signal or command from the owner to go out and protect the stock.

For the dog to accomplish this, he needs to rely on his instincts, the bond he has with the stock and his understanding of the livestock’s behavior.

This process of learning, involves allowing the pup to develop a bond with the livestock it will be protecting when it is older. The pup needs to spend the most part (preferably 24/7) of its day in with the stock so that it can learn everything about the livestock. The pup needs to learn when a sheep stomps it foot, the pup needs to back off, when the sheep gather together something might have startled them, the pup needs the time to “learn” all about sheep behavior. It is this time where it will learn that sheep are an integral part of his life.

It is imperative for a young LGD to build the sheep/dog bond so that it is happy and content to live with the stock.

Having said this, it sounds pretty much like I am advocating for “hands off rearing”, but no, I believe that human interaction with the guardian dogs is vitally important for the well being of the dog and for the family who live and work on the farm. There is no danger of ruining the young LGD by petting, loving or playing with it, but there must be some boundaries to this; in order to get the perfect mix of a well socialized dog who is respectful and friendly to the family,
and one who is bonded to the livestock. 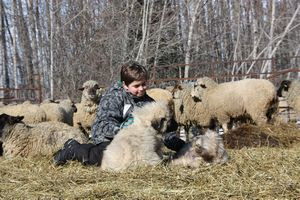 Too achieve this, all interaction needs to be at the stock, if the pup is allowed to come up to the house for treats and petting, it will ditch the sheep and take up residence at the house. The pup needs to understand that all good things happens at the livestock. I always teach my young dogs some basic manners. This is the training part, and these lessons takes place AT the livestock and IN the pasture the livestock are in. 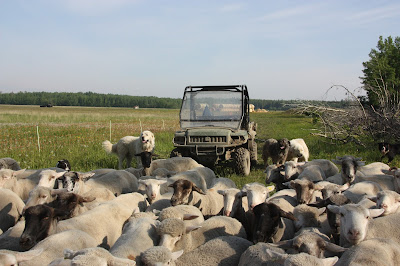 I teach them to walk nicely on a lead, not jump up, to sit, not to barge through open gates, be tied, hop in and out a stock trailer, to be groomed and nails trimmed etc. This all happens out in the field with the stock. The kids can go to the pups and pet them AT THE STOCK. I will work with the young dog for 10 minutes at a time, a few times a day. I always spend some time petting and visiting with the pup when I am doing chores or checking the livestock. My dogs are super sociable to me and our family, accepting of people who are with us and yet they know their job is to stay with a guard the stock, and will warn strangers to stay away. 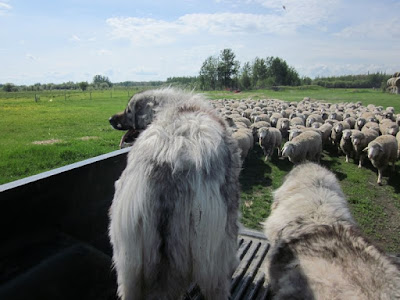 During this process, your main job is to supervise. Intervening with a well timed correction for unwanted behavior, a reprimand and some guidance goes a long way in ensuring the LGD pup grows up to be a calm, respectful hardworking guardian dog.

The young guardian dog needs time to form a bond with the livestock, he needs to spend the most part of the day with the livestock he is supposed to be guarding. The goal is not to micromanage every move he makes; he needs to spend a large portion of the day in with the stock. It is imperative to also build the human/ dog bond but, within certain parameters. Dogs can certainly form bonds with both the livestock and humans, however initially the dog needs to understand that the stock should be his main priority. Allowing this bond to form, does not mean you cannot supervise or correct unwanted behavior. The supervision and guidance, is what molds his behavior to ensure the young dog becomes a successful LGD. 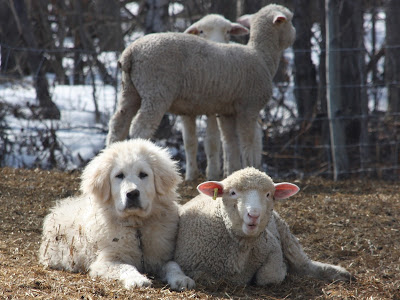