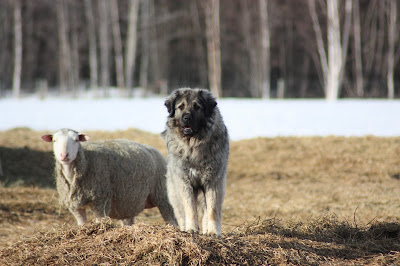 Today we said farewell to a great dog.The sadness we feel is not in her passing, but the realization that she has left us too soon.

At the end of the summer we noticed that she had a tumor, and that this tumor was rapidly growing, the prognosis was poor. We decided to let have have an early retirement and enjoy the beautiful Alberta fall weather. She wanted nothing of retirement and would head back to her sheep daily, often curled up close to the fence of the pasture wanting to to be let back in.We were doing her no favors by removing her from the dogs and sheep she loved.We relented, and she returned back to her job as matriarch of the pack and protector of the sheep.

We allowed her to carry on doing what she had always done and she was happiest curled up on a hay bale watching over everything.
The tumors expanded and spread across her body and we noticed a slowing down of her body but not of her mind. She still hazed a coyote a month ago and had a fence discussion with another, a few weeks back.When the weather turned colder we brought her into the warm shop at night and every morning she would trot back out to the pasture.About 10 days ago we realized that her body had started the shutting down process, she was full of tumors, she stopped eating, her energy was low, she did not venture back out to the sheep but hung around the barn.It was then that the sadness was the greatest, as we knew that everyday could be her last.

The appointment was made for the vet to come and euthanize her at home today.We were thankful that we could give her a quiet and easy death. Her passing was not sad, as we knew that she did not need to suffer to the very end.

She was surrounded by the people she loved, in her place and even with her favorite cat rubbing himself against her

We do not want condolences or even sadness, as she lived a grand life.

She had her pack, she had family, she had us and, she had her sheep.
She patrolled the vast pastures, she protected the sheep, she was brave and confident, and she lived a very natural life. She had her mate in Vuk, her daughter and other members of the pack around her. She had the freedom to move around on hundreds of acres, hunt squirrels in the bush and did not have to be obedient to any commands.

She was not molly coddled, controlled by leads and dog parks, and she certainly was not a "fur baby".

She ran with the dogs, she swam in the creek, she slept under the starts, howled with the wolves, she rolled in the snow, she chased ravens, threatened coyotes, she played under the northern lights, and she protected her sheep.

She traveled across the world and into our hearts,
and, we are happy and thankful for having her, be a part of our lives.

Our memories will be of fondness,
and not filled with the sadness of her passing.
She was loved and respected.
We will miss her but are content that she had a great, dog worthy, life. 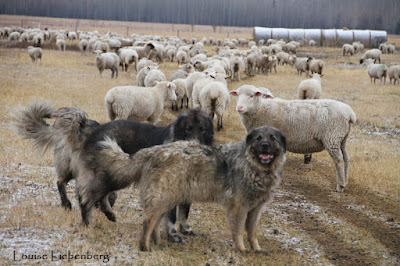 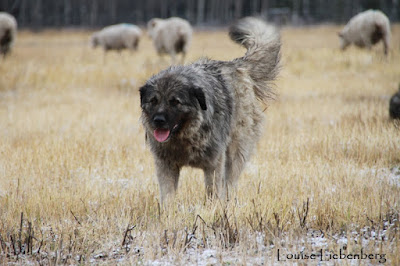 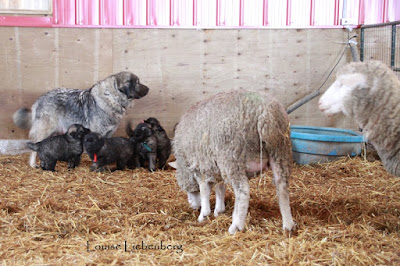 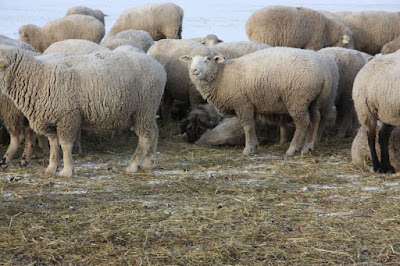 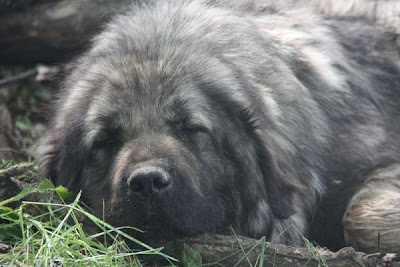 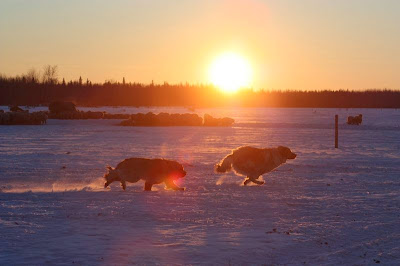 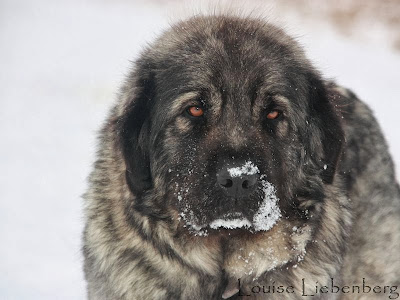 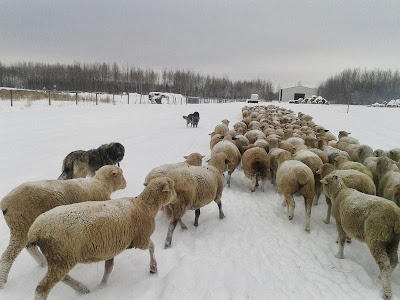 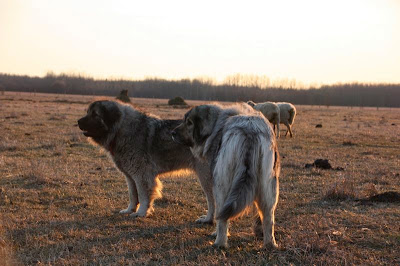 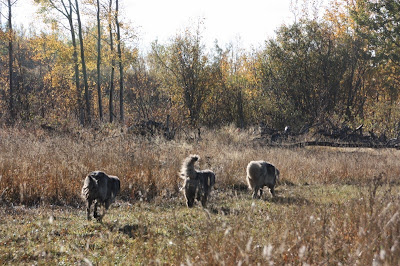 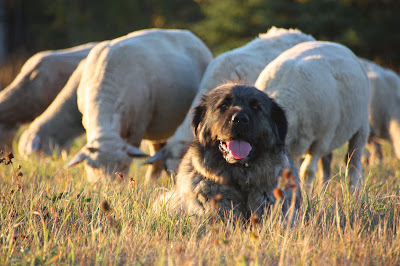 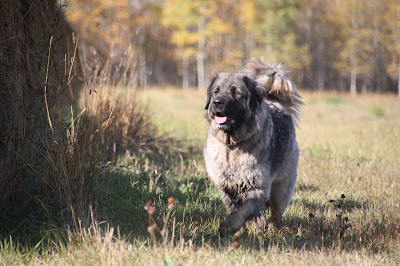 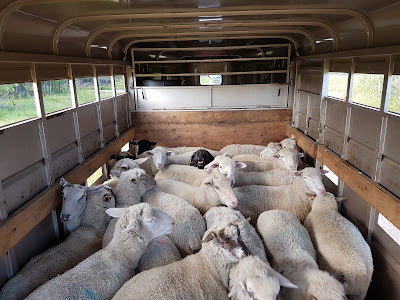 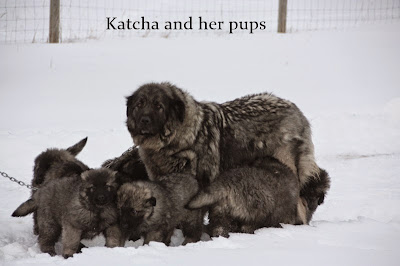 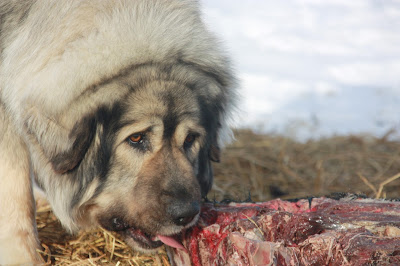 Feeding a pack of livestock guardian dogs can be expensive, however, there are several ways to help reduce the overall feeding costs. In this article, I will discuss some of the things we do to help maintain quality food to the dogs at a cost-effective rate. I understand that laws and situations are different, and this may not be a viable option for everyone.

Feeding dogs is always regarded as a “hot topic” among dog breeders and dog owners. Some swear by certain brands, others by raw feeding, yet others by “traditional” foods that dogs would eat in their land of origin. I have the simple belief to feed what we have, what is available, the best we can economically afford, and as naturally possible. Fads, great marketing, or clever packaging of big brand dog food does not influence me. In fact, I am averse to these gimmicks in the dog food industry. I like to keep it simple and affordable. 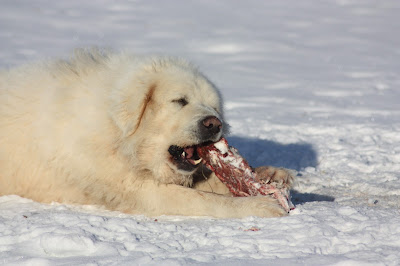 We are feeding 8 Sarplaninac LGDs and a few border collies at any one time, that is well over 1200 lbs of dog every day. Our dogs go through a 40-lb bag of dog food every couple of days. A reasonable quality dog kibble is quite expensive, and keeping the dogs well fed is quite a big cost.  Our dogs are fed primarily a raw diet including meat, bones, offal, and eggs, if raw is not available or inconvenient to feed, then the dogs get kibble. We are not “dog foodies”, our dogs eat what we have. We have never had any issues with the dogs switching between dog food brands, or between going from raw to kibble.

We have a few avenues for acquiring meat for the dogs, we have a good relationship with a local butcher who will provide us with meat scraps, bones, and other waste from butchering (things like liver, kidneys etc.). A lot of this waste is fat, which we either freeze and save for the colder winter months, or feed alongside some kibble. Excess fat, is disposed of through composting.

Our main source of meat for the dogs is through the feeding of cull animals from our own ranch.  We have made the business decision not to sell all our cull ewes and rams, instead we will process some of them ourselves into our own dog food. In this way, we can butcher a cull animal when we need it, and do not need to be concerned with storage or freezing.

We live about four hours away from the closest auction market, shipping cull ewes has been an expense to us due to the distance to our markets, time to drive them there, commission fees and the low value that these animals make on the market. It makes more sense to process them into our own dog food than ship them. Not only does it make economical sense for us to utilise these animals ourselves, it is also perhaps a better welfare decision for the culls, who do not have to endure long travel times and the stress of auction markets before butchering.
We will also process our own cull cows who cannot be shipped due to transportation and welfare reasons. We are often called by neighbouring cattle ranchers who have such a cow to come and process the animal., these cows are often given to us for free. A cow can feed a pack of LGD for quite some time.


We are lucky to live in an area (Northern Alberta, Canada) where we have very cold winters that last for 6-7 months of the year. This helps to ensures that all the meat we process, remains in a frozen state, allowing us to preserve it for the dogs without having to have a whole lot of freezers.
Our method for butchering is simple, after freezing the carcass, (this happens naturally outside in the winter), the entire animal is cut into large chucks, we do not skin or gut the animal, and simply make big chunks which we feed in frozen form to the dogs. 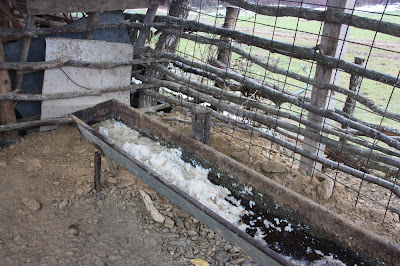 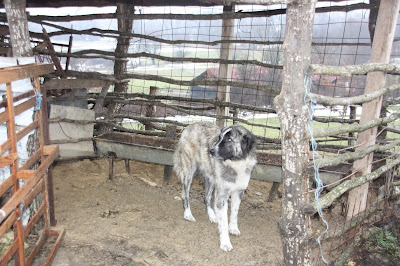 Some ranchers are concerned that once LGDs “taste blood” or eat the animals they are supposed to be protecting, they will go rogue and will not be reliable as LGDs any more.  We have never experienced this type of behaviour in any of our dogs. The dogs can clearly distinguish between the live animals they protect and chucks of frozen meat as food. In Macedonia, we saw shepherds feeding fresh dead lambs, cut into pieces to their dogs and none of these dogs attacked the sheep they were protecting. Many of the shepherd’s dogs lived on a basic diet of bread and water, sometimes supplemented with whey from cheesemaking or some milk. Any protein the dogs received was primarily from dead livestock or afterbirths. The dead stock was utilised to feed the dogs.

We do not allow our dogs to simply “help themselves” to any dead livestock, we do remove the carcasses and if the animal is freshly dead, we may process this meat too. We have found that our dogs will protect a dead sheep in the field from predators, ravens, and other scavengers, and then when cut up and offered as a meal a few weeks later, will willingly eat it then. There are a few things we do to ensure that a young dog understands the boundaries of what can be eaten and what not; we will not allow a young dog to eat still born lambs, we do remove deadstock as soon as we can, we reprimand a young dog if it starts to chew on a carcass in the field ( we like to investigate a carcass to understand what the animal died from), we like to portion and feed the animals frozen chunks rather than whole carcasses. 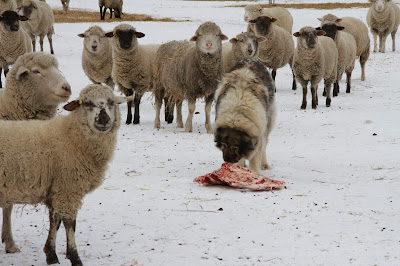 There are times when we do feed kibble, primarily in the summer when it is difficult to preserve the meat.  Our dogs are flexible, and they eat what they are offered, and they do not experience any stomach upsets going from kibble to raw meat. Feeding kibble to the dogs in among hundreds of sheep can be challenging, simply because some of the ewes really seem to like dog food. Feeding kibble often requires us to feed the dogs separately to avoid the sheep trying to bully the dogs for the kibble, we do not have this issue when feeding raw.
We raise laying hens and will also supplement the kibble with an egg or two.
Our dogs are healthy, fit, and energetic, have no allergies, have great coats and strong clean teeth, and are never ill.  I feed to need. If the dogs are working hard, or the weather is wicked, then the dogs get more. I like to keep the dogs well fed, and in good working condition.
Seeing the dogs enjoying a healthy meal of mutton or beef, knowing we have made the best economic decision for feeding our dogs, made a humane choice for the cull animal, and are feeding a high quality meal to the dogs, makes feeding this way a good choice for our ranch.