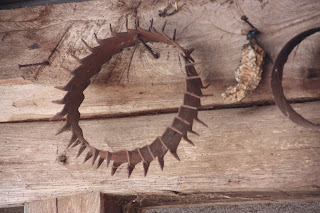 When surfing the internet about livestock guardian dogs, one can often see images of dogs wearing certain objects around their necks. In this article, I will explain some of these contraptions, how they work and the function they have.  This article will cover wolf collars, dangle stick, yokes and drags. All tools that shepherds have used for their guardian dogs to either keep them safe, stop some problem behaviour primarily during adolescence or are required to wear these objects by law.

The spiked collar or also sometimes known as the wolf collar, is usually a 2-inch-thick leather or metal collar with spikes protruding outwards. The primary reason some livestock guardian dogs have these spiked collars is to protect the dog’s throat in a physical altercation with predators.  The spikes will give the dog an advantage in a fight, helping to protect the neck region from being bitten and shaken.   In some countries the spiked collars are highly decorative and are also often on display during shepherding festivals and parades. In Macedonia, I saw some dogs wearing a simple hand made spiked collar. This was to protect the old dog from fights with other local dogs or when a new dog was added to the pack. The spiked collar provided some protection to these dogs and helps to keep in-pack fighting down.  The dogs learn quickly that the spiked collar can also be used as a weapon.

Not every European country has a culture of LGD wearing spiked collars, it is more common in some countries, than others. In Spain and Turkey, it is quite common, whereas in countries such as Portugal, Romania, and Poland it is less common.  Liezl and Cody Lockheart run a 3000-acre ranch in Saskatchewan, Canada. They custom graze and calve, about 2000 cows in several different calving/wintering groups and run 450 ewes.  Their LGD's tend to travel in patrols of 2 or 3 to the various cattle pastures several miles apart. Predators include coyotes, wolves, bears, cougars, and ravens. They use Turkish Kangal, Anatolian Shepherd, Pyrenean Mastiff, Great Pyrenees, and some crosses of these breeds. They have found using wolf collars to be a life saver in their situation. Lockheart states; “All our dog’s wear spike collars. Collars provide protection in predator conflicts and keep intra-pack disputes from escalating. Prior to wearing spike collars, we lost several mature dogs to packs of coyotes. Spike collars protect the dogs from potentially lethal neck injuries, saves on veterinary costs and keep our dogs healthy and working. They are an integral and essential tool for the success of our pack.”


The dangle stick; the dangle is essentially a short chain attached to a metal, plastic or a wooden bar hanging down from the collar in front of the dog’s chest or front legs.  There are two reasons why a dog will have a dangle; in some countries (like Romania and Bulgaria) it is law that all shepherd’s dogs MUST wear a dangle stick, the dangle is used to identify that these dogs belong to a shepherd and are not free ranging strays. This dangle is intended to prohibit the LGD from chasing game animals. Sider Sedefchev explains; “There is an absurd law, according to which shepherds are obliged to put a 30 cm long stick on the collar of their dogs, which hangs to the elbow joint. This stick is supposed to acts a hindrance to prevent the dog from running, and dog without one can legally be shot by any hunter. In Bulgaria the hunters are a powerful lobby, which is the main reason for this law. Shepherds do not agree with the use of these sticks because they are an obstacle to the dog’s work and view it as being too humiliating for the dog”


The second reason some owners place a dangle on their young LGD is to slow down or hinder the young dog from chasing livestock. The stick interferes with the movement of the dog and this slows the dog down. It is more often used in adolescent dogs who are at times, a little boisterous around the livestock.   This dangle stick slows the dog down and in doing so, removes some of the stimulation the dog feels when chasing the livestock. It discourages adolescent play/chase behaviour but will not stop a dog that is super focussed on chasing and harming livestock. A correctly placed (and, made) dangle should not harm or cause injury to the dog, and supervision of the dog is important.  The shepherds in Romania and Bulgaria will often make the dangle very light-weight and hang it higher so that it will not disrupt the dog’s ability to work. Most dogs learn rapidly how to move around with a dangle and it does not harm the dog in any way.

The yoke is a simple, light weight triangular collar attached to the normal collar of the dog. The function of a yoke is to make the neck region of the dog bigger than the head and in this way, prevent a dog from digging under fences or crawling through fences. The yoke is often made of pvc piping, bolted together, and attached with zip ties to the collar. It should be able to rotate so that the dog can sleep and lay down in a natural way. The yoke should not be overly large, heavy or hinder the movement of the dog. The yoke will restrict dogs who like to escape from fences by digging under the fence or going through the wire squares of field fence. A yoke is a temporary measure to help convince the dog he is too big to fit under the fence. A yoke does not replace a good fence and will also not prevent a dog from jumping a fence. It is however, very effective for those dogs who can shape shift through small holes. It is very similar to a goat having a wooden bar duck-taped across the horns to prevent the goat sticking its head through the fence and getting caught in the wire. LGDs that roam, are a liability to their owners, are not doing their job and can be shot or killed when gallivanting across the county. A yoke can be a good short-term aid until a fence can be repaired or to help teach the young dog that fences need to be respected.  A yoke looks unwieldy, but if constructed correctly, the dog can run, move, play, sleep and  eat  normally. It will only restrict the dog when it tries to slip through an opening in the fence or under a gate. As with the dangle stick, the dog should be supervised while wearing a yoke.

A drag, some people like to slow a boisterous LGD down by placing the dog on a drag. Some people will utilize a drag chain, a log, or a tire. A drag will slow a dog down and this will also have a similar effect as the dangle. With a drag as opposed to a dangle, there is a higher chance that the dog will get tangled up around a tree or another object.  A drag should not be used for dogs who jump fences, as the risk is too high that the dog will jump over a fence and get hung up.

Many of these collars and dangles are part of the shepherding culture and are regarded as traditional tools for working with LGD. These can be seen in most cultures where shepherding  and LGD are a way of life. These maybe "humiliating" for the dog but they are certainly not cruel or harmful for the dog. In most cases these are are used to help keep the dog safe during a training phase.
Posted by Louise Liebenberg