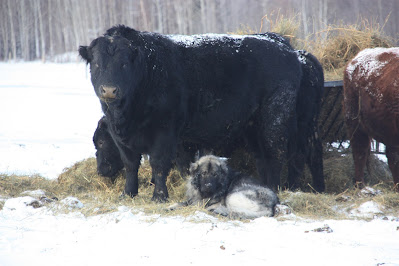 This past week all my social media feeds were about a young livestock guardian dog (LGD) that battled some coyotes to save his sheep. The story was shared far and wide and it made me realise that for many of us full time shepherds this is “normal” for our dogs, we keep these dogs with our flocks to do this exact job. Many of our dogs, although very much appreciated and loved, never will get the media attention that this dog did. We all have “unsung hero’s” in our back pastures, in this article I am going to share the story of one of mine.

I lost one of my most favorite livestock guardian dogs (LGD) last week to old age, normally I am not one to really express publicly, the sadness I feel when one of the team passes on. This time it is a little different and I would like to share some of the lessons I have learnt from this dog. His name was Vuk, which is the Serbian word for wolf. Vuk, has challenged many of my previously held ideas on what LGD should be and do. He forced me to reassess my thoughts on how LGD work, and to not limit their working ability because of how I expected them to be.
Vuk came to me as a 12-week-old puppy from his breeder in Pennsylvania. The first year with him was a struggle.  He was high energy and was rather difficult to form a relationship with as he was fiercely independent and although being friendly enough, simply had no time for anyone.  As a pup he was always on the go, I used to joke that he should have been a sled dog rather than an LGD. He could not relax and seemed “hyper” all the time. With the sheep, his energy and activity level was certainly not something the sheep were used to. The found him disruptive and I was irritated by him. I always felt the energy level of the LGD should match that of the sheep. I liked the slow and steady types. This young dog was so energetic, that I sincerely questioned if he would make the grade as an LGD.  Whenever he moved, the sheep became startled. When he was about a year old, I mentioned to his breeder, that I may consider rehoming him, he was just not "my kind" of dog.

He was everything I thought was wrong with a LGD, he was high energy and did not really want to be a “close” type of guardian dog. I questioned if he was bonded with the sheep as he never really “snuggled” with the sheep.  He was never far away, but never chose to be close to the sheep, or huddle up against the sheep during the frigid winters here in Canada. However, as he was never inappropriate toward the livestock, and he never set a foot wrong towards the sheep. He never showed any predatory behaviour towards them; never played with them, was not rough, he never pulled wool, nipped, or chased them, and it was this, that made me decide to keep working with him.   I learnt not to try and shape Vuk into being the dog I wanted, instead to learn to work with him and his unique character.

Once I had that mind shift, things changed. When he was old enough to go and work on the larger bush pastures where the predator pressure was high, he settled into his job. He would patrol hundreds of acres of bush and pasture, and his energy level became an asset. He was tireless in checking out regular predator trails and chasing off predators. He would come and check in with the sheep and be off actively patrolling again. By the time he was three years old he was had fully settled into his job, he was calm and controlled around the sheep as he had enough work to keep his mind and body busy. He was always checking in with the flock, laying in an area he could watch over them, and was highly protective of them. I have seen him battle coyotes, tree bears and be on the watch for cougars. I have even seen Vuk fearlessly chase away a large bison bull from our cows. Wolves are part of our environment, and I am sure his presence and determination helped keep wolves away from the livestock. We could see tracks in the snow where confrontations have taken place and we would find dead coyotes in the pastures, He was powerful, fast, and smart and never backed down from a confrontation.

Vuk understood his job and that was evident in all his interactions with the livestock. He was the guardian of the livestock and left the mothering of lambs to the ewes themselves. He was adamant about chasing ravens and eagles out of the pastures and would guard a dead sheep’s body from scavengers until I removed it.  He was more a warrior than the nursemaid type.  Although he was never the type of dog that would allow lambs to jump up on him, or lay down close to him, he was super reliable with lambs.  He valued his personal space and when a lamb or calf would come and lay near him, he would get up and move to another spot. In many ways he was like this with us too. He would come for some petting but would after a few minutes, trot off back to the livestock. He would watch over lambs and calves with vigilance and dedication. 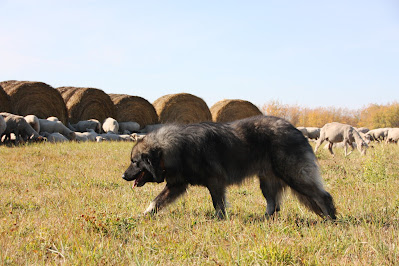 He could often be found watching over a bunch of calves, while the cows went to eat or drink. He read the body language of any animal perfectly. If he got to close to a cow with a newborn calf and she gave him “the look”, he would quietly move further away and gave her space, enough so, that the cow did not feel the need to run him off. He was very in tune with the reactions of the livestock, he would back away from an ewe that might feel nervous around him yet would stand his ground around the big bulls.  He was probably the dog with the best ability to “read” the livestock I have ever worked with. The sheep and cows soon grew a bond with this dog and trusted him.

He was a true leader when it came to the other dogs, he was respectful of the older females and would work well within the team. Most of the other dogs really liked to work with him. He was an excellent mentor to other young dogs. He was fair when it came to young males, he did not go looking for a fight, but if the fight came to him, he would deal with it. He was adaptable and could be moved around with other dogs and situations where he was needed, from the calving corrals one day to large, forested sheep grazing pastures the next.

He taught me that patrolling or perimeter type dogs are as valuable at their job of protecting the sheep as close guardians. He proved to me that high energy is not a bad trait to have. Having a strong lupine build, that could move,  was more advantageous than big slow cumbersome dogs when dealing with predators. Despite not being a dog that liked to be physically close to the sheep, it did not mean he was not bonded to them.  Having the space to work, the challenges of his job and ability to utilise his energy made him into a fine working dog. His ability to read the livestock become so finely tuned, that it really took my breath away to watch him work around an ornery cow, or a young ewe.

As he grew older, I made some attempts at retiring him, fearing he might be killed by predators. He wanted nothing to do with that and would take every opportunity to escape back to the livestock. During the harsh winter months, I would put him in the heated shop and then back in the pastures when the weather was milder, this is where he was happiest. This winter his health declined, and a few weeks back he passed away.

I am thankful that I have had the opportunity to work with such a fine dog, and that I had the right environment for him to be the best he could. I grew to admire and respect this dog deeply, and as he aged, he was more accepting of me cuddling him and I think he actually started to enjoy it!  He changed my perceptions of what a good working dog could be.  Over the years we bonded to each other, and I adored this dog, and he will forever be one of the great ones in my life, perhaps the greatest.

Vuk, no sheep or calves were ever lost under your watch! Thank you. 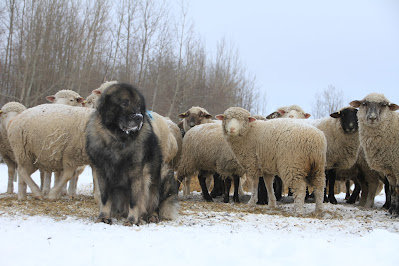