Sarplaninac
The Yugoslavian Dog - Sarplaninac (pronounced shar-pla-nee-natz) has been bred for centuries in the south eastern mountain regions of  (former)Yugoslavia.The Sarplaninac shepherd dog is , known for its loyalty, intelligence, and calmness.The dog demonstrates a possessive attitude toward family, livestock, and property. 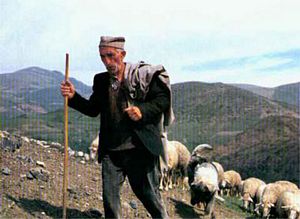 The name "Sharplaninec" is a Macedonian word, and means Shara Mountain Dog.
These powerful dogs have been guardians of flocks of sheep for thousands of years in the area of Shar Mountain (Sar Planina; Shara). 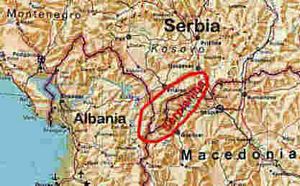 The breed was named after the Shar Planina Mountain range where it is the most common. This breed is indigenous to this region but also to other mountains in Macedonia, like: Korab, Bistra, Mavrovo and Pelister

Since Shara Mountain also extends into neighboring Serbia (southern Kosovo), the Sarplaninac dog can be found there. It has maintained many of its original characteristics due to the isolated locations, the large sheep operations and the danger to these sheep flocks by large predators.
Like many ancient breeds it is nearly impossible to trace the lineage  or ancestral make up of these breeds.  What is believed that due to the migrations of Balkan tribes north towards Asia and the Asiatic people moving towards the Mediterranean Sea either through exodus or following trade routes various breeds formed the basis of this breed. Dogs such as the Tibetan hounds and mastiffs, Assyrian war dogs and of course native local dogs were combined and slowly through many years of selection and breeding this breed evolved in this region.
The breed is registered with the F.C.I. since 1939 under n° 41 under the designation "Illirski Ovcar" (Illyrian Shepherd Dog). This region was known in Roman times as Illyria.  In 1957 the General Assembly of the F.C.I. accepted a motion proposed by the Yugoslavian Federation of Cynology to change the name of the breed to "Yugoslavian Shepherd Dog Sharplanina".  The breed is also known as sharplaninac, scharplaninac, sarplaninac, sarplaninec, charplaninac, sharplanina, sarplaninac, scharplanina, sarplaninac, scharplaninac Yugoslavian shepherd dog, The Macedonian Shepherd Dog Sharplanina and Шарпланинец; Шарпланинац 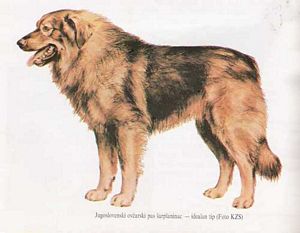 Drawing made by Janez Plestenjak, judge of Skofja Loka
The breeding of sarplaninac was controlled by the state and until 1970s and was not legally  allowed to be exported from Yugoslavia.The first to arrive in the U.S. was actually carried down from the mountains by mule. The Sarplaninac is still widely used in its homeland to protect flocks against predators.
Today Sharplaninac are being bred all over Macedonia, Serbia and other Balkan countries and also a growing interest  in the rest of the world.
Sarplaninac are used primarily as Livestock Guardian dogs protecting the large flocks from predators such as bear, wolf, fox, lynx and of course human thieves.    The livelihood of these semi nomadic shepherds depended on these dogs guarding the sheep flocks.  The sheep would be driven in the summer months to the high mountain pastures to be grazed.  The dogs would follow this transhumance and were expected to protect the sheep from these dangers.  They are courageous and fierce protectors of livestock, family and property and are fearless when faced with large predators.
In the Balkan region they are also used to guard cattle from predators. 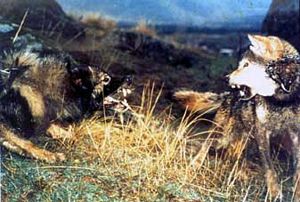 OTHER USE
Under the rule of Josip Broz Tito, the sarplaninac was used by the armed forces to guard military sites and strategic points such as barracks, munitions , radar installations.  They were used as patrol dogs and for pursuing prisoners and fugitives. Tito himself owned a sarplaninac that reportedly removed a bomb that was placed near to his master. Many sarplaninac that were used in the military were being cross bred with GSD and Caucasian Ovcharka to “improve the military dog”. 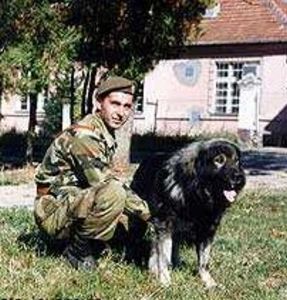 The sarplaninac needs to be handled in a fair, confident and consequent manner.  Sarplaninac is characterized by extraordinary strength and large teeth, making it a formidable adversary of predatory animals, they are strong and powerful dogs.They are serene and majestic, gentle with (their family's) children.
TEMPRAMENT
The sarplaninac is a calm, steady dog but fearless and quick to react to perceived threats,
and like many other livestock guardian dogs they are highly intelligent ,independent, incorruptible, devoted to family members and wary of strangers.  The Sarplaninac is a reserved and intuitive breed and can be  fairly stubborn and undemonstrative to strangers.  Dog-aggression and aloofness of strangers are common traits of the Sarplaninac as is its in born  territorial instinct.