Cows/Calves and of course the sarplaninac dogs 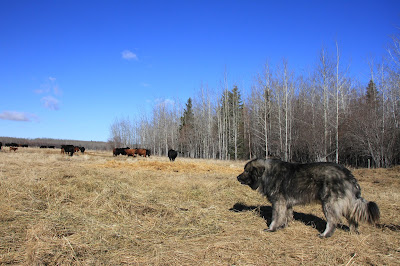 There are a number of points that need to be considered before you place a LGD in with the herd: 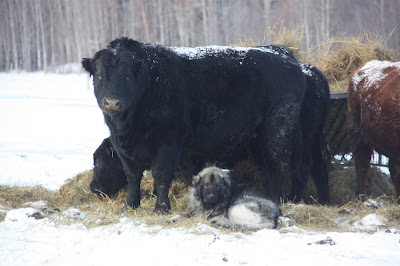 Livestock guardian dogs work the best where the livestock are contained/grouped/bunched in some manner. Containment does not only mean behind a fence, but in many areas will include flocks or herds that are shepherded /gathered together.
They work best in a well established pack and are highly socialized with the animals that are to be guarded.
Supervision and guidance of the dogs is a key element for the success of utilization LGD. 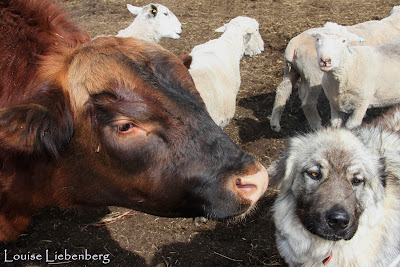 The most vulnerable time for cattle is during calving time and the period that the calves stay with their mothers until weaning. The majority of mature cattle can fend pretty well for themselves. The group of cattle that suffer the most depredation, are calves to yearlings. With heifers losing their first calves easier to predators than mature cows.

There are so many different ways to raising cattle that there really is not simply one system or way to integrate a LGD. What we have found to be successful is due in part  the way we raise our livestock guardian dogs and how we manage our cattle during the calving season.

Our system of raising cattle lends itself very well for the use of LGD.
Our ranch is in the Northern part of Alberta, Canada and we have all the large predators; bear, cougar, wolf and coyote. We regularly see these predators on and around our ranch. Our ranch is partly open and has a lot of bush and forest. We are close to a National park and are surrounded by forest. We have a herd of 80 black and red Angus cattle in combination with a breeding flock of ewes, and raising feeder lambs.


We calve the cows in April and May, in June we take the cows and their calves to pasture. This is to land we rent and is away from our home ranch.
The cows graze from June to end of October on these pastures and then before the snow starts in winter. Our cattle return home after the grazing season in fall, and are fed on large wooded pastures around our ranch. The calves are weaned and sold in fall, only the replacement breeding heifers stay on the ranch. They are usually kept closer to the barn area and are fed and supplemented extra grain over the winter. The bulls are removed from the main herd and are pastured together with the breeding rams. The cow herd, are kept on fields we want to reseed in spring and by feeding them on this area over the winter we can ensure more manure and organic matter on that field.
The cattle are in three different management groups over the winter.
As soon as the cows return home after the grazing season, we will normally place 2 to 3 adult LGD in with the main herd. These cows live with these dogs the entire winter.
Most of our cattle, have grown up with LGD and are comfortable with them. 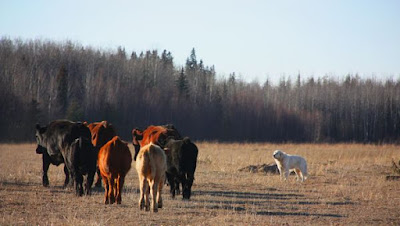 When the cows start to calve, the mother cows become super vigilant and can be very aggressive to the dogs, which is why we only have adult and experienced dogs in with the cattle during calving. These dogs need to know to how to avoid a very aggressive cow, how to check up on the calves without being too intrusive and not become intimidated by the cows.

The dogs will often check up on a newborn calf without getting too close and upsetting the cow. They will do a slow walk past any newborn and remain at a respectful distance. After a few weeks the mother cows relax more, and we often find the dog babysitting a group of calves while the mothers go off and graze, drink or eat grain. These dogs stay with the cow herd until all calving is done. 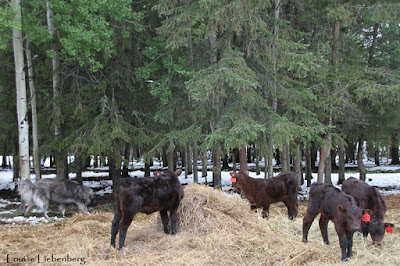 So, how do we get the LGD to this stage?
I believe that the dogs do not form as tight a bond with the herd as they do with the sheep. . I have found our dogs  really enjoy being with the cattle. The dogs do form  individual relationships with specific cows. The dogs  are perhaps a little more territorial  rather than being herd protective.
The dogs ensure that predators stay out of this area.

This is how we raise our pups to ensure they become reliable adults with both the cattle and the sheep.
The pups are born in the barn, are raised with sheep and are never ever away from any livestock. The pups can see some cattle through a fence, but are protected from them. We are really careful to ensure that no pup gets hurt by the livestock, pain and fear are not good for the bonding process. A pup that is fearful of the stock will not make a good LGD. They grow up seeing cows, sheep and horses.

Up until about 4-5 months old, the pups live with the sheep. Once the young dogs is around 4-5 months old he is placed in the bull and ram group. The bulls are steady and calm, they will generally not mess with a young dog. The rams are in this same area so the dog has both cattle and sheep to bond with. We also keep some horses in this area.

This “bonding” period is the period that the young LGD learns to “read” and understand the behavior of the livestock. It is the time when it learns to get out of the way, to understand a head toss, or the butting behavior of the sheep. They learn to be attentive of the livestock and their behavior. It is also the time we teach the young LGD to respect fences, to tie, walk on a lead, and other basic handling. We never remove the young LGD from the stock but we do pay attention that the LGD does not show any undesirable behavior. Supervision is key. We do not micromanage the young dog as it really does need the time to be with the livestock. We will often place the young LGD together with a good, steady adult dog so that good behavior is modelled. This older dog will bark at threats, patrol and generally show the young dog what is expected of him.  In this pasture we will set up a few cattle panels in the corner of the field. This is the safe place for the young dog. The dog can go through the panels, and the cattle cannot get into this area. This “safe place” is a place for the young dog to be able to rest, eat and sleep. The dog can chose to go and sleep in this area or it can chose to sleep out with the cattle and sheep. The safe place is primarily for the young dog to have a place where he can eat and sleep unhindered. I have found that a pup only uses this area for the first few days until it is comfortable with the stock, and then only for feeding time.

The young dog will remain with this group for a number of months, after which we will often move the young dog and the older dog, to the heifer group. The heifers behave totally different to the bulls. They are more curious, run and buck, are more energetic and will often seek out the dogs for some interactions. 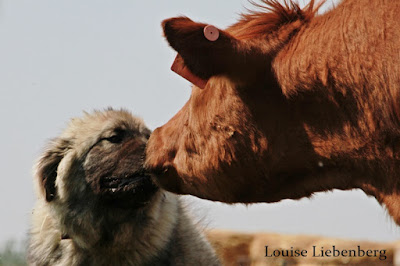 Our goal here, is just for the young dog to learn to deal with all types of livestock, not to get excited when the heifer's are playful. The dog is physically stronger and quicker and can generally get out of the way of these young cattle. It is also an ideal time for the heifers to grow accustomed to the dogs, and be comfortable with them. This is also the time for the heifers to have a reminder that the dogs are not to be feared. Our cattle graze away from our ranch for the whole summer, so once they leave the ranch, they do not see any of the LGD for 3-4 months. The last time these heifers saw a LGD was when they were baby calves. The heifers and the young dogs often form quite strong bonds. 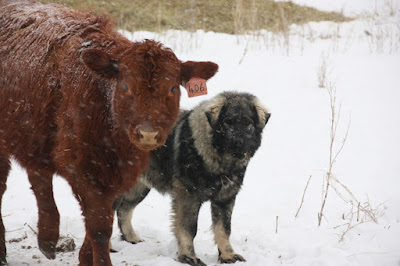 The heifers are later integrated back into the cow herd, once the herd heads off to pasture. We will usually only allow a 2 year old dog in with the calving cows, this is when the dog has mentally matured, physically matured and knows the routine. It is also old enough, to handle any possible predators it may encounter. The young dog always has back up of a few older adults in this time. If the dog is too young, or mentally not ready to deal with the mother cows being super aggressive towards them, this can really intimidate the dog. The older dogs can better deal with a wild, aggressive cow than a younger dog. Our older dogs understand the need to give the cow with a newborn calf space, not interfere and not to rush in to sniff or lick the calf. 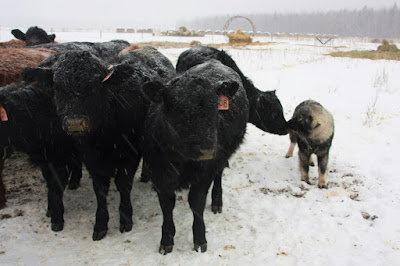 The initial bonding period to all the different livestock, and horses ensures that the pups grow up well rounded, they understand the different behavior patterns of the different livestock.  We will often find the dog laying with a weak calf, or watching over one that is sleeping in the bush. Some of our dogs do try and break up any bull fights. The cows soon learn to trust the dogs babysitting the calves. 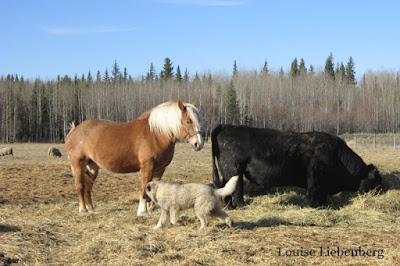 I believe the important part of integrating a livestock guardian dog with cattle is to have initially quiet, non-aggressive cattle for the young dog to bond with and learn to “read” the behavior of the stock. As the dog matures, he is then introduced to cattle who are more playful, and curious. The dog needs to be calm enough not to chase any of the cattle through fences or upset them. The dogs must remain calm and steady. Only when the dogs is mentally and physically mature do we allow them to go in with the cows who are calving. 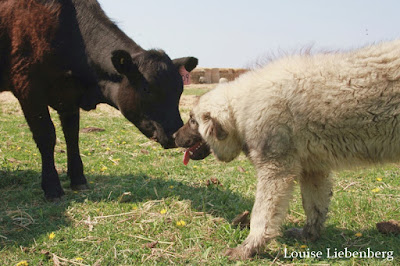 Introducing new bulls is usually a stressful situation as these bulls fight and push and shove. It is good for the young dogs to learn this behavior and as our dogs they will often intervene and try to separate bulls who are fighting. 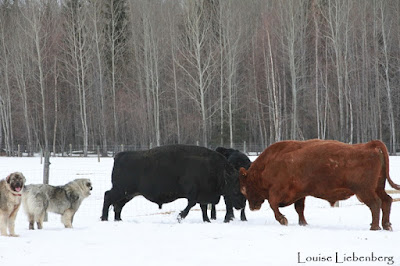 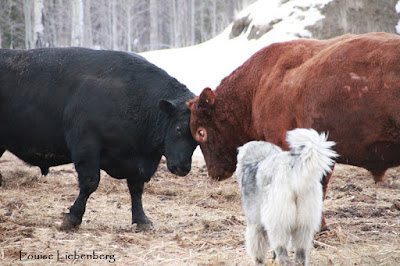