This is the second part of a small mini-series on other animals that can be used to protect sheep from predators. The two most common “go to” guard animals, other than livestock guardian dogs (LGD) are donkeys and llamas.  This article will take a closer look at llamas. There have been very few studies done on the use and effectiveness of guard llamas, most of the articles and stories are anecdotal rather than hardcore scientific research. In the 1990’s, Iowa State University did a telephone survey to try and look a little closer at the effectiveness of using guard llamas to protect sheep from predation.

For those who do not know llamas are camelids that originate in South America and were domesticated for meat, fibre and utilised as pack animals. Llamas should not be confused with their smaller counterpart the alpaca. Alpacas should not really be used as guard animals due to their small size, in areas with apex predators. Alpaca’s might be a good option for smaller animals such as racoons, or foxes and for guarding smaller livestock but will not be able to contend with grizzly bears or wolves.
Llama’s can weigh in the region of 250 lbs making them a fairly large sized animal, while alpacas are in the 120-140 lbs range.

Due to their height, they certainly have an advantage that they can see further than sheep can. They behave like sentry animals, and due to their alertness are quick to warn for any dangers, they can make a variation of vocalizations, which the sheep soon learn to respond to. Llamas can run, stomp, strike, kick, and spit at predators. Often it is also the larger size that can dissuade predators.  Llamas can be quite territorial about their pasture even occasionally being aggressive towards people who approach the pasture.

Llamas are generally quite effective against smaller predators such as coyotes, foxes, skunks, and racoons. They do however prefer open, flatter spaces than wooded hilly areas, it has been reported that llamas will not really enter forested or bushy areas. Llamas seem to perform best on pastures smaller than 250-300 acres and up to about 300 ewes.

Llamas who are well bonded to the sheep are the most effective at their job. Similarly with livestock guardian dogs and donkeys, it is imperative that the sheep and the guard animal form a bond. Without this bond, no other species will feel the need to protect the sheep from predators. It is also generally advised that just a single llama should be placed with the ewes, so that it remains bonded to the sheep rather than forming an attachment to another llama and forgetting about the sheep.  There is a bit of an adjustment time for the sheep and llamas to get to know each other but when raised from a young age with sheep, this period can be a matter of a few weeks before both species are comfortable with each other. As intact male llamas can become quite aggressive towards the sheep and might try to breed/mount the ewes, it is always advisable to geld the male llamas. Female llama are also used successfully. In the 1990 study, most producers preferred using gelded males.

Keeping llamas requires similar management to sheep. They graze alongside the sheep and when the flock needs deworming, hoof trimming and shearing, so does the llama. It is advisable to halter break the llama so that it can be easily removed from the flock when routine work gets done, or for ease at shearing time.

Here are some  interesting  results from the Iowa State university study regarding the use and effectiveness if guard llamas:
Most guard llama’s were gelded males.
80% of llamas were rated as “effective or effective at reducing losses to predators”.
88%  of owners were  either “satisfied or very satisfied” with their llama program.
Over half the producers felt that llamas provided some savings by reducing predation.
75% of the llamas were reported not to negatively affect the sheep they were protecting.
Predation fell  from 21% to 7% after a guard llama was introduced to the flock.
Sheep losses before llamas were noted to be around 11% and after the llama was introduced losses declined to about 1%. One does need to bear in mind that all producers continued to use alternate methods to reduce predation in conjunction with the llama (fencing, shooting, trapping, poison etc.)
predation increased when multiple llamas were introduced to the flock.

Llamas have been observed in South America aggressively chasing away foxes but did run away when mountain lions appeared.
llamas are found to be less effective when it comes to packs of coyotes or dogs. One llama is not able to contend with multiple predators at the same time. One should remember that llamas are also prey animals to large predators, and this could put the llama in serious jeopardy.

As with all guard animals there are always pros and cons, here are a few considerations:

Due to the innate aggression towards smaller canine, it may be difficult to use herding and guard dogs with a llama in the pasture.
Although easy keepers, they do require some specific management, it can be hard to find someone who will come and shear a llama, they require more copper than sheep do and often do not utilise hard salt or mineral blocks and require these in a “loose” form.
Llamas vocalise fairly softly when there is danger, usually if a guardian dog barks the shepherd or rancher can hear by the barking that predators may be close by.
A barking dog can also provide some protection to the farm, something that a llama does not do.

I think on small homesteads, or farms with neighbours close by, a guard llama might be a better option than a guard dogs, particularly on homesteads where the predators are smaller and the number of animals requiring protection are less. Llamas will not keep the neighbours awake from barking, they integrate rapidly in a small sheep or goat herd, they can provide more fiber options on fiber-based homesteads, they can become well socialised and tame and can be trained as pack animals and in some areas even hiking companions.  Llamas do not dig out or actively try to escape fences like guard dogs sometimes do. Llamas can live for 20-25 years providing many years of protection to the sheep flock. In some cattle operations guard llamas are used to help protect newborn calves from coyotes.

Recognizing that llamas are also prey animals and understanding their limitations, I do think llamas are a good option for many smaller pasture-based operations. The provide another layer of protection to the flock. Llamas can become very devoted to their flock and the sheep really seek out the companionship of the taller and bigger animal. 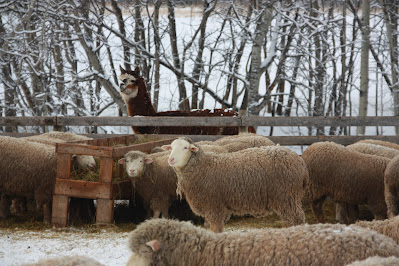 This alpaca was added to a group of young ram lambs to provide an additional layer of protection for the flock. This operation also uses guard donkeys with their ewes.