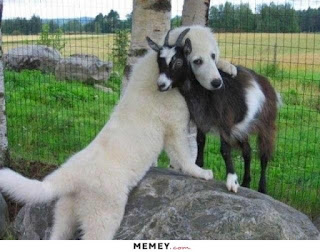 This article appeared in the Shepherds Magazine

Let me paint a picture for you; the owner walks outside to go and check on the livestock, do chores, feed, and water.  As the owner approaches the area where the livestock and their now adolescent LGD reside, the owner see’s that the livestock have tufts of wool pulled out, the ear of a sheep is bloody, the stock is standing tightly in the corner of the pasture and are they are panting. Further away, the LGD is standing guard over one animal.  The owner looks around and immediately thinks that perhaps coyotes paid the flock a visit. The LGD comes up to meet him, the dog is a little excited but nothing really concerning. The owner is concerned for his flock, and while checking the animals over is somewhat relieved that at least the young dog was “guarding” or protecting the one animal further away. Except for the bloody ear and the few tufts of wool, everything is okay.

A few days later, the owner once again notices the dog sort of “herding” the sheep together. Nothing concerning, just an observation. The owner wonders if the dog is herding the sheep to keep them safe.
A day later, the owner catches the young dog standing over the same individual animal, the sheep is separated from the others, is not hurt, but is wet from slobber from the dog. Another few days’ pass, and the owner comes to the livestock and see’s that all the wool has been plucked off that animal, it has scratch and bite marks, the sheep is badly hurt.

The owner is in total disbelief as this dog has been so good, and why now, is the dog suddenly harassing the animals it is supposed to protect? Is the dog ruined for life? What is happening?

The scenario I have sketched has many variations, however most of what I have described are typical of a young adolescent dog harassing the livestock.

Understanding this behaviour and, learning what the warning signs are, may help you stop this behaviour before it escalates and the dog becomes a stock killer. Just this past week, I spoke with someone who had a similar build up of events, the result was dead livestock, and the dog being shot. A tragedy that could have been prevented had the owner been more aware of what was going on.


Most LGD pups show excellent behaviour around the livestock; they sleep with the stock, are respectful and the young pup seems to be bonding well to the animals it will guard in the future. The owner is thinking that they have hit the jackpot regarding LGD, until the above scenario starts to play out. The owner is most times caught off guard and is devastated to find that the dog has turned “rogue”.

It is hard to say why this behaviour occurs with some LGD, it could be poor breeding, or it could be hormonal (the teenage phase), or be triggered by new animals being brought on to the farm, even a change of events (lambing time), sometimes we just do not know why the dog goes from being good one day to being rough with the stock the next day. Understanding the behaviour, and having the ability to recognize the warning signs may prevent damage to the livestock and by intervening earlier, may prevent the dog from escalating this behaviour.


Unfortunately, when this type of behaviour happens, it is unexpected. Most owners have missed some of the subtle “warning signs” indicating what is going on in the dog’s mind.  Some people are initially in denial, that their guardian dog would do such a thing, they discount the warning signs.
Unfortunately, some owners will dismiss the behaviour (he is just playing, he is guarding just the one animal, he is “hugging” the stock, he is herding them to safety), and this dismissal is the start of a cycle of problems. Most young LGD do not go from zero to killing stock overnight. The dog does give clear signals in his behaviour what is going on in his mind.

What is prey drive? Well, simply put it is the driving instinct in any predator to hunt down, catch and consume its prey. It is an instinct in every single predator, including our dogs. Dogs, with a high prey drive are easily stimulated to chase after and catch their prey. It is an instinct that is often used in the regular dog training world as it is highly rewarding for the dog to do. Usually the “prey” is a toy, ball, or a tug of war game. The reward for fetching the ball, or finding the “lost” person, is for the dog, getting to play ball. Dog trainers capitalize on this instinct to motivate and reward the dog.  For some other high drive breeds, this instinct is “modified” to become a useful tool, the border collie utilizes this same instinct to herd sheep.

Prey drive is a not just a single action, it is a chain reaction, with the following elements; search (see, hear, smell), stalk, chase, bite hold, kill bite, dissection and then consuming.

Watching nature films with lions hunting on the savannah, we see this sequence in action. With the border collie, we can clearly see the dog gathering the livestock, then it uses its “eye” to stalk, herding the stock to the handler (chase), and it will do hold type bites if needs be. For most border collies, the sequence is ended at this point.
Selective breeding in border collies is focussed on optimizing this part of the sequence, to have a great working dog.

As LGD are bred to have a very low prey drive, their reactivity to wanting to chase after things that are moving is low. Most LGD will watch you throw a ball away, but very few will be motivated to go and fetch it.

To perfect the whole prey drive sequence, predator babies need to play. Through play they learn to initiate the game, they learn how to stalk, how to pounce, how to chase. Playing is very important in all predators, play teaches a myriad of lessons such as how social structure works, team work and of course, ultimately how to hunt. Play behaviour is the precursor to the prey drive sequence.


Back to the original example, at some point the young LGD does become stimulated by the livestock, initially it might have started off with a play bow to the livestock. The dog wanting to initiate play with the stock. As sheep, generally do not respond to this, they might have moved away, triggering the young dog to maybe chase a little. This of course is fun and stimulates the dog, as this is a self rewarding behaviour,  the dog will often toss in a bark or two towards the livestock to get things moving. The dog then starts to escalate his game, to the point where he is showing elements of the prey drive sequence. He will stalk, corner, chase, nip, pull wool, separate his prey, harass. The escalation from a simple play bow to harassing or even wounding the livestock, can be very rapid, as the dog is getting self rewarded for what he is doing.

An owner may wake up one day and see the consequences of what started out as seemingly innocent play behaviour, to finding hurt and injured stock.

Here is a list of some of the warning signs.
Remember, warning signs are indicative of what is going on in the dog’s head.

1. An overly  playful/immature dog, ( even older dogs)
2. The dog that play bows to the livestock, trying to initiate a game.
3. Dog likes to mouth your hand, and or the stock
4. Chasing the livestock
5. Nipping at the legs.
6. Standing on, mounting the stock.
7. “Holding the stock” either with its paws or mouth.

8. Herding or pushing the stock around.
9. Keeping them cornered, or in a group or not letting them move about freely.
10. Controlling/dominant behaviour, not allowing stock close to "resources, such as feeders, water etc)
11. Staring, stalking, hard focused looks, lower head and staring.
12. Pulling wool.
13. Scratching or pawing the stock.
14. Disrespectful or rude behaviour, barging through the stock, bumping them.
15. Stock that is tired, panting, restless, uncomfortable when the dog approaches.
16. Running and nipping at tails, and ears.
17. If the dog is excited, stimulated, hyper-attentive when the stock move around.
18. Separating one individual, standing over it, often the same animal.
19. Barking at the stock.
20. Humping the stock. 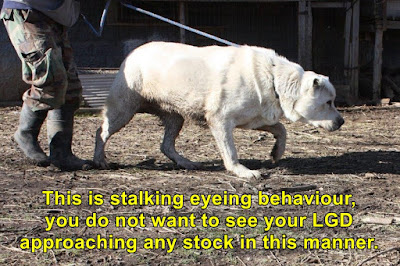 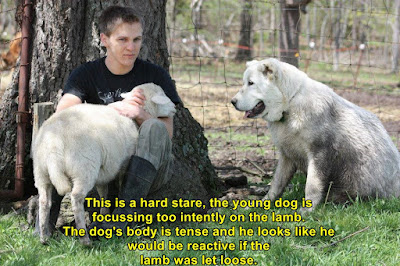 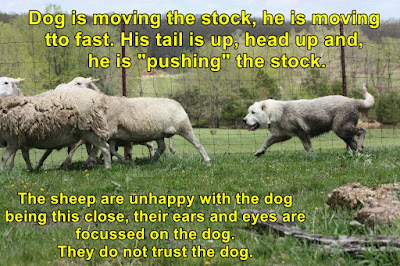 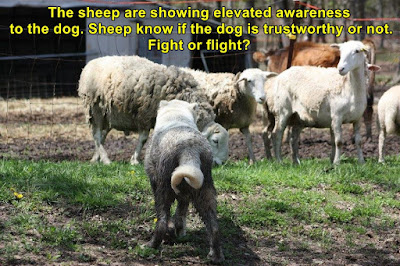 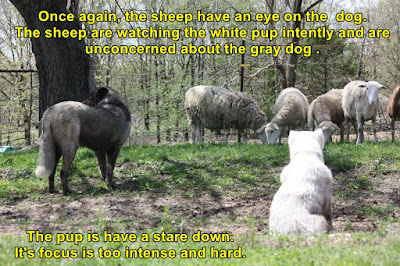 Being attentive and giving a timely correction for any of these warning signs may mean the difference between a successful LGD or one who becomes a stock killer.

Part 2, will focus on the good behaviours!