Walk in the woods

Our day started off with this:

We had about a foot of snow and by the end of the day it would be close to two.
Where the wind was blowing it went to about 3 feet.
All our morning chores meant plowing through the snow and breaking trail.
It was a slog.
Feeding took longer as the gates had all snow drifted in and we had to dig our way out.
As the cows are calving, it was a priority to get our there and check and make sure everything was ok.
While out checking, I found two newborns.
Both were deep in the woods, protected from the wind and laying under big spruce trees for cover.
They were dry, had sucked and had good mommas.
I noted where they were and then went back to finish the rest of the chores with Eric.
After lunch we went out to tag, castrate and check the new babies.
The one was where we had left him.
We managed to vaccinate and tag him but his mom was getting more and more agitated.
We did not want her charging us in deep snow as we would not be able to get away.
Running from a raging cow in deep snow is just not a good plan.
So, we made a note to "do" him later again. 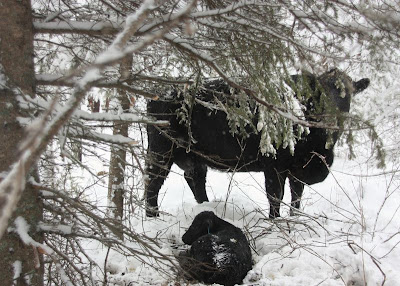 Off we went to find number two.
We could not find him so quickly and decided that his mom had hidden him in the bush somewhere.
We would check later again.
Later came,
and we went out to find the second baby.
We went to the last place we saw him...
he and his mom where not there.
We looked around the other cows, we looked at the feeders, we looked behind brush piles, we looked behind trees.
Nothing.
So, we decided to take a walk deeper into the woods. 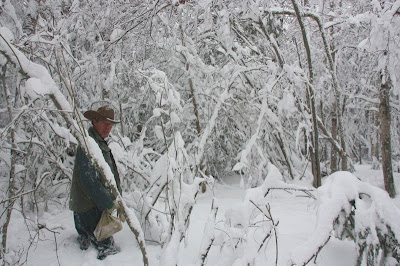 Eric was leading the way, breaking a trail.
Every step was thigh deep.
Climbing over fallen trees,
bush whacking through thick under growth,
every step,
every bump of a brunch resulted in a snow shower. 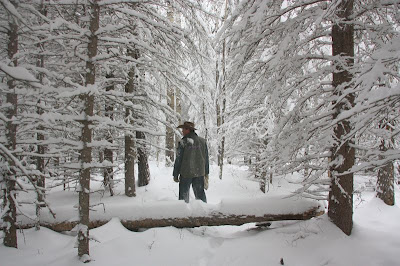 The plan was we would first head west,
then turn south at "the clearing",
finding the back fence and the making a loop back.
We walked, we climbed, I made photo's, we walked some more.
We never did find "the clearing". 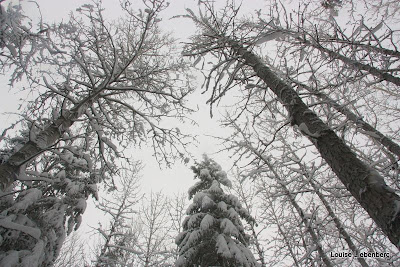 I suggested to Eric that he was heading in the wrong direction...
And, like most males, he disagreed.
So, we slogged on.
I reminded him that I had a compass on my iPhone...
nope he knew the way.
After lots more slogging I asked:
"are we lost?"
All I got back was a quiet "yes".
﻿
﻿Luckily, the fresh snow and the  woods were magical.
The walk was beautiful and we were enjoying ourselves!
So, once again I suggested which way to go,
as my sense of direction was still intact...
We followed the sound of some ravens, took my advice
and a while later we out in the open.
﻿We had turned north in our wonderings
and had ended up in a completely different direction.
﻿So, we plowed on, found the cows again,
but never found momma cow and her baby.
So, today we will be out in the woods for another wonderful walk!
On out walk back we saw this eagle: 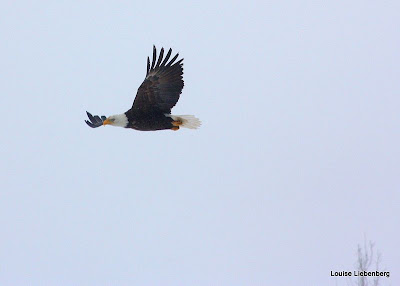 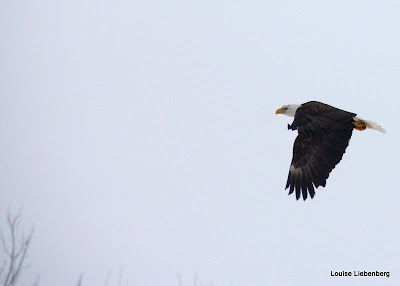 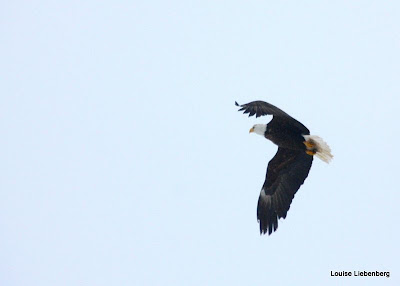 It was truly a magical day in the woods,
and we get to do it allover again today! 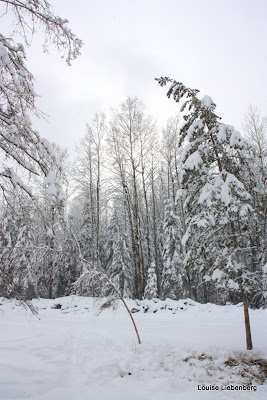