The added benefits of living and working with LGD 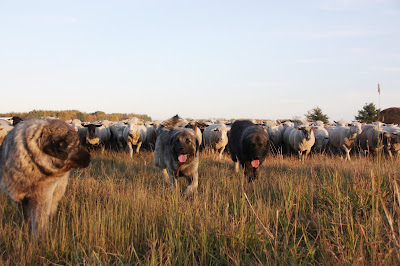 The job that livestock guardian dogs do is often more than “just” protecting the livestock, when living close to them, and having direct contact with them, one soon see’s the other jobs that the dogs do. I would like to share some of these anecdotes of things I have experienced with our Sarplaninac dogs.

Every morning, when I go out to the pasture to feed the dogs and check on the sheep, I always have a slight feeling of apprehension, we live in a very predator rich area, and our ranch has borders some wild country. Most mornings, the dogs are waiting for me at the gate. Feeding is a highlight and they usually are right there waiting for it. When one or more dogs are not at the gate, I start worrying, I run different scenarios through my head: is a dog hurt? Are they out patrolling?  Has something happened during the night or has something happened to the sheep?
The ewes were bale feeding at a fair distance from the gate, so I quickly checked over the field, to see if I could see if something was out of place. Ravens in the pasture are usually an ominous sign and often the first indicator of what I might find.  Mali did not come for feed.  No ravens. Ewes calmly feeding all seems calm.  I call to Mali but she still does not come. I start to walk out to the ewes, and call again.  I see her sitting up. Ah! She is there! As I get closer, I still do not see why she has not come. As soon as I am within 10 meters (30 feet) she bolts off to her food. I look behind a bale and there are just the legs of a sheep sticking out from under a bale. The poor unfortunate sheep must have lain down by the bale, and the bale must have toppled onto the sheep, killing the ewe, sometime during the night.
Mali was lying with this sheep, keeping the ravens and possibly other predators at bay. As soon as I was close enough, she must have decided that the dead sheep was now my problem, and she was free to go and get her food.  I really like that my dogs do watch over the dead stock, as I find it important to note down what the animal died of. Finding a dead sheep under a bale can be tough, Mali alerted me to this ewes’ position.
In the morning, my dogs are my first indicator of how the night went. If the dogs are hyper-vigilant, do not come for food, or if the dogs set themselves up in semi circle around the flock, facing towards the bush are tell tale signs that predators are in the area. For more than a week we noticed that our dogs were being very “guardy”, very alert, focussed and all business. We had a feeling that something “big” was out there, but did not know what.  It was only later that we had heard that a cougar had killed our neighbor’s colt that week, and that explains the behaviour of our dogs. The dogs certainly do help tell us what is going on. We might not always understand directly, but we have learnt to pay attention to the dogs. 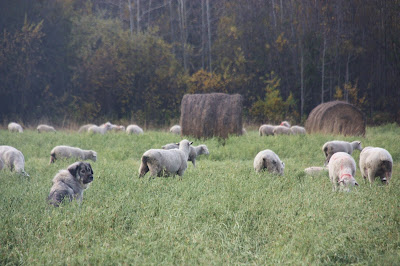 A similar scenario happened a few years ago, none of the guardian dogs came when I went to check on them, after quite a search I found the dogs hanging out close to a rather big hole in a bush pasture. The dogs came to greet me as soon as they saw me, but quickly bolted back to the hole. I could not see anything out of the ordinary and carried on with my sheep checks. A while later, the dogs still did not leave that spot. On closer inspection, deep in the hole was an ewe, stuck. Her whole body was about 2 meters down the hole. With plenty of tugging, we got the ewe out alive and well. Had it not been for the dogs, I would probably have not found her and she would have died in that hole. Good dogs. 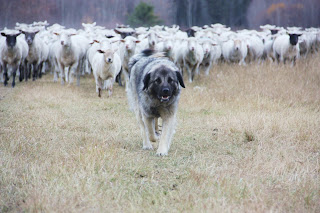 Some of the anecdotes are also not specifically sheep related. We usually have between 8 and 10 guardian dogs, they work in various groups and numbers as we need them. Sometimes running four or five intact females together can create a lot of tension and some “bitchy” behaviour. My two oldest females did not always see “eye to eye”, but for the most part they tolerated each other and settled on a truce. As my oldest female started to age more, and developed some health issues, it became apparent that the other female started looking out for her more and more. If the older female decided to stay out in the bush during the night, then the younger dog would head out and stay with her.  When one of the other dogs tried to bully the older female from her food, then the other female would step up and intervene allowing the older girl more time to eat. Many times, I would feed, and the younger female would just sit with her back close to the old girl ensuring that none of the other dogs came closer. These small acts are very endearing to see and experience. 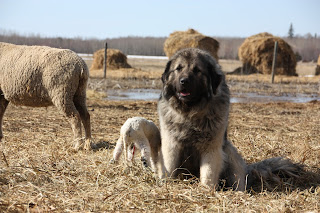 The final story I would like to share today happened over 20 years ago, when I was shepherding in the Netherlands. This story I want to share with you, turned out to be one of those moments, that when you look back at it, you realize your life might have taken a very different course, had things not gone the way they had.

Every day I would shepherd the sheep on the heather or in the forested areas of the nature park the Maashorst in the Netherlands. A few trusty border collies, Chantal my livestock guardian dog at my side and about 4-500 sheep. Every morning, I would take the sheep from their night corral and walk them to the area that would be grazed that day. Some days, I was closer to a cycling path or a route where people liked to walk, other times it was a little more off the beaten track.
Never, in all my life have I ever felt scared while out in the bush. Not in South Africa, not in the Netherlands and so far, not in Canada.  In those days, we did not have cell phones, so if something happened, I would have to wait until someone missed me enough, to come looking for me, or in a worse case scenario, that the sheep would drift away and end up in someone’s yard and then the irate owner would come looking for the shepherd.
Most of the time, when you are out shepherding in a busy country such as the Netherlands, most people would stop for a chat. On a nice sunny day, I was shepherding in a remote area of the park. This was a place where you did not just bump into someone, it was off the beaten track. The area was wooded, with quite a lot of grass growing under the tall trees.
I was sitting down reading a book, when Chantal (our first Sarplaninac LGD) warned me that someone was approaching. I looked around and saw a man watching the flock at about 300meters away. This was not unusual and so I did not mind too much. He stayed quiet some time, just leaning up against a tree watching. The next day, I headed off to the same area with the sheep, collies, and Chantal. At about 11 am, Chantal stood up and warned me that someone or something was in the area. I looked around and spotted the same man as the day before. He was a little closer now and was once again just watching. I felt a little creeped out, as most people would either watch and move on, or watch and then come over for a chat.  He disappeared into the woods.
Sometime later, he reappeared again in another spot. He never approached me, just watched. I could recognize him in his light tan leather jacket and jeans. Chantal would be giving a low growl and the odd woof.  I kept her on a leash, close to me as I did not want to have an incident with my large dog and a tourist.
He spent a good part of the day in the area. That evening I mentioned him to my husband and he suggested I phone and chat with the police. I did that but they said if nothing happened and he was not doing anything illegal, there was not much they could do. I realised they were right, he was doing nothing wrong just watching the sheep eat. Day three; back in my corner of the woods. Chantal was on her lead by my side. Three collies with me, spaced out watching the sheep graze. I was sitting on a little stool attached to my backpack. Chantal sat up and rumbled. I looked up and saw the same man walking purposely towards me. I knew, and felt that something was going to happen. His intention was different and he was walking directly towards me. I stood up as I felt a bit vulnerable sitting down.
As he got closer, I felt the tension; I kept Chantal close to me, my hand on her collar. I was standing, he was striding down that bush path, he went on past me, kind of nodded his head at me, I felt relieved, when suddenly, he turned and grabbed me.  Within a second, Chantal lunged and bit him on his arm.  He pulled loose, started screaming and yelling at me, then turned and ran off. The level of commotion was high, I was shaken, Chantal was hysterically trying to drag me after this man, the collies, in the excitement were running around trying to gather up the sheep. I was quite shaken.
I moved the sheep to a more public spot, and kept a look out all day. I never saw the man again. That night I spoke with the police and they would keep an eye out for him.


I do often wonder about the “what ifs”, what if I did not have Chantal with me that day? What if she did not bite him, what would have happened? I also wonder if that man was just watching me for a few days, sizing up the collies, sizing up Chantal, waiting for an opportunity.
Having a free-range guardian for animal predators is great, but it sure is nice to have one right with you, next to you, on a lead, at the end of your arm, to keep the scariest predators of them, all at bay. 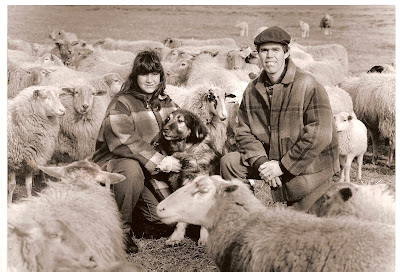 I am sure many of you can share similar stories and anecdotes about your LGD.