I have been struggling with this post,
as I am feeling both sad and guilty.
Sheila died yesterday while doing a flock move.
I needed to move the ewes and lambs about 1km,
across a pasture, and through another to get to the new place to graze.
It was fairly warm out, but not so bad as so be of concern.
Our dogs have worked in arid, dusty, and hotter days.

The first part of the move went well, the ewes were keen to move a long.
Sheila and Lad just needed to tuck in the corners and make sure all the lambs came along.
The first pasture went well.
As we went through the gateway and turned to go on through the hay field,
I noticed that Sheila had stopped working.

Now, Sheila is not the quitting type of dog.
She, is a real shaker and mover
and flock work is her forte.

I moved on with with the flock and Lad,
thinking that Sheila would catch up again.
It was getting hotter in the long grass and the sheep were becoming heavier.
Lad was having a hard time pushing the sheep on and the sheep had no intention to move on.

I called Sheila but did not see her.
Lad and I pushed forward and got the sheep almost to the new pasture.
I saw that Lad was completely done,
so decided to stop and go back, collect some extra electric nets.
I decided to just fence the sheep where they were.

On the walk back, I looked around and called for Sheila,
I was mildly concerned as I know that Sheila actually never quits her working.
She may take a drink in a pool or lay down in a puddle of water,
but she always comes back to the sheep.

As I walked back home with Lad,
I found her laying in the grass,
she could not move and her eyes where glazed over.
She wagged her tail but could not lift her head.
We were a long way from any water, so I decided to leave her in the shade go home,
collect the vehicle and  get water to her.

Lad and I walked back home the kilometer,
I stopped at a stock tank to cool and water Lad as he was very tired.
I settles Lad in the Shade, grabbed a vehicle and some water and went back out to fetch Sheila.
She was in a bad way.
I cooled her down, tried to get her to drink some water.
I placed her in the air conditioned car,
phoned the vet to see if I could bring her in immediately and ask what else I should be doing to help her.

While on the phone to the vet,
I heard a big sigh.
I knew she had died.

I am heart broken for having lost this gallant little dog.
She was my 2nd go to dog on our ranch.
She excelled as a flock dog,
was stubborn and determined.
I have had many days where one moment I am infuriated by her stubbornness
and the next moment am in awe of the ease that she can get a heavy flock to move.

She was a worker,
no fancy trial dog.
A "get her done" type of dog.
She would work for anyone,
and was Roy's dog for when he needed to move sheep.

I am at a loss,
the unexpectedness,
the randomness,
and the sadness
it feels almost unreal.

She was a good little dog
and will be greatly missed. 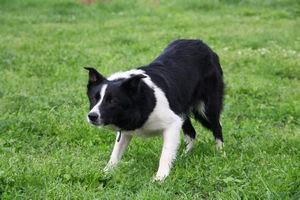