We have an old red Angus cow.
She was old when we bought her,
and she got 5 years older with us.
She is the mother of a few 4-H calves and our last breeding bull.
She was one of those cows that was easy to be around,
and it was always great to be able to go out and say hi to her.
She was affectionately called BJM.

Last year, after calving she got a uterus infection.
She was in bad shape and we decided that if she made it,
we would ship her in the fall.
Fall came around and she had raised another good calf.
She looked great for her age and was tested pregnant again.

Against, perhaps, better financial judgement we kept her
and decided to calve her out this spring.
The whole winter was a battle and she lost weight.
She was placed into the "higher feeding" group to help her along.
She was doing good, until about 10 days ago.

She went "down".
She just could not or would not stand up anymore.
A few times a day we walked  back into the pasture to feed her, water her and bring her some grain.
We treated her with Calcium/Magnesium in the hopes it would get her up.
We tried lifting her with the tractor, rolled her over from side to side,
but she just would not get up.
Her head end was alert, but her back end would not cooperate.

About two days ago she started to bloat and prolapse.
Yesterday, we decided we could not prolong this.
She was never going to walk again
and a slow decent into death was not what we wanted for this old cow.
We decided to shoot her.
We do not own a gun so asked our good neighbor Dale,
to please come and shoot her for us.

We decided that we would try a "ranchers C-section" on her,
as she was not far off calving.
So, she was shot and immediately Eric and Dale,
cut open the dead cow and pulled out the calf.
Wonder above wonder,
a lovely,
almost full term little red heifer calf was born. 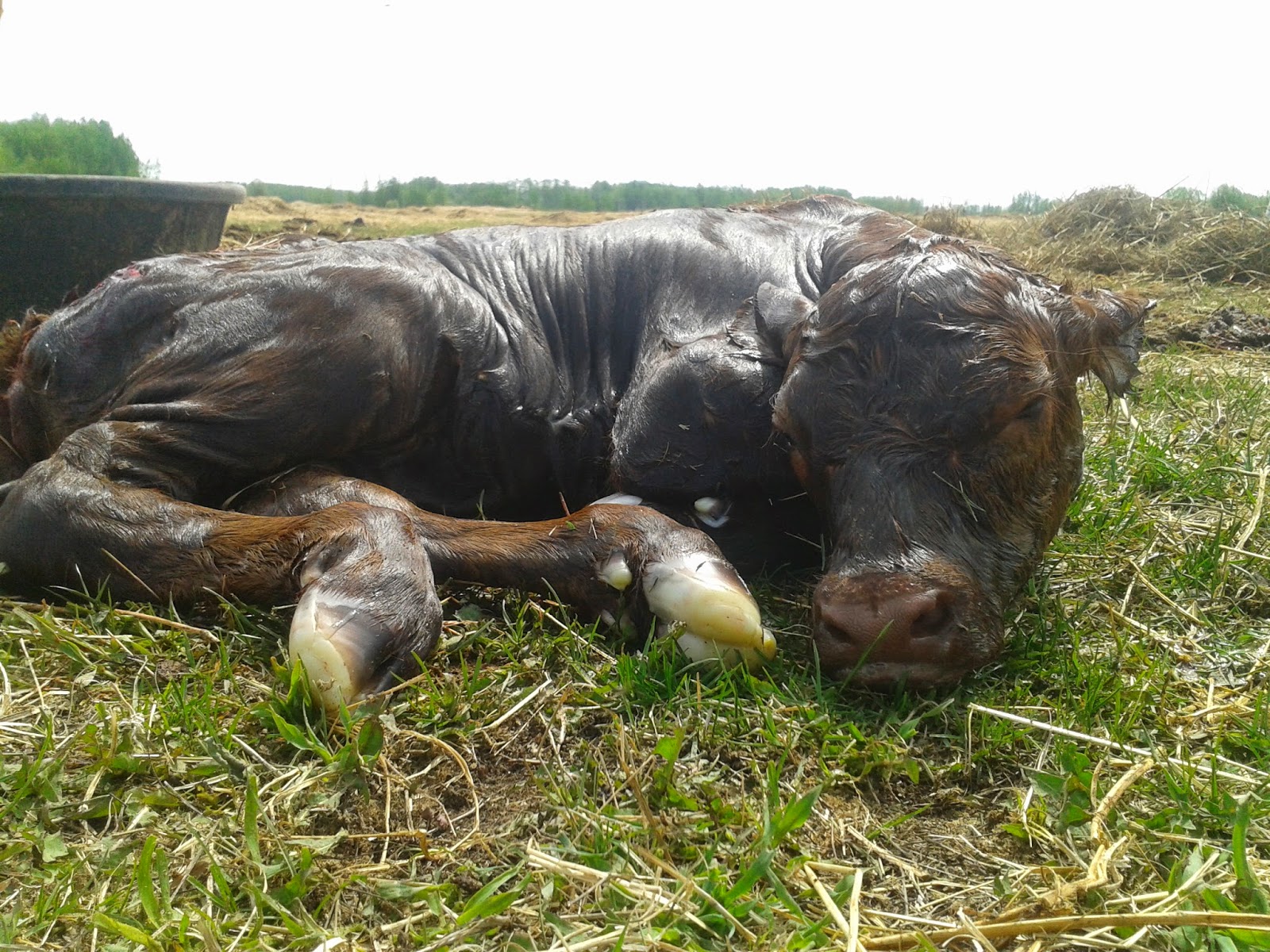 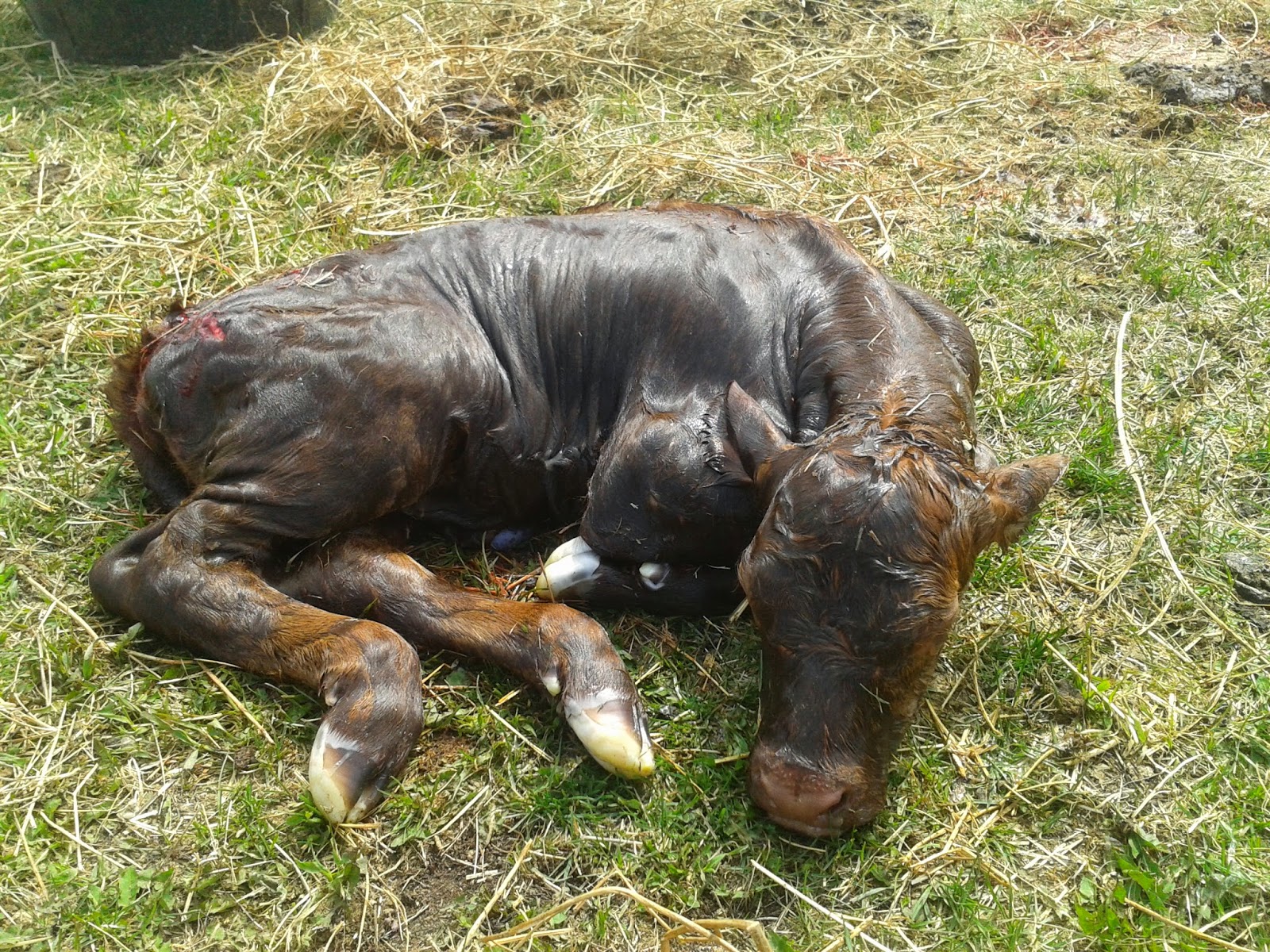 She looked a bit stunned from being ripped from the womb of her dead mother,
but we got her going, rubbed her down and  tubed her colostrum.
We watched her battle through the day with her breathing.
She could not stand yet and no sucking reflex.
By night, we wondered if she would make it.

I blanketed her and fed her late last night.
This morning she was looking brighter, her breathing calmed and with a little help
she stood up and walked a few paces.
By this afternoon she walked some more, drank from a bottle
and things  are definitely looking a lot brighter for her.

We can only do our best, and give her a chance.
This is also the only heifer calf this cow has produced for us,
so out of sentimental feelings,
we really hope she will survive and become a future cow in our herd.

The old cow did not go to waste,
she was cut up and will be fed to the dogs. 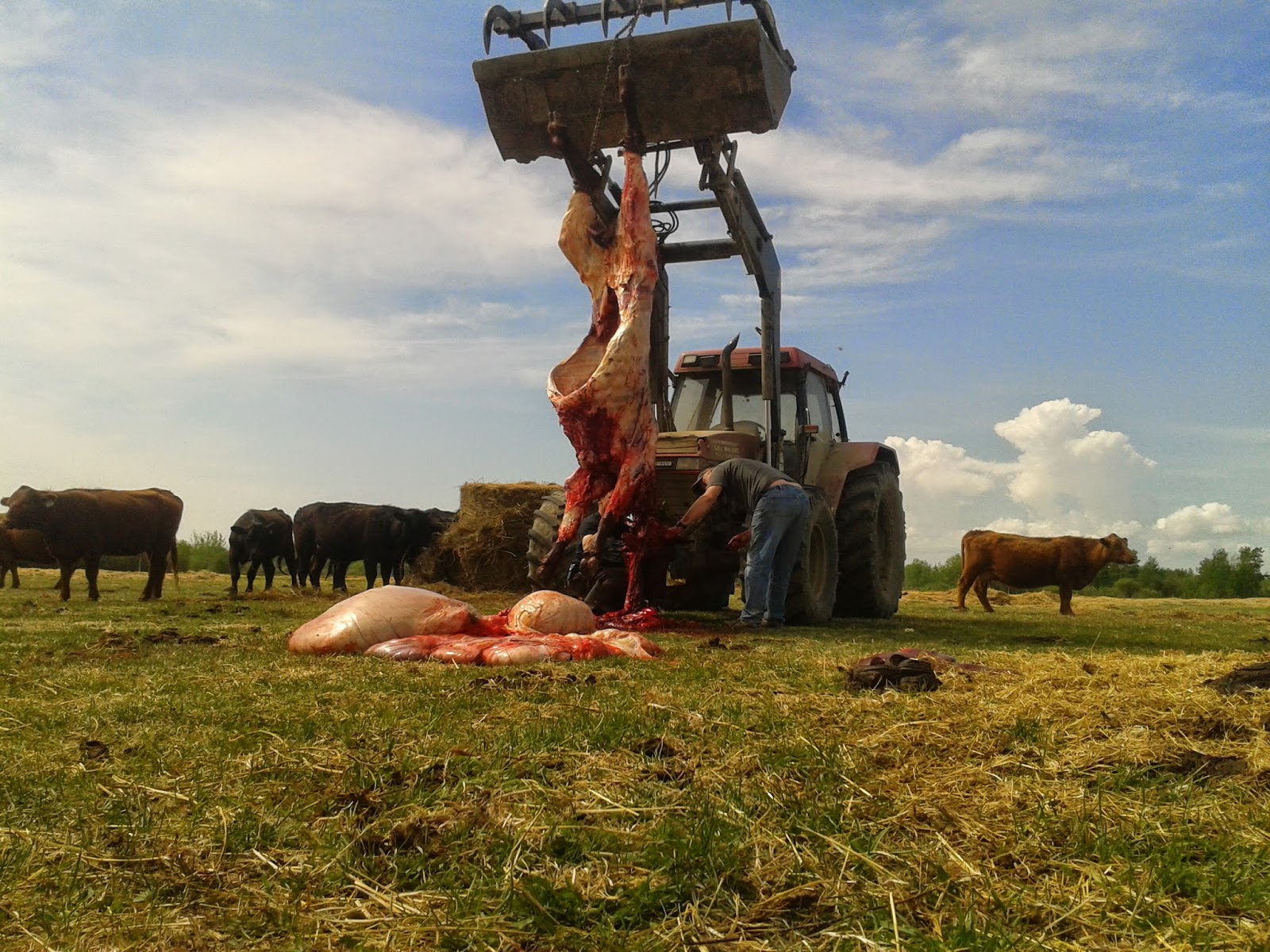 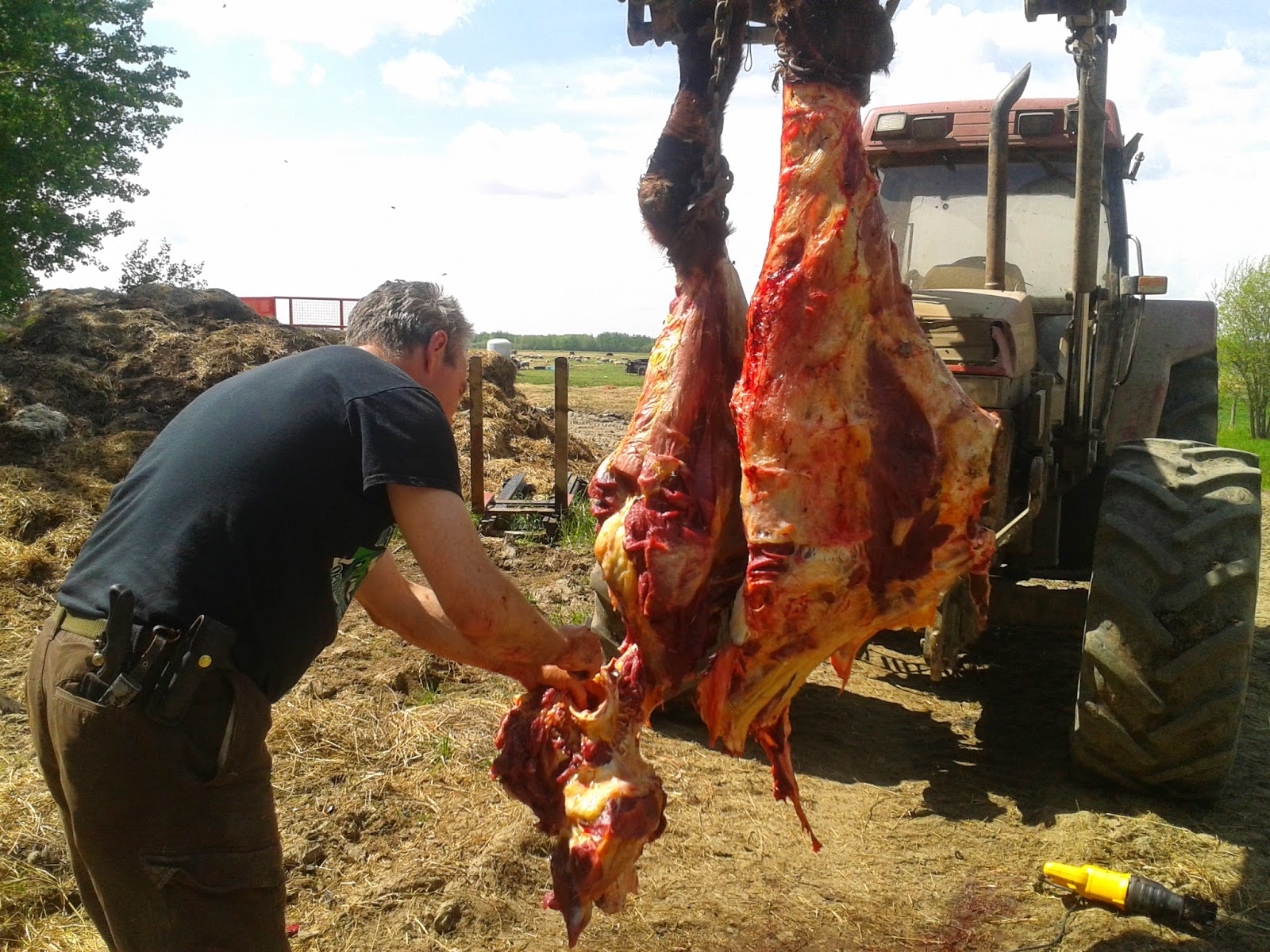 Thank you Dale for your help!
It is very much appreciated.

The other "news" from this weekend has to do with the little baby owls.
The smallest of the baby owls,
the ones I blogged about HERE,
was not doing well.
It could not fly yet and was still sitting on the road just waiting for a predator to come a long and eat it.

Our neighbor saw it and brought it to us.
We debated what to do,
and decided to give it a chance;  these hawk owls are not very common.
We will feed him and
when he is strong enough,
we will release him.

For now, we have him in a big shed, full of trees and branches.
We bring him mice, pieces of chicken guts and strips of  cow liver.
He is eating well. 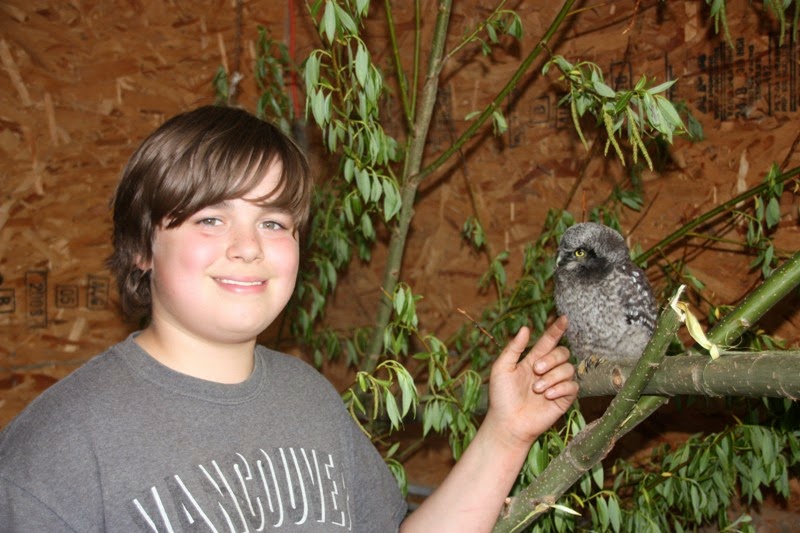 As for the bison,
he is still hanging around in the neighborhood.

The pups are huge,
growing like weeds and very active.
More about them later this week,
and of course some more photo's! 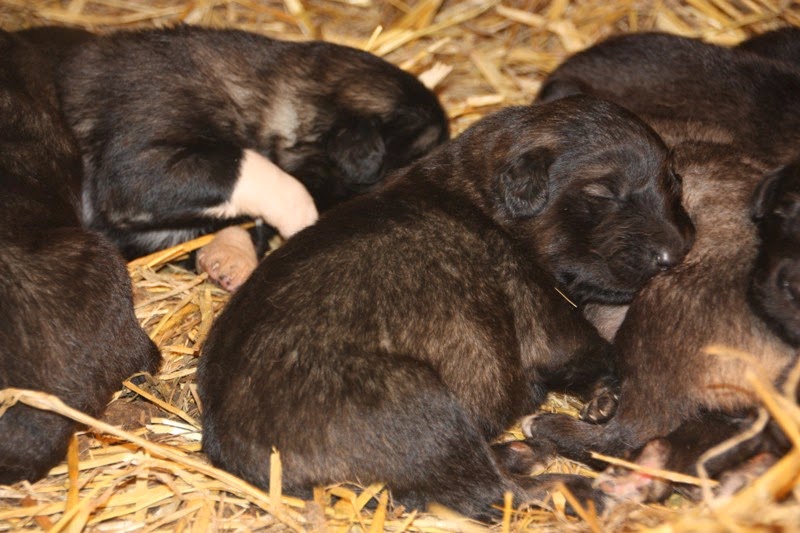 My horse is still pregnant!