Reflections on the past days

It has been a tough few days.
Let me backtrack a little.
Our ewes are grazing a pasture a few km from our ranch.
Some nights they stay out ( in electric fences) and other nights they come home.
Last week I saw a bear in the area where the ewes graze,
so decided to add Shadow into that group, to assist Lucy.
A little more dog power is never a bad idea. 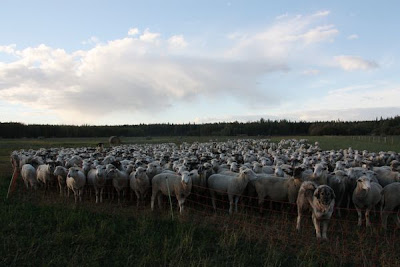 At home we have a number of sheep groups,
the rams, who have had Katcha to watch over them.
Then a few smaller bunch of training sheep and a shrimpy bunch of  cull and other thin sheep.
They are watched over by Mali.

Fena is with her pups and is out of commission as a sheep guardian dog for now.

Beli and Vuk HATE each other and cannot be close to each other.
This animosity began last summer.
It resulted in a huge fight where Beli lost one of his canine teeth.
Since, that incident,
Beli and Vuk need to be separated by at least 2 fences.
So Beli gets the odd and ends jobs.
While Vuk watched over the lambs two fences further.
(By the way,
to see who is who on our place,
you can visit our website and see all the Sarplaninac guardian dogs HERE)

As Alaska is not a reliable guardian dog she does not get sheep duty.
She normally keeps the critters away from dugout area, that is her job. 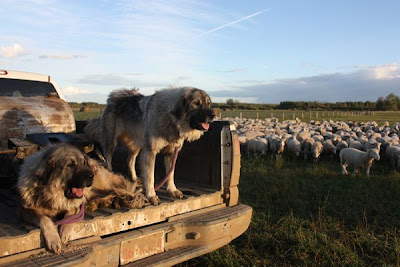 All the dogs have a job,
I did think that I might need to add another dog in with the lambs, I just did not know who and the bear close by the ewes had me thinking an extra dog with them would be a good idea.

So, a few days ago, I find a dead lamb in the pasture,
not much left of it.
I suspected that it had died of natural causes as it was a runt.
The next morning, another one,
everything but the head and the rib cage was gone.
This one, got the full inspection and I found two holes (bite marks)
on the neck.
My suspicions for the culprit was coyote.

That meant I needed to take direct and immediate action to prevent more losses.
These lambs have a pretty big pasture for themselves.
We were not night corralling them and they only had one dog in with them.
In hind sight of course, a mistake.

So, I directly  collected Lucy from the ewes to place with Vuk.
Mali moved in closer.
Katcha moved to the ewes.
Alaska and Beli get the big pasture to patrol at night,
and the lambs get penned up at night.

No kills for the last few nights.
So, I hope this will help.

This morning, I go to see the ewes and feed Katcha and Shadow.
As I get to the pasture none of the dogs come and greet me.
I call, and Shadow comes running towards us.
No Katcha.
I call and walk around the pasture.

To my dismay I see that some ewes are out of the electric nets.
They had escaped and had pushed the net down.
Why?
Had something bothered them?
Luckily, Shadow stayed with the bigger group,
however Katcha was gone.

My heart sank.
I had visions of her getting shot.
I warned the neighbours to keep a look out for her.
I drove around the fields and few gravel roads.
After about an hour I saw her.
Not very far away from the ewes.
What a relief.
With the pressure on with the coyotes,
I cannot afford to lose a fully working reliable adult dog.
It makes me realise how much we rely, depend and need the dogs. 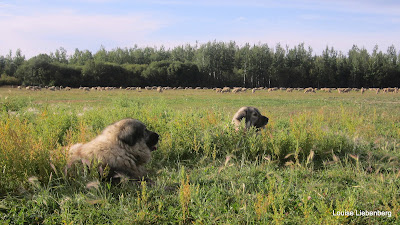 It is an illusion to think that we will never get predated on,
however, we do need to do all we possibly can to prevent predation.
We need to stay flexible, put in some more hours and pay attention to what is happening.