Busy as a bee, beaver?

It is not longer standing.

See this little guy,
he/she is the one who did this /is doing/has done this.

Why, because he is a beaver.
And, beavers fell trees,
they build dams, the modify, they construct
and generally
keep themselves busy.

I have been keeping tabs on this fellow for a while.
Most of the time he does not mind me watching him,
other times he gets a little pissy about this,
and will smack his tail hard on the water,
to intimidate me.

I am not very intimidated, usually just a little wet.

Beavers are second only to humans in their ability to manipulate and change their environment.

Prior to European immigration there were over 60 million beavers in North American.
Due primarily to over trapping, beavers were almost wiped out in early part of the 20thCentury.

Anyway, I think they are facinating critters  and I wanted to share this little insight
of life on the beaver pond.. 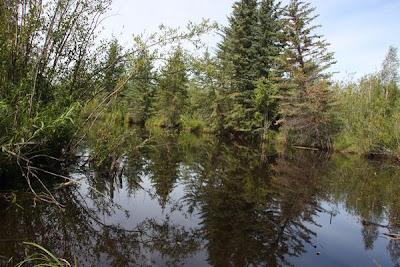 Have a good Friday the 13th!
Posted by Louise Liebenberg