Jess is doing a 4H steer project again this year.
Her selection﻿ method is as follows:
we gather all the steer calves in a pen.
She looks over the group.
She walks through them, studies each one.
Makes a short list and selects those out.
She then looks upon them again, makes them walk around and then makes a final two selection.
When it is down to these two, the deciding factor is...
not soundness,
not beefiness,
structural conformation,
nor is it wean weight.
Nope, her choice is decided by
"who is the cutest?"
She maintains that it works for her!!

So, this year her calf is a little itty bitty  red Angus calf,
who had everything going against him as he was a twin to start with,
from a mother is 15 years old!
He was the lightest calf  at weigh day.

So, she has been feeding him and he really has done well growing over 3.5 pounds a day.
Now, this weekend was the Peace Country Beef Congress in High Prairie,
so, Jess decided that she wanted to show her calf in the 4H class. 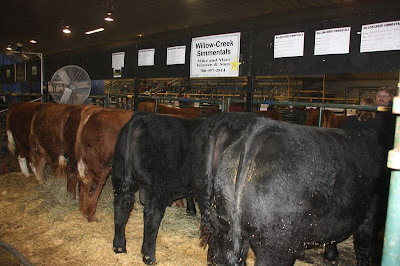 So, the preparations started with teaching little "Red Bull" to lead.
Then hauling him into the wash bays to give him a bath.
He went from this: 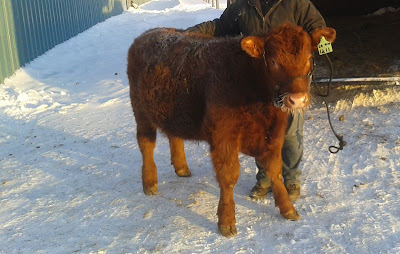 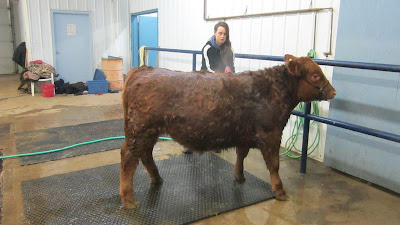 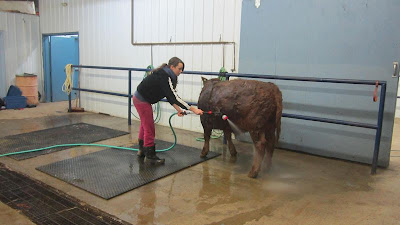 and ended up like this..
all clipped,  trimmed, washed and blanketed. 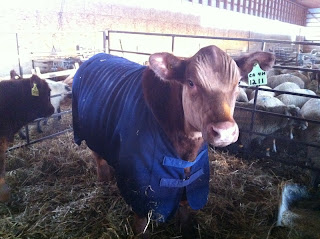 Show day rolls around, and the finishing touches are done ( about 3 hours work..)
Here Jess is making sure his show halter fits correctly. 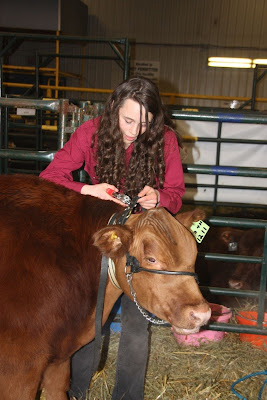 Then the final trimming and combing.
Luckily, Jess got some professional help from Tommy.
He is a professional cattle fitter.
He showed her how to make her steer's butt look bigger, his back broader,
straight top line and how to make the ribs look more well sprang...
He quizzed Jess on her feeding, growth rate, breed etc.. 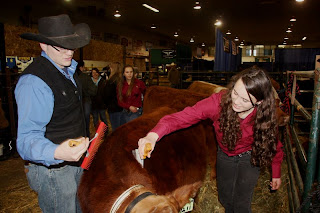 And, then its show time.. 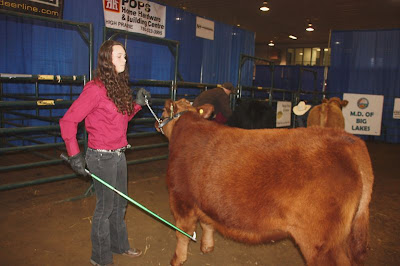 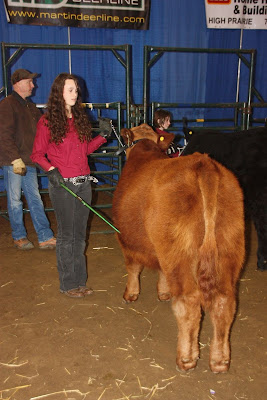 The judge liked her steer however;
he could have been a bit bigger, taller, have better feet etc..
He did not even  comment on how "cute" he was!
Jess placed in the middle of the group, which was not too bad considering...

At the Beef Congress the 4H kids also had a cattle judging clinic and after that a judging competition.
Here they had to judge a group of bulls and then a group of heifers.
After they had placed each animal, they had to orally defend their placement of each animal to the judge. 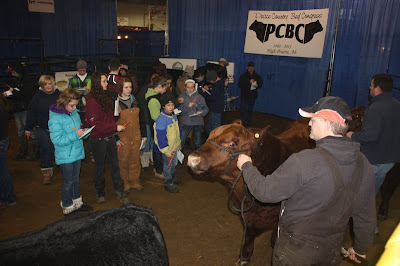 Jess paid attention and placed second in the Judging Competition. 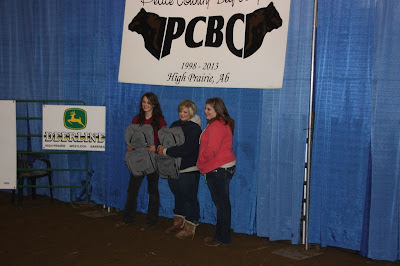 The Grand Champion, from the whole Beef Congress  was this yearling Black Angus Bull. 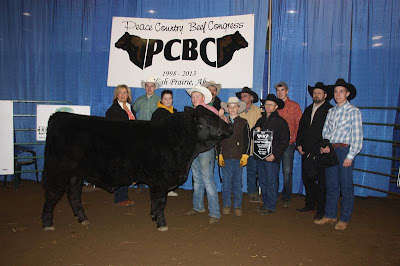 The weekend was busy,
it was great to meet new people,
hook up with some old friends,
socialise
and eat a great steak.
At home lambing continues ( Eric and I drove up and down to check..),﻿ night duty continues, chores are an everyday reoccurring activity so, it was great to have a little break from all of this and go and look at some cattle all weekend.
Posted by Louise Liebenberg