How stuck can one get?

When Eric saw his tractor, all he said was:
"It is not stuck, you buried the tractor" 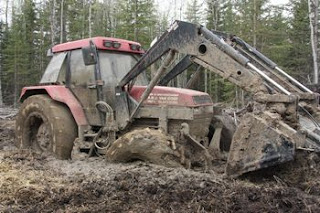 In all honesty, I did know that there was a deep mud hole somewhere here,
however in my defence their was a huge round bale in the front of the grapple and I really could not see where I was going until I drove into the hole
and then had a "Ahh" moment.
Actually it was more like a "sh*t" moment.

So, after dumping the bale of hay,
I tried for a while to drive out of the hole.
I tried to scoop mud with the bucket and push with the bucket.
I finally came to the sobering conclusion that the tractor was really, totally and utterly stuck!
So, I started to walk back home to inform Eric that the tractor was axel deep in the mud in the cow pasture.

It was a long walk home.

I could his voice in my head:
"how can you get the tractor stuk...
who drives into a hole..
why did you not look.."

When he saw this all he said was:
"It is not stuck, you buried the tractor"

So, Eric, being a male, he *had* to try to drive it out for himself.
He tried forwards, backwards, scooping mud and pushing with the bucket,
nothing worked.
That voice in my head said "told you so"Been there and did that!

So, out came our other tractor to pull this one out, that also did not work.
This is now turning into a major effort!

We eventually admitted defeat, and called a far neighbour to help us out.
He came a couple of hours later with his skidder to help pull the tractor out..
See, how the cows watch how this tragedy/comedy unfolds before there eyes!
This is like a dinner and entertainment deal for them. 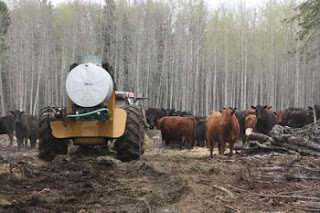 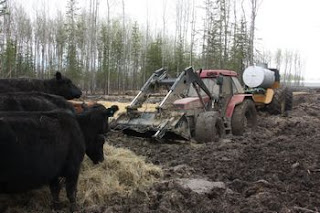 So, with plenty of horse power,
our tractor was finally freed from its muddy grave. 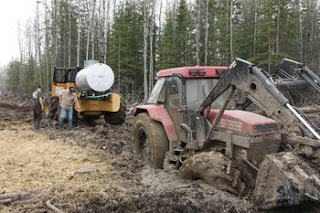 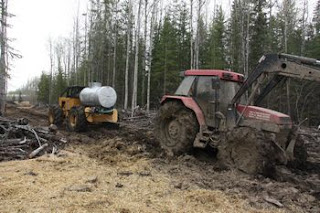 And, I could carry on with the feeding..
Posted by Louise Liebenberg