This post has been on the back burner due to our devastating barn fire we had. 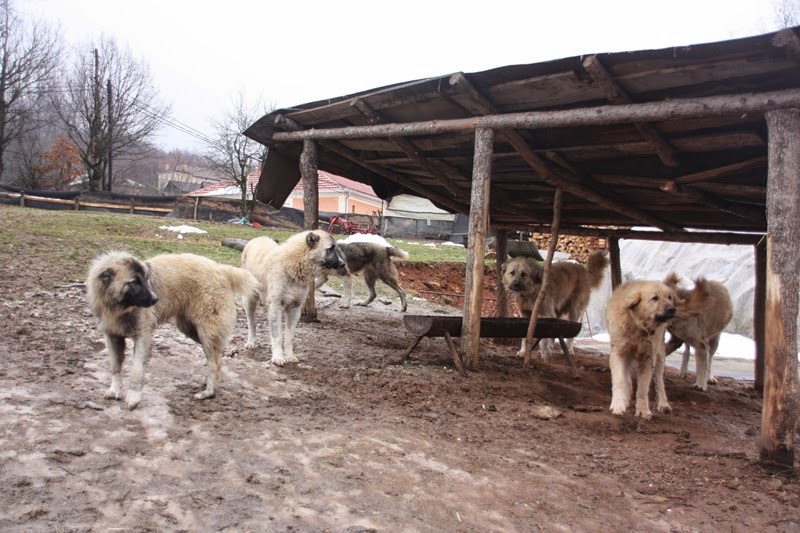 Understandably, this is and can be a "hot" topic.
Everyone interprets a breed standard or a breed description in a subjective way.
The fact, that breed descriptions are subjective,
leaves room for various interpretations,
which in turn,
results in variations, breeding preferences and even trends/fashions among dog breeders.

Breeds and the subsequent breed registrations, are a relatively "new concept",
although many of the sheep dog breeds have existed for thousands of years in a certain region without having the need for a registry or even a "breed name".

With breed registries and organization arising,
breeds got assigned to groups.
The groups are not always accurate in their reflection of where a certain breed belongs.

The sheepdogs got divided into various groups,
and designated to a certain region of origin,
which changes when the world map changes. 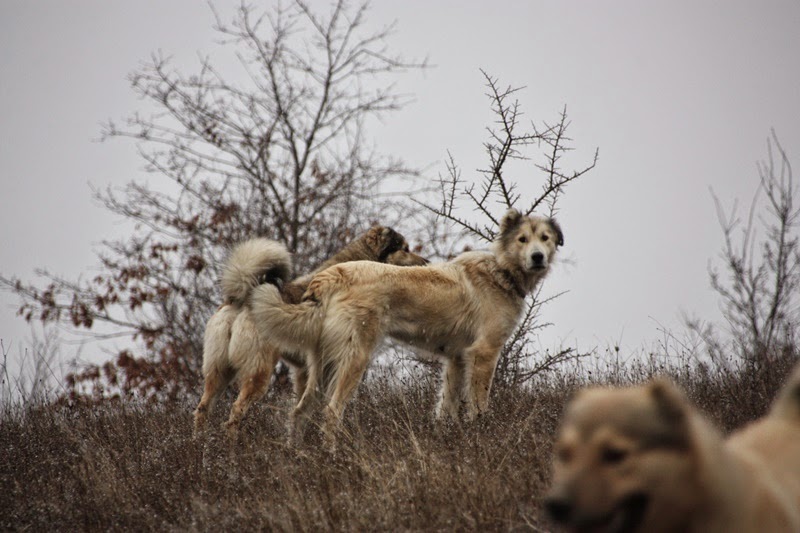 It was during the Elizabethan Era,  that the creation of breeds, a breed standard, a kennel club and registration was started.
Prior to this, people did have hunting dogs, and terriers, and sheepdogs.

Defining a breed, within a standard, comes with limitations,
and is,
by the very nature of defining it,
exclusive in many ways.
Breed standards have always been more focused on how the dogs looks,
rather than how the dog does its job. 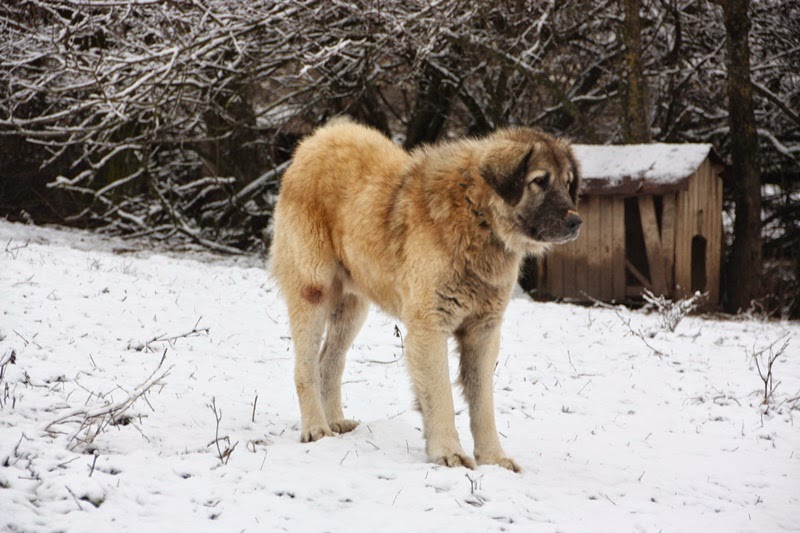 As soon as breed is defined by looks, many traits, types and variations
become excluded from the "Standard".
A perfectly good working dog, has perhaps the "wrong" color or too much white,
these dogs  become excluded from  this breed standard,
leading, down the road,
to a narrowing of the gene pool and a loss of diversity.

Rarely, is a breed standard or registry focused solely on the working ability of the dog.
Perhaps, the International Sheep Dog Society maybe one of the few registries in the world, that highlights working ability above that of coat color, or the coat length.

More often than not,
the defining of a national breed,
is more,
about politics,
than it is about the dog.
Assigning breeds to a region, within borders ( that are ever changing),
is more a political choice,  than a cynological decision.

Understanding,  what the Breed Standard says about the breed,
may in fact,
not always be the reality among the shepherds and their dogs,
where "looks" is not the criteria used for selection,
rather,
the ability to do its guardian dog job.

The Shepherds do not necessarily call their dog a Sharplaninatz, or an Anatolian,
they may simply refer to it as a sheep dog.
A generic "sheepdog" found throughout the region,
and certainly not separated by land borders or,
dog fancier's decisions.

Many shepherds we met in Macedonia,  will not even use the word Sharplaninec,
as they feel it does not accurately describe their dogs.
The shepherds we spoke to;
dismissed the breed "sharplaninec",
as they felt is was a creation made for the show ring.
Not only that, they felt that the name choice was a political decision,


Seeing all the different dogs, that we saw in Macedonia,
one could clearly see,
a large variation of "type".
Types we may label as  Kangal Types, or Carpathian types, or maybe even a  Bucovina,
we certainly also saw,  some Sharplaninec types. 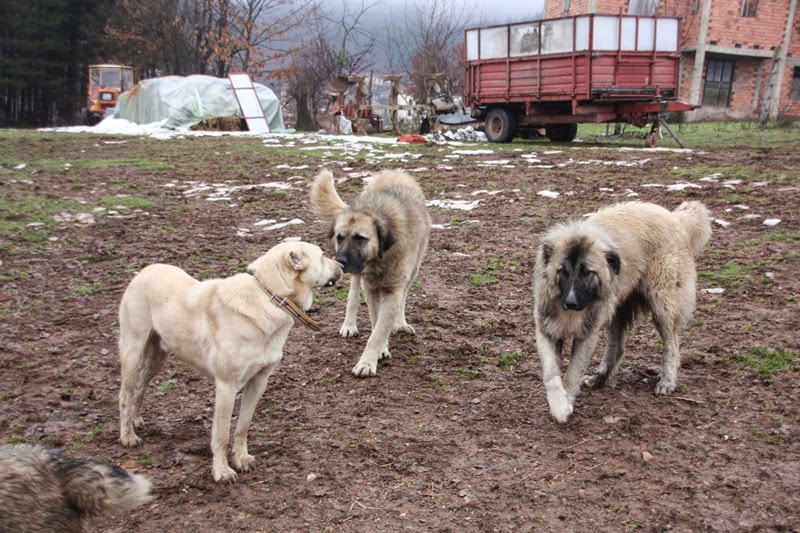 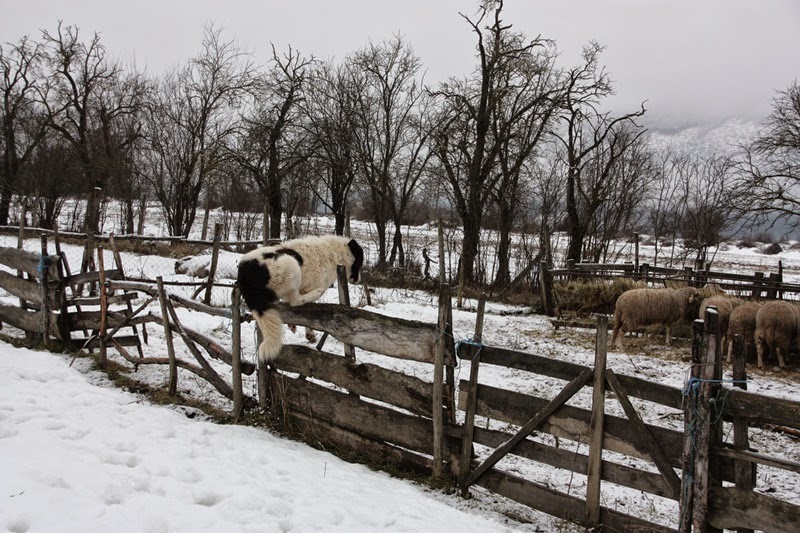 All these dogs gave us visual cues as to how to name the breed,
but, possibly by "naming them",
we by-pass the fact that all these dogs are "sheepdogs",
and,
all these types did occur historically in this region. 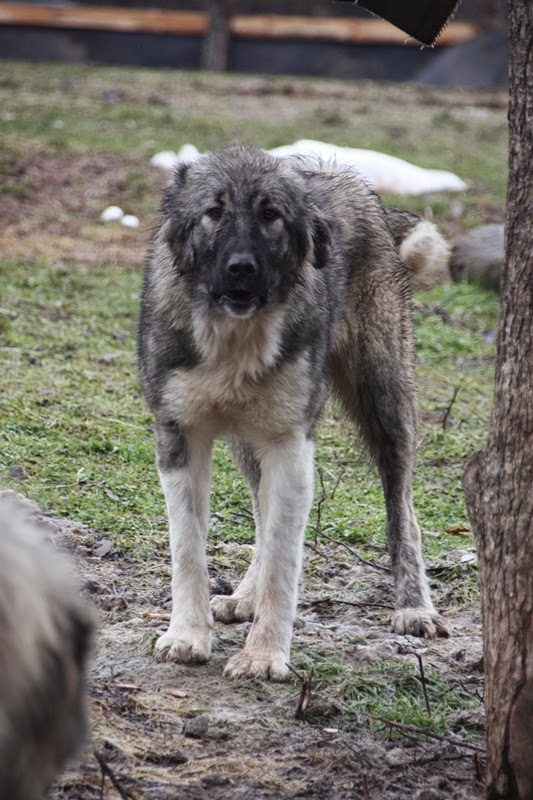 Understanding, a little of the history of this region may highlight the fact that the shepherds dogs are  all part of a greater group,
rather than, small pockets of individual breeds.

Macedonia has always been an intersection of major trade routes,
historically if you follow the grazing routes and trade routes,
one can see how these movements may impact the breeding of dogs.
Land borders are ever changing. countries are occupied and the influences from these occupations, are still found in the cultures of these countries today.
[http://www.cdagro.com/history/macedonia.html]

Macedonia was once occupied by the Turks during the Ottoman Empire.
In Macedonia, you get to drink Turkish coffee.
The Turkish influence is still a part of the daily culture.
According to one of our friends,
it was during this time, that Macedonia had a  vast sheep breeding program.
The sheep, would be moved from Macedonia into Anatolia, Turkey,
to graze on the plains and steppes.
These sheep, fed the Turkish Empire.

It is logical to conclude that the Turkish sheep herders bred their dogs, to the dogs from the Macedonian shepherds who moved with the sheep, into Turkey.

Bulgaria borders Macedonia, it is similarly logical that dogs found in Bulgaria,
could also easily intermingle and breed with the dogs who came up from Turkey.


Albania borders Macedonia, we heard stories of shepherds crawling under the barbed wire fence on the border to breed their dogs,
to dogs found on the Albanian side of the border.

The whole idea that shepherd's dogs are totally isolated and only found in one cut off region,
is perhaps, a misconception.
The  shepherds' dog are a generic "breed" of sheepdog,
not isolated, from influences from other countries and breeds.
A sheepdog which is now often referred to as the Aboriginal Sheepdog,
one that encompasses all the diversity, that is often lost in the "breeds".

So, you will see some dogs that look like Kangals, or Carpathians, Karachachans,  and even Sarplaninac looking dogs.

Many of the dogs  did have a known lineage,
just not one, registered with the FCI.
The shepherds and breeders of these dogs would be the record keepers of their own dogs.

Three generations of shepherds, and their dogs: 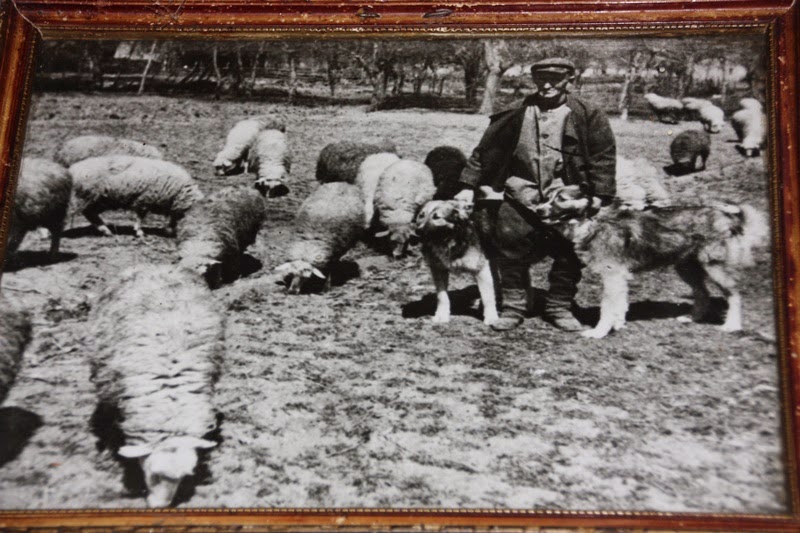 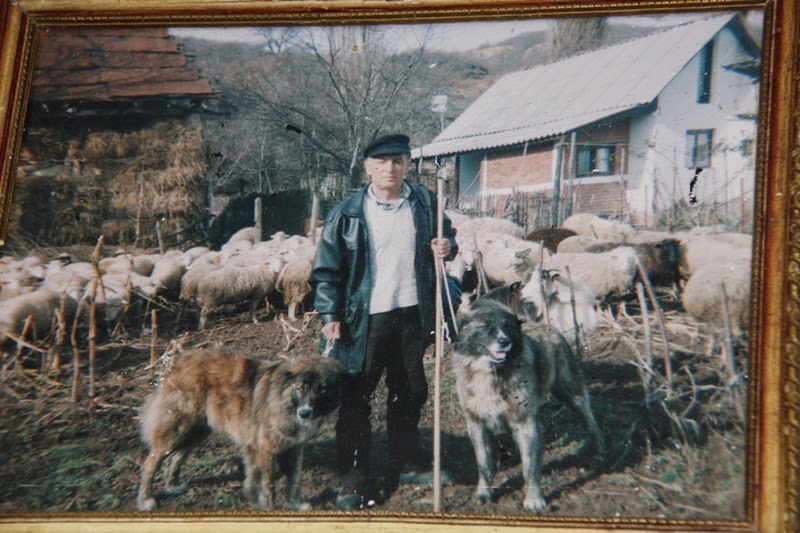 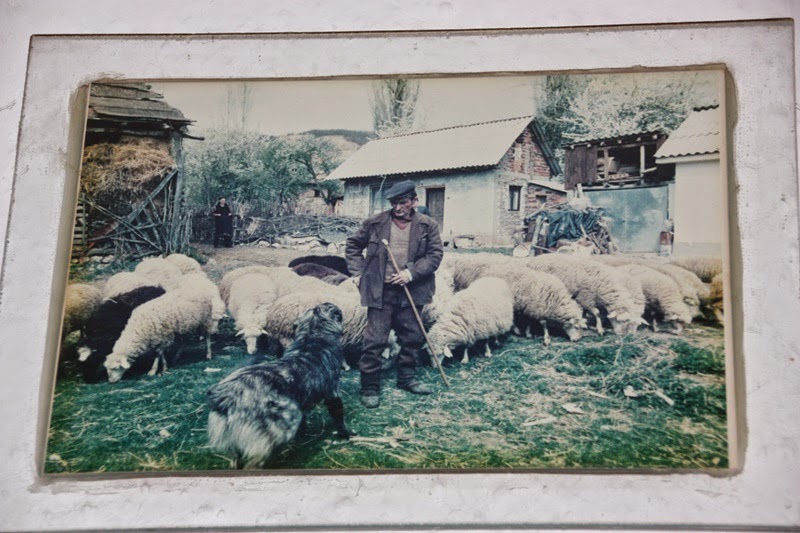 The hardest part is perhaps understanding that,
a lot of cross breeding has taken place and that even the "pure, aboriginal" sheep dogs,
may be a rarity today.
We visited with a few different people who felt the need to protect this "aboriginal sheep" dog.

Of course, we also saw mutts,
dogs were crossbred with anything and everything.

Some crossbreeding has taken place primarily, for dog fighting reasons.
All over, you can find mixes with; Caucasian Ovcharka, Central Asian, and other types of breeds.
These were not the dogs we were interested in seeing.


There is a move among certain people to try and preserve the aboriginal dogs,
in all its forms and variations.
I did not clearly understand, all the reasons why the "aboriginal sheepdogs" needed preserving.
I have always thought,
as long as their are sheep who need protecting from predators,
there would be a need for working dogs.

The idea of preserving the aboriginal dog, is fantastic,
but once again, opinions differ, people have  different ideas how to preserve this "generic sheepdog"
and it is hard to get consensus and move in a certain direction with a club or group. 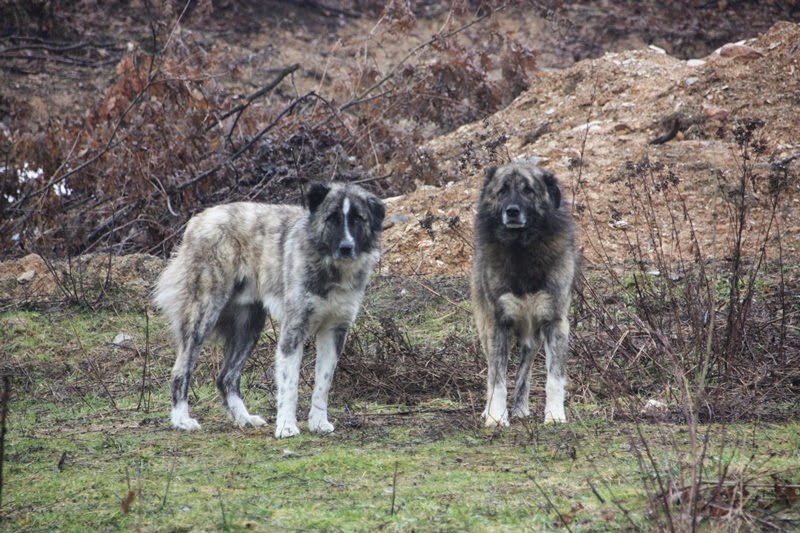 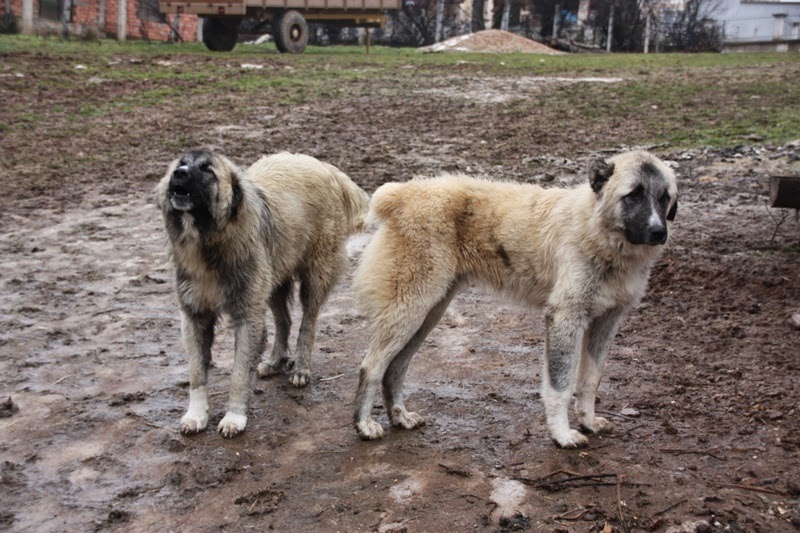 What I wonder,
is the "aboriginal sheepdog"
perhaps in the baby stages of becoming a "breed"?
Seeing the efforts to preserve it, the formation of a "club",
meetings and declarations.

Is this perhaps not the same as how so many other breeds developed?

Many of the aboriginal working dogs we saw, could easily fit into a breed standard for a Sharplaninec,  Kangal, or Karackachan.

What we did notice on our travels,
was that some people where assigning,
certain pheno-typical traits,
as being signs of antiquity.
Signs like double hind dew claws,
or a lupine shaped head and eyes.


Now, I am an idealist,
I believe that breeds evolve due to selection.
Selection for certain traits.
I  think that it is human nature, to make selections. 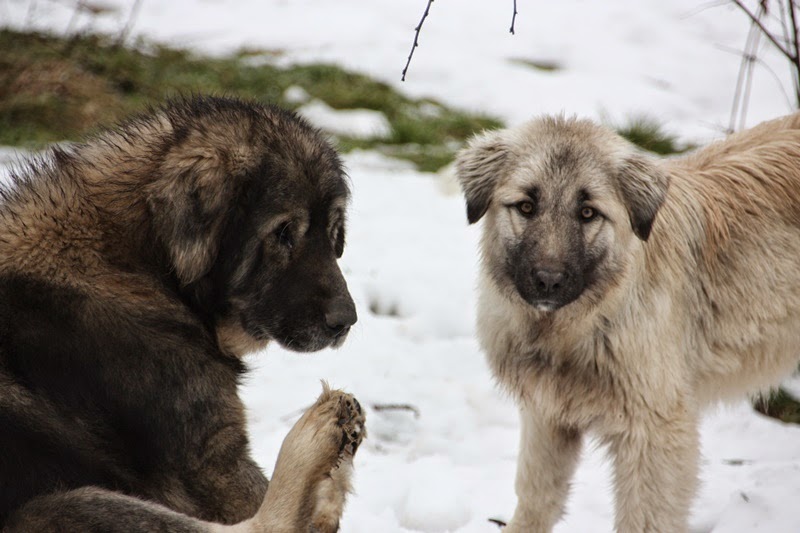 If one does these selections over many generations, I believe  that is when you get a "breed",
who share similar working abilities and outward features.
You get predictability in outcome, both physically and in working ability.

I believe it is possible to breed for and select for a dog with a certain outward appearance AND have a good working ability.
Provided that, the looks do not become the primary selection.

Form must, in my opinion, follow functionality.
Working ability must trump all  "other" miscellaneous selections.

I am a purist and I believe in "Breeds".
I like the predictability.
Not everything in a breed standard may be correct,
but, I do believe  that as a breeder it is important to select for the traits you find important.
I am not overly concerned with things like white markings, or exact length of coat.
What I do care about is quality of coat, the  functional size, the well proportioned body, correct angulation etc
What I care most for is working ability and the selection of these traits.

You have good breeders of purebred and registered dogs, and you have bad ones,
the same applies to aboriginal sheep dogs.

So, here are some more examples, of sheepdogs we saw in Macedonia:
All selected for working ability,
all being functional in build,
all have a strong and healthy constitution.
Many of these dogs, could easily fit the breed standard for various sheepdog breeds. 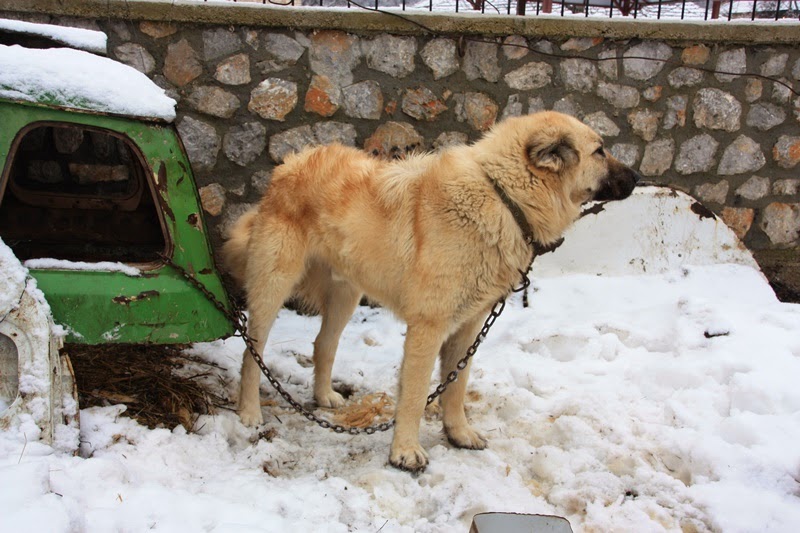 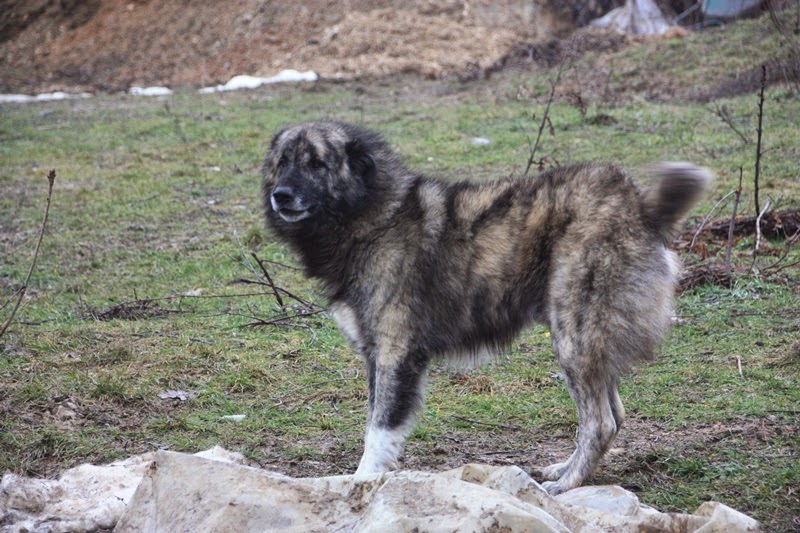 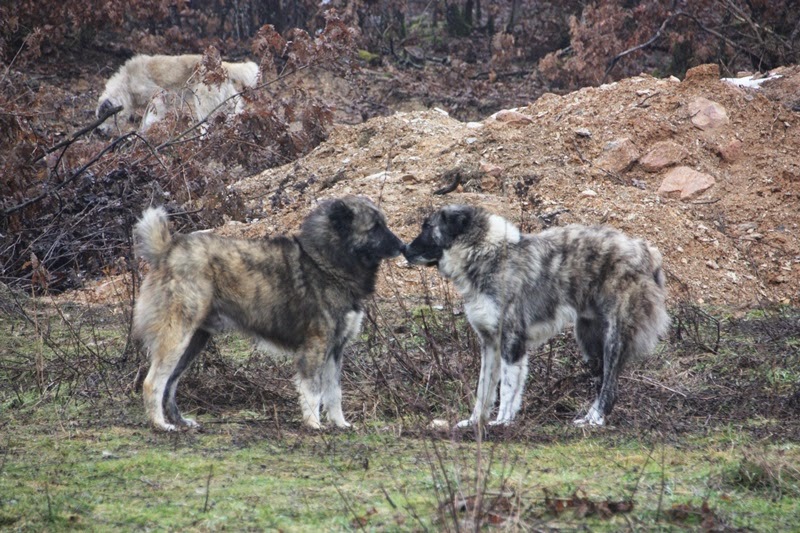 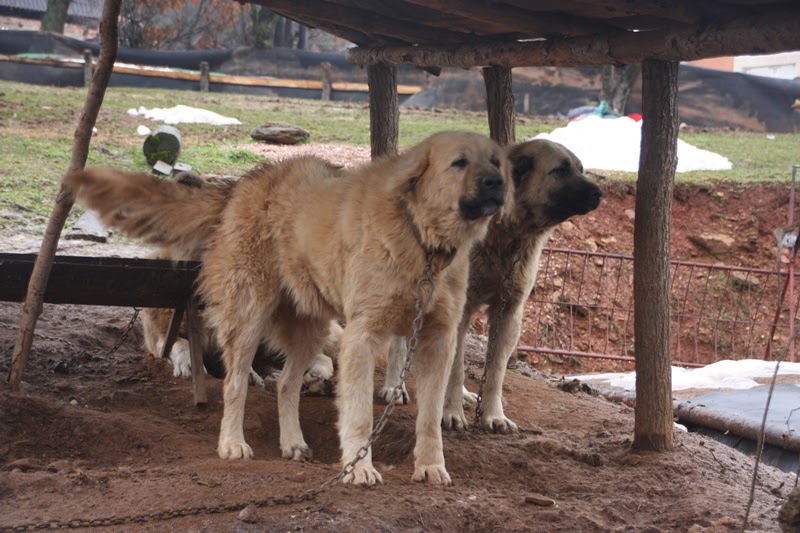 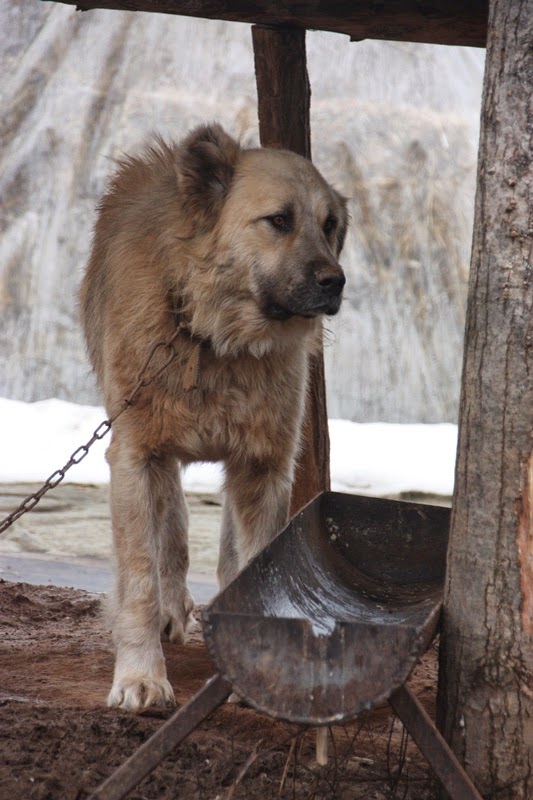