Today, is my birthday,
and usually, once a year I, take this moment to reflect on my life, through my blog.
Today is the day.

So, while driving home from Calgary,
I was thinking about what I should blog about..
Do I share my deepest darkest thoughts?
Or, share all the funny moments in my life with sheep and dogs?
Do I make a list again?

Instead, I decided to share some significant dogs through my life.

So, let me jump right in.
My earliest "own" dog memories I have, start with a little fox terrier called Scamp.
My family loved dogs, but not to the extent that I loved dogs,
Scamp was the family/yard dog, always around, never trained, at times a pain,
he was the  dog that just was there.
Now, Scamp  had a dirty little secret,
and one day, I happened in on Scamp's actions.
I was perplexed..
you see,
Scamp liked to hump his blanket.
My innocent young mind did not know about the birds and the bees,
so I would watch him in total awe,
humping away at his blanket.
Somewhere, in the depths of my mind I just knew it was
something, I should not be watching,
it was illicit, dirty and yet oh, so fascinating..

The next significant dog was a little cross bred Schiperkke called Suzy.
Suzy Wong, to be completely accurate.
She was the sweetness self.
She was small, black  and  nondescript.
I do remember making this poor thing,
hop over broomsticks balanced on bricks, in attempt of doing agility.
Suzy was another "family" dog and  certainly not "my" dog,
she was in the same league as Scamp, just sweeter.
My sister always claimed Scamp as hers,
and by default Suzy would then be mine.
However, I hankered for MY very own dog.
I wanted a "real" dog.
I wanted Rin Tin Tin, Old Yeller, Jock of the Bushveld.
I wanted a large, loyal, noble  and trainable dog.
I aspired to the top dog, of all dogs.
I wanted my very own majestic
German Shepherd Dog.

I begged and pleaded.
I promised to do whatever was needed, as long as I got my very own GSD.
For my 14 th birthday, my dreams and wishes came true.
My parents agreed to get me a GSD pup.
I was over the moon.
My parents laid down the law:
it had to be a female,
get spayed,
be trained,
walked,
and, I had to clean up after the dog.
I was more than willing to do all of the above,  as long as I had MY dog.

We paid a small fortune for this dog,
125 South African Rand.
Our first ever, registered and pedigreed dog in our family,
and she was all mine!!

Enter: Cleaopatra.
Drum roll....
She was in my eyes, a queen,
I worshiped the ground she walked on.

I started dog training with her.
I did everything I could with her; obedience, companion dog, tracking, agility and manwork.
I trained at the Pietermaritzburg Dog Training club and had a fantastic mentor who took me under her wing.
Grace Robinson, taught me all about obedience training dogs.


It was also at this time, that my first significant boyfriend entered my life, Paul.
We were passionate alright,
passionate about dogs.
We would meet at dog training, take our dogs for walks in the afternoon after school.
This was all facilitated by our friend, Derrick, who would drive to collect us kids, and our dogs
and take us for long walks in the woods.
He watched over us, guided us and taught us a few tricks.
Derrick bred and showed Rhodesian Ridgebacks,
Paul had a deaf Dalmation and a Ridgeback,
and, I had Cleo.

The three of us would travel around large parts of South Africa showing and competing with our dogs.
We had a blast.

Now, my GSD,
although, an awesome dog,
was not always as willing to compete, as I desired.

So, I had started badgering my parents for another dog.
I had noticed how smart, fast, agile and clever the border collies were.

My neighbor boy up the road, Garth
had a wickedly smart border collie male called Tip.
I massaged and manipulated my parents to eventually allow me to get another pup,
I only wanted a pup from Tip.
He went on to breed a female and I got pick of the litter.
Enter Ace..

Ace, was the next and probably THE most significant dog in my life.
It was through Ace, that I eventually become involved with;
sheep and
shepherding,
farming,
met Eric,
stayed in the Netherlands,
had kids
and finally, moved to Canada.

Ace, was the one in a million dog, I think he was my first "soul-mate" regarding dogs.
He was a clown,
and, always in for everything.
We did obedience, showed, did agility, man-work, companion dog, tracking, search and rescue and of course sheep herding.

I learned to train Ace for sheep work, from a book.
Until, my next major mentor stepped into my life.
Jill Rankin,
took me in, and taught me everything about sheep and sheepdogs,
that one could not learn from a book!

It was with Ace that I, once upon a time,
won best lady handler in the South African National Sheepdog Trials.

Ace was there, when Paul and I decided to move on.
he was there from start to finish with  a few other significant males in life.
He was my rock, through my formative dating years.

Ace sat in my University classes with me,
and finally joined me on my travels to Europe.
He was there, when I met Eric.

However, it was Rhaq, that sealed the deal.
Eric gifted me this  black border collie pup, whom I named Rhaq.
I think it was a well thought out strategy on Eric's part.

Rhaq taught me what a good dog was.
He had everything (except for good hips) that you wanted in a sheepdog;
guts, power, balance, style, method and brains.
He still ranks as one of my best collies, ever. 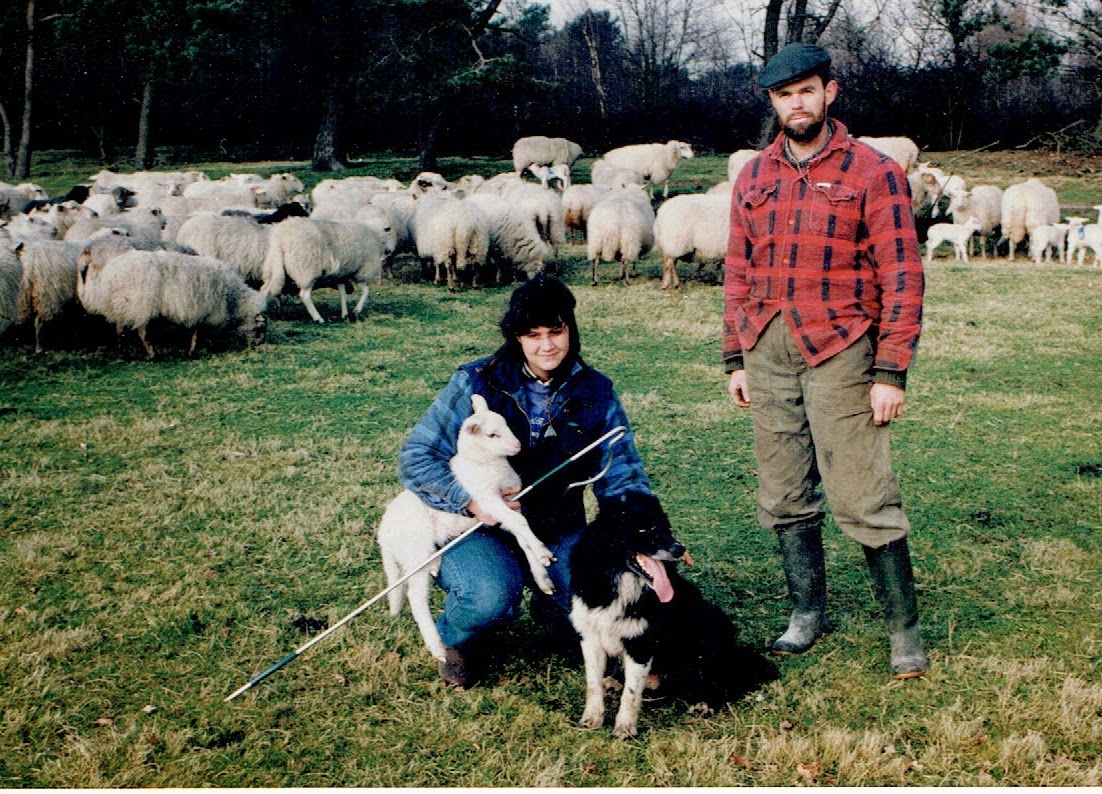 After Rhaq, I had a whole bunch of other collies, who all stand out for one reason or another,
good dogs who furthered my education in the world of working sheepdogs.
Although wonderful dogs, they do not make my "significant dogs" cut.

My next Significant Collie was a little bitch I bred, called Djan.
Djan was one of those dogs you wish you could clone.
She was smart, talented and she elevated my training.
She took me to the Continental Sheepdog Championships, twice
Where both times I placed 4th,
The first time Djan was just 18 months old, did not have a look back, once I realised we had made the finals, I raced home to train a look back on her.
We ended up 4th in Europe.
She won the Dutch Practical Sheepdog Championships.
and a few other trials.

She was all work and no play.
Her life was cut short after been hit by a car.
I was devastated.

Flash, was the next Significant Collie.
She is the dog that built my breeding line.
She was rough, ready and hard working.
Not the easiest dog, but she could move stock.
Which with shepherding hundred of sheep on dykes and roadsides,
she was the powerhouse needed for the job.
Flash is still alive today, living a life of luxury with Siny.
She is 16 now, and we when we moved to Canada,
we decided to leave her in good hands in the Netherlands.
We thought moving an older dog to a Canadian Winter would be too hard on the dog.
Flash, ranks as one of my all time favorites and to this day I miss her ability to move animals.
I still have progeny from her.

Moving on,
Ace, Rhaq, Sally, Djan, Bob, Drift and Flash were some of my shepherding dogs.
We shepherded sheep in nature reserves, parks, roadsides and military areas.
It was in this time that my next "significant dog" entered my life.

With all the shepherding we did, I encountered many situations that put me, and the sheep, in some scary situations.
It was time for a Livestock Guardian Dog.
We did our research and decided on a Sarplaninac.
Marjolein, helped as get into contact with  people who needed to rehome some of their Shar dogs due to health concerns.

Chantal came to live with us in 1992
Chantal was a natural.
She saved my butt a number of times.
I have blogged about her here:
http://predator-friendly-ranching.blogspot.ca/2013/03/shepherding-and-chantal.html

Chantal ruined all other LGD breeds for us.
She was so good, so talented, so natural.
After she got old we tried a few other LGD such as the maremma and CAS,
however, my heart lay with the Sarplanianc.

Chantal layed the foundation for the dogs we have today.
Dogs like Fena, Katcha, Mali and Lucy.
Hard working, solid temperaments, loyal and faithful dogs.

Enter, Vuk.
Vuk, is one of those dog who is difficult to attach to,
but you cannot help but respect him.
He is on my significant dog list due to the lessons I have learnt from him,
the impact he will have and does have on our breeding program
and his work ethic.

And, the final  'significant dog' on my birthday list is of course Lad.
Lad is my soul mate.

I have heard it said that every person should be blessed by having one good dog,
and one one good horse in their life.

I must be very blessed, as I have had some fantastic dogs and some excellent horses
in my life,
and, some interesting men...

I sure, hope I will have a few more,
significant dogs.