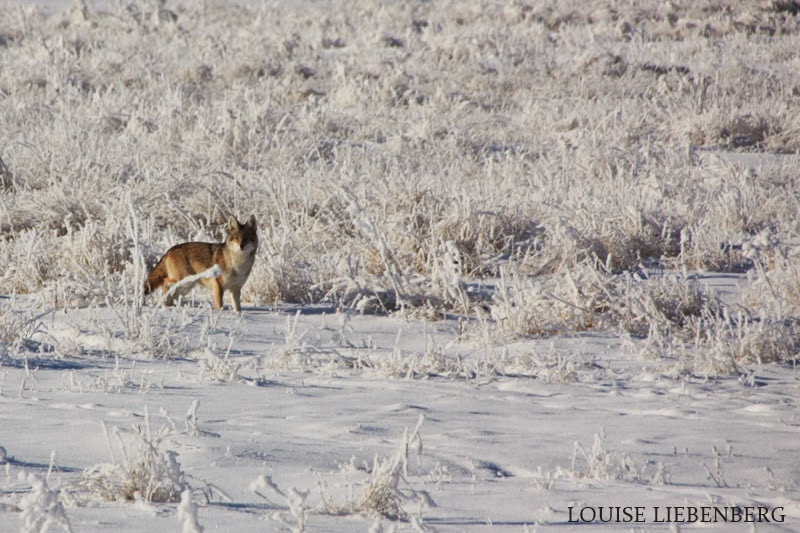 "I love coyotes" said no sheep farmer ever...
except, maybe  me.
I actually do.
I know they are smart and adaptable,
wily,
and crafty. 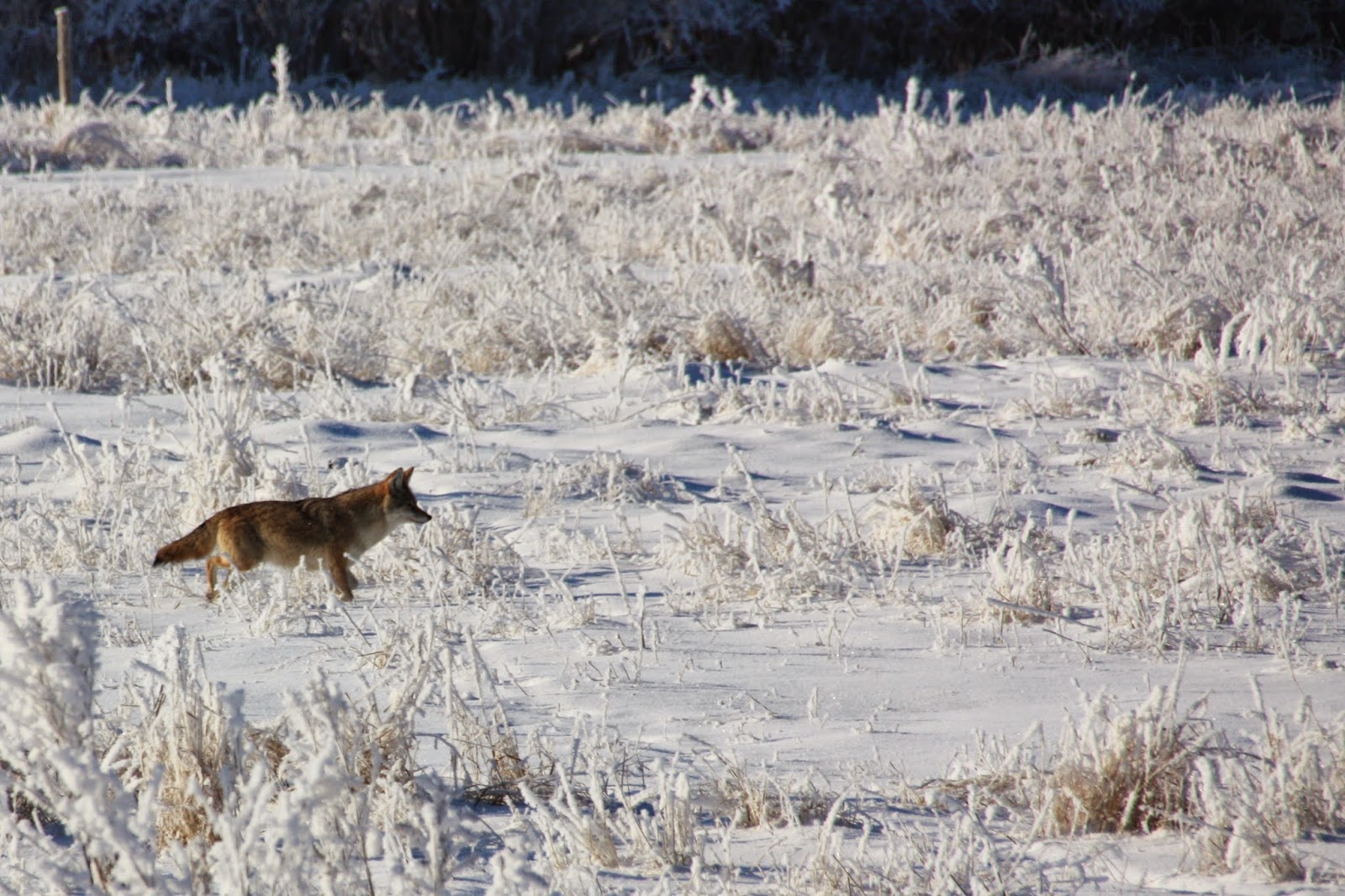 In Native American folklore the coyote is seen as the Creator,
the European's vilified him.

“Coyote, who is the creator of all of us, was sitting on his cloud the day after he created Indians. Now, he liked the Indians, liked what they were doing. This is good, he kept saying to himself. But he was bored. He thought and thought about what he should make next in the world. But he couldn't think of anything so he decided to clip his toenails. ... He looked around and around his cloud for somewhere to throw away his clippings. But he couldn't find anywhere and he got mad. He started jumping up and down because he was so mad. Then he accidentally dropped his toenail clippings over the side of the cloud and they fell to the earth. They clippings burrowed into the ground like seeds and grew up to be white man. Coyote, he looked down at his newest creation and said, "Oh, shit.”
― Sherman Alexie, The Lone Ranger and Tonto Fistfight in Heaven

The coyote intrigues me,  and I love watching them do coyote things.

We have a female coyote who lives on the quarter section next to us.
I have watched her throughout the summer and now into the first part of winter.
She followed the tractor around this summer during haying, hunting mice as we were cutting.

Two days a go it was a glorious winter day.
I was out taking pictures of the lovely frosty wonderland.

I was over at the cows, when I noticed the coyote checking out the hay bales at the cows for mice. 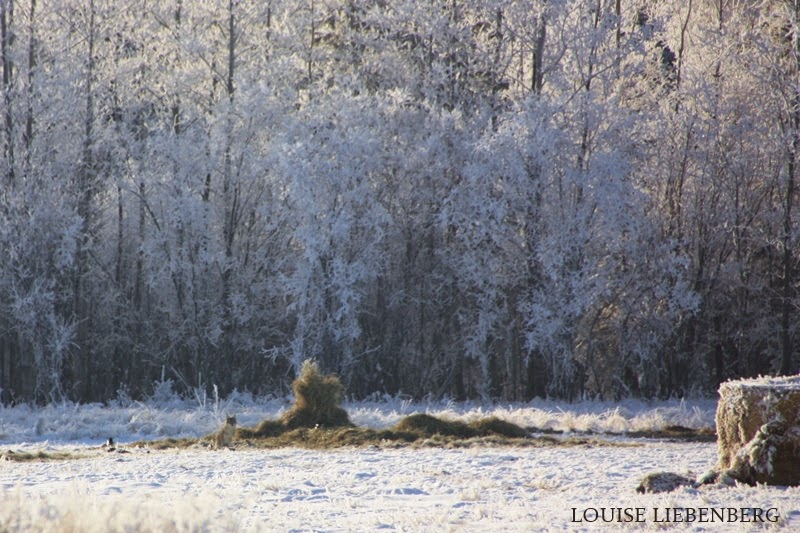 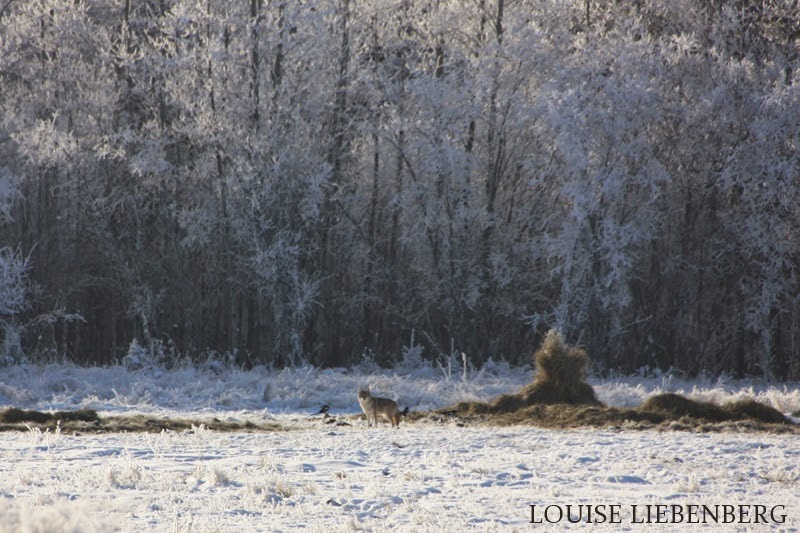 She trotted along, coming towards me
and checking out another bale on the way. 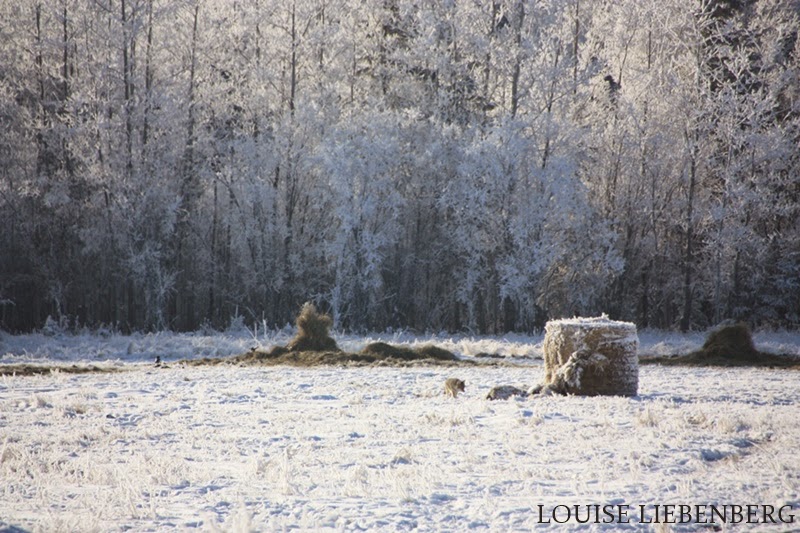 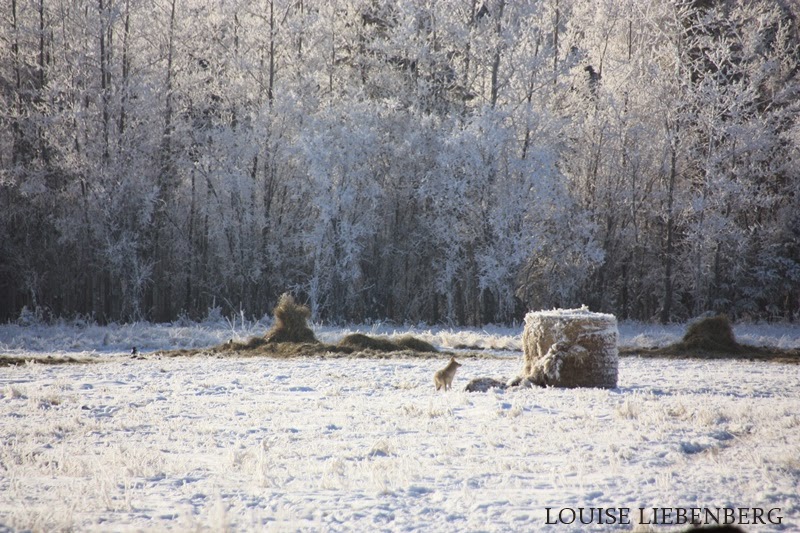 She walked behind the cows, peed on a clump of grass. 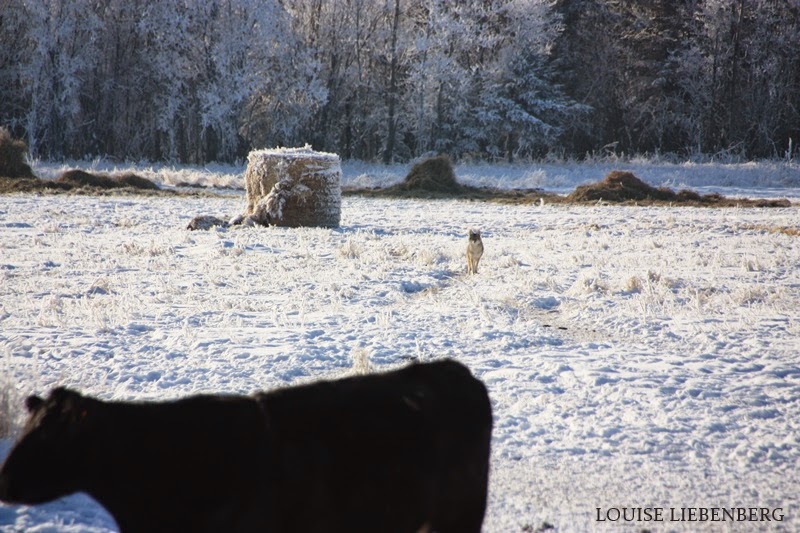 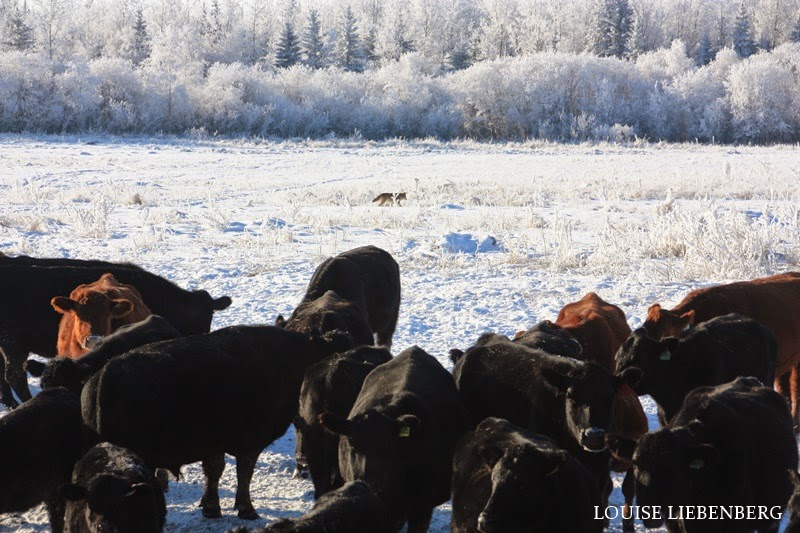 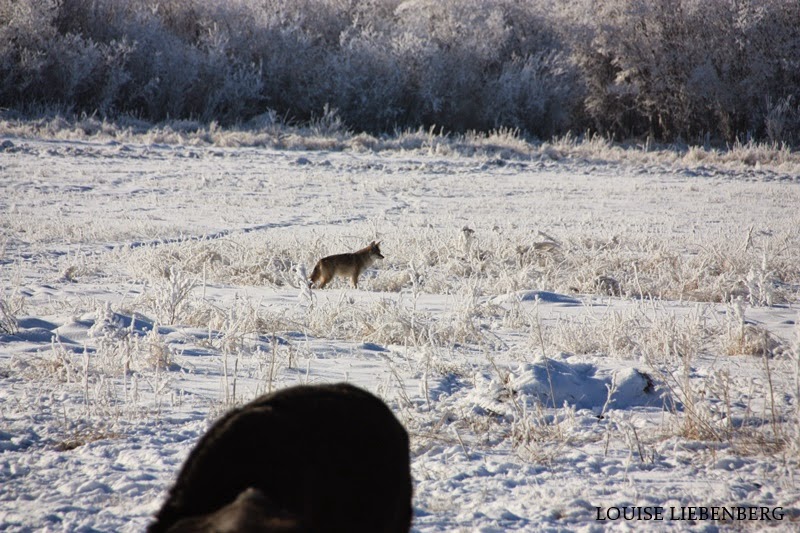 Stopped and stared at me for a moment. 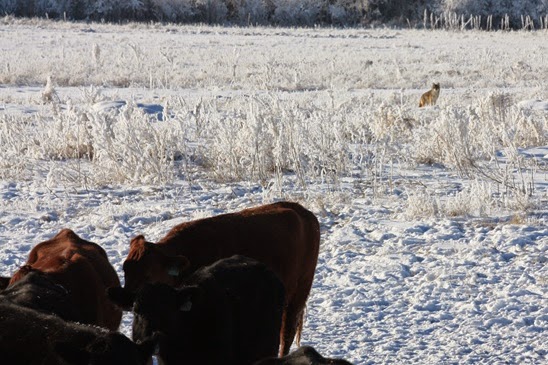 Unfazed, she continues on her route. 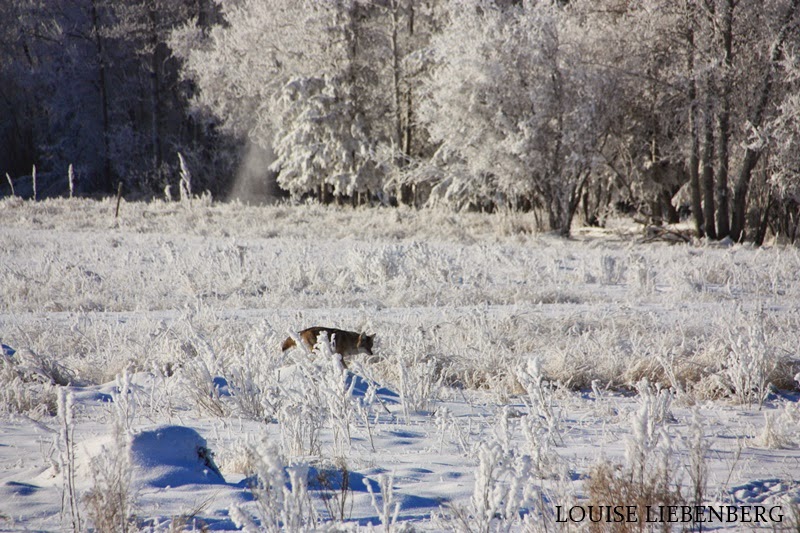 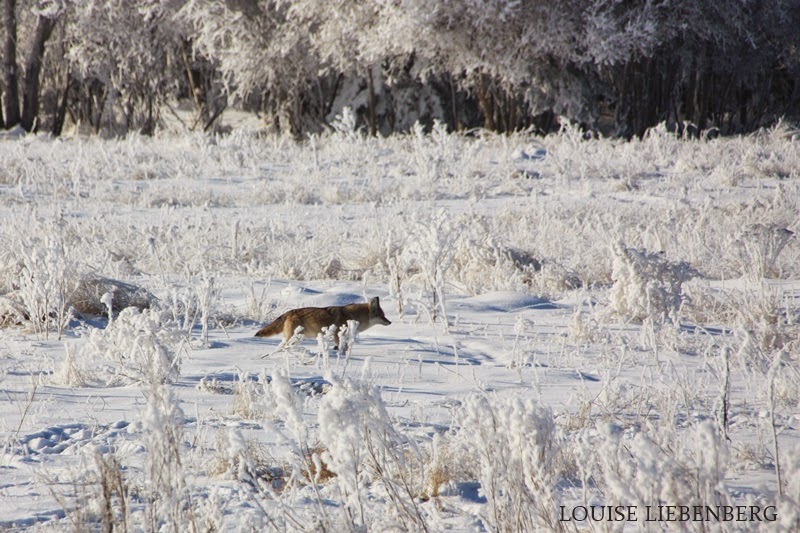 Listening for a mouse under the snow. 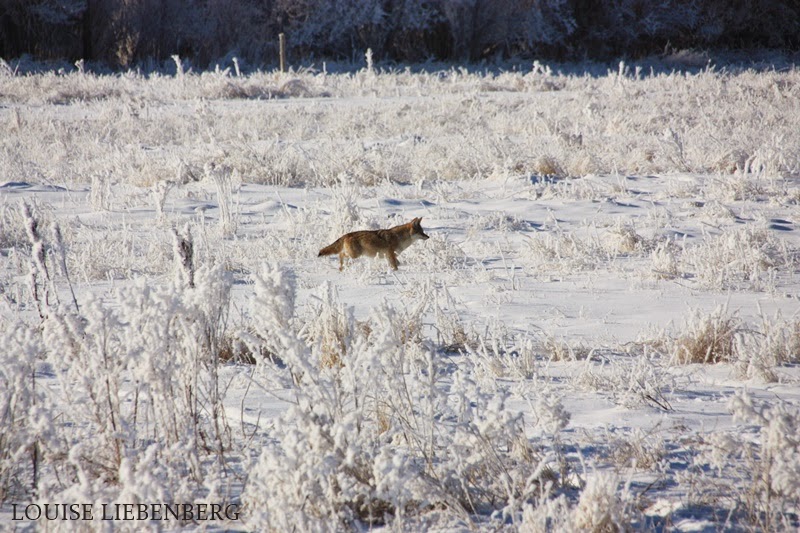 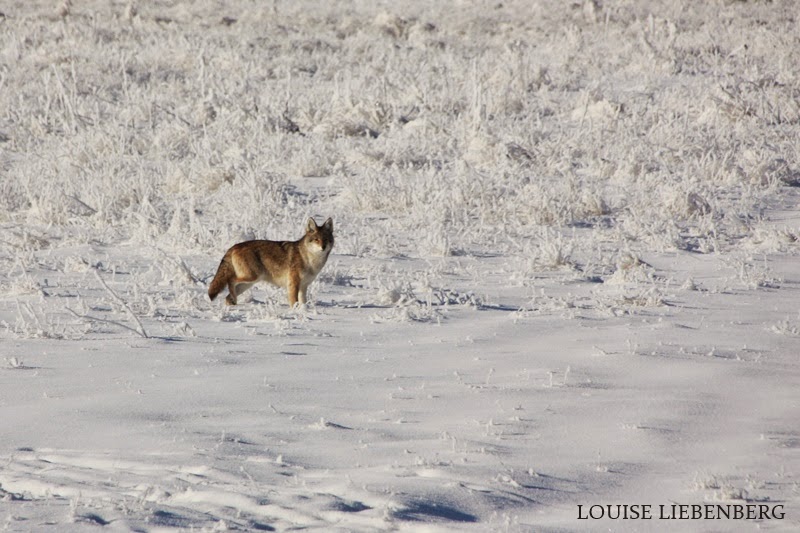 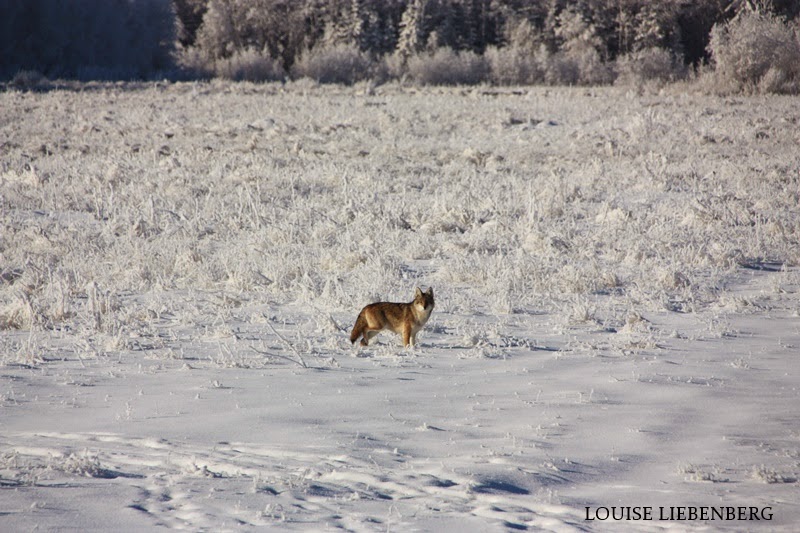 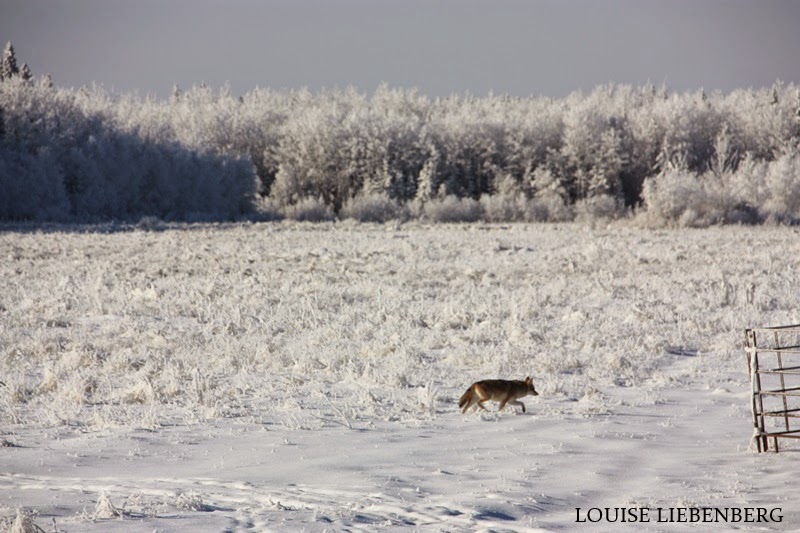 She took a small detour around the cattle corral and cute and
headed off behind some tall grass. 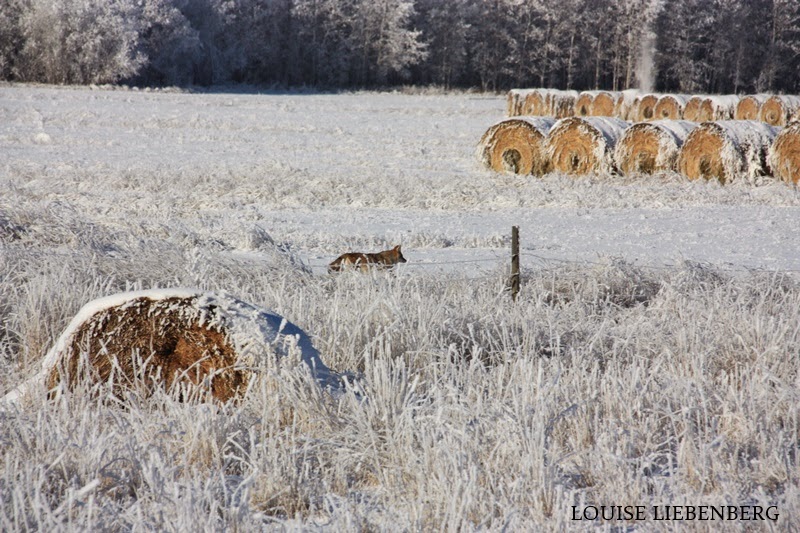 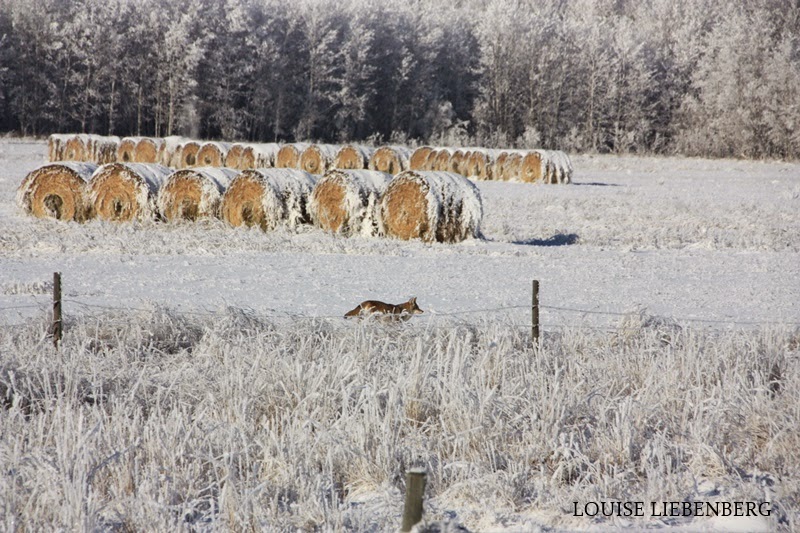 As she was passing the tall grass, she stopped.
She stood up on her hind legs and scanned in the direction the sheep and the dogs were in.
(The dogs are fenced in with the sheep in a pasture close by).

Checking that it would be safe for her to proceed. 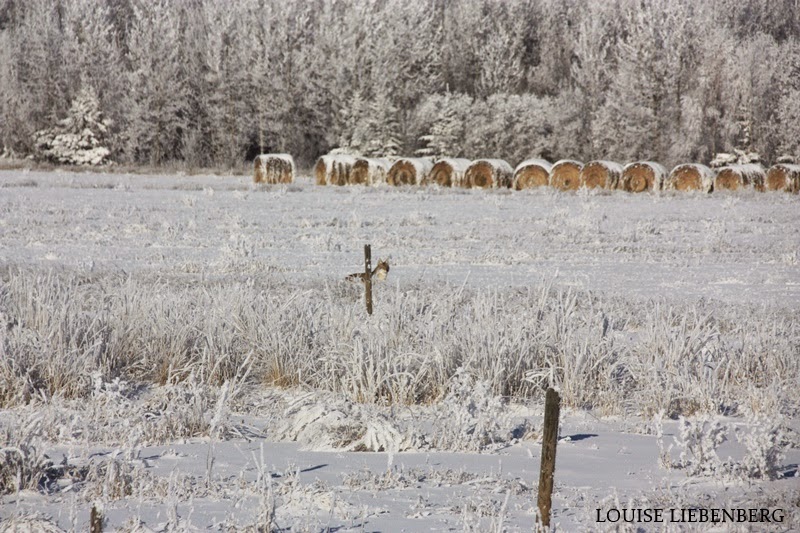 The coyote took a good look around before proceeding into, open ground at a lope.

She must have realized that once she headed off in that direction, she would be vulnerable to the dogs
who guard the sheep.
So, she first checked where the dogs where,
from the safety and cover of the tall grass
before heading off again, on coyote business. 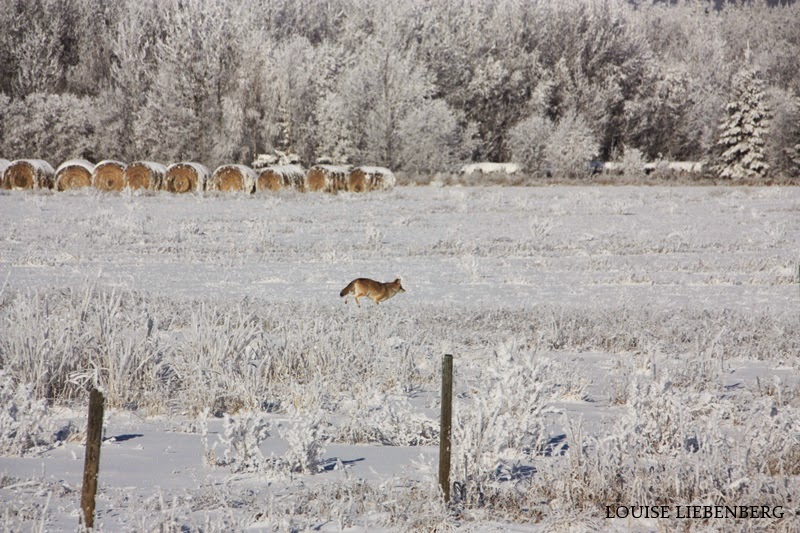 After that initial sprint,  she headed down coyote highway to a wooded section of our ranch.
Confident that she would be safe.
The tracks in the foreground are coyote tracks. 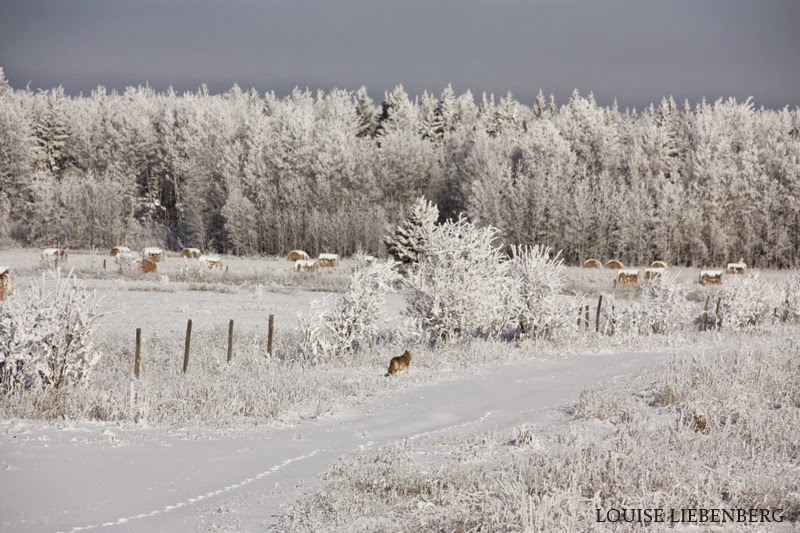 Stopping briefly to give me one last look,
she trotted on down the path. 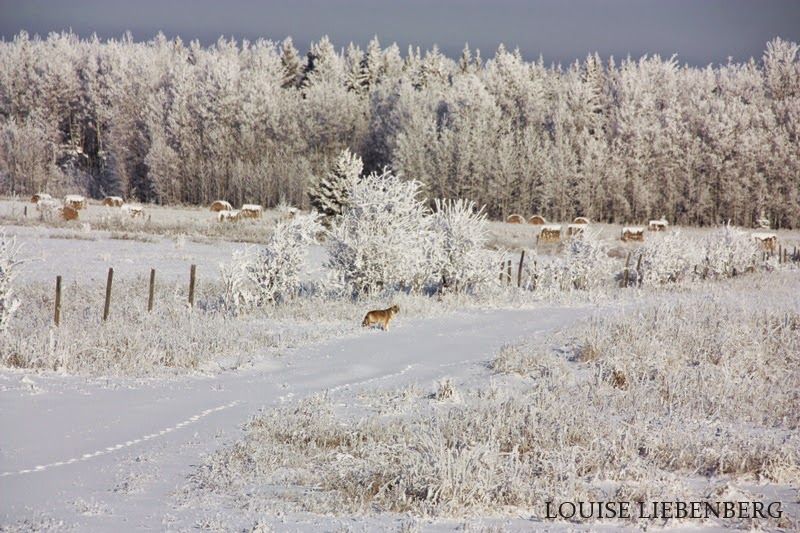 The coyote understands the boundaries,
checks an area before proceeding ahead.
The dog's keep the sheep safe and define their territory.

Both, understand the rules,
and by respecting these rules,
the sheep are safe,
and the coyote can live another day.

And, perhaps I can continue to marvel at her beauty
in this frozen landscape.
Posted by Louise Liebenberg