"Any idiot can face a crisis - it's day to day living that wears you out."
~ Anton Chekhov


I have decided to write a reflection on the last 4-5 weeks of lambing and calving.
It was a rough one.
The weather certainly did not help, today is May 2nd and we still have some snow left.
Winter started on October 10 , 2012
it has been a long snowy winter.
Last year during breeding time we decided to combine calving and lambing at the same time, (if you are out checking in any case you may as well check both, was the theory behind that thought..) and we decided to extend the lambing season by a few more weeks ( because the weather will be nice and we can then do two sheep breeding cycles..).
Eric said he would take some time off his work to come and help at home.
However, things did not pan out that way, as he was promoted and took over running a new office in a town a bit further away. His new job commenced just as lambing and calving started, and he could not take any time off. That meant that he was only available to help out in the evenings after work. However, we were expecting some help; a man from the Netherlands would come and help out for 4 weeks during lambing time. This was a big relief, an extra pair of hand to help with daily chores, feeding and watering does make a huge difference.
Lambing was underway when our help arrived.
After a long flight he was rather tired, however we needed to get going as lambing was speeding up and I needed to teach him the basics of looking after the sheep.
After a few days, I started having some doubts whether this man would be a help to us or not.
Not because of a lack of trying on his part, but rather due to an overestimation (that he would be able to do more, quicker) on my part and an underestimation (how busy and tiring the work can be) on his part.

Things slowly started to disintegrate between us. I battled to work around his inertia, deal with his depressions and handle his mindset. After two weeks of stress, an overload in work, dealing with weak, premature lambs, Eric and I decided to ask him to leave our ranch.
The stress of having him here, was just too much for us to handle.
Asking him to leave was a tough decision; we knew it would be for the best; however it is still hard to do.
It created a lot of stress that we really did not need right then.

Looking back on this, we do realise that perhaps this man was not fully aware on how much time and work goes into running a ranch like ours, the physical demands and 24 hour days can be tough. However, the problems that presented themselves where more of a mental nature than physical. We can deal with people who are tired, clueless and slow, but we cannot deal with another persons’ fragile state of mind at a time when we are working on the edge ourselves.
The lesson we learn from this experience is that sometimes people cannot judge for themselves in what mental or physical state they are in.  All we can do in the future is make very clear what we expect, explain the workload and have a built in “trial period”. I think sometimes people forget that when they come to help on our ranch, it feels like a holiday to them, however it is our work, day in and day out.
We too have stresses,
irritability,
have disagreements,
and are sometimes downright grouchy.
We make long days, worry about paying the bills, juggle commitments and the care for the animals. Sometimes life on the ranch is not always about smelling the roses, cuddling cute lambs and playing with the puppies.
Anyway back to the lambing; after we had sorted out the ewes that were due to lamb, we put them in the barn. Lambing came fast and furious.
What made the work so much intense this round, was the large number of smaller lambs being born and the care required to keep them going.

We did lose some of the premature lambs, weak ones and had a whole bunch of mothers who were just not interested in looking after their little ones.
Eric and I made the decision to cull every ewe that did not raise a lamb this spring.
So, every ewe that lost her baby, abandoned it or did not raise it got a big red X on her butt and was added to the cull list.
Breeding from bad mothers, breeds more bad mothers down the road. We had made the decision in the Netherlands years ago to cull all the bad ones and that did payoff;
down the road we had a flock that was low maintenance, easy keepers and a pleasure to work with.
We have spent the last five years building up our flock and have not done any serious culling. This year will be a deciding year for many of these sheep.

Calving has actually been ok. It started off with a dead calf, and then a cow that stole a calf from another cow; she later had her own baby and wanted nothing to do with her own baby, all she was focused on was the stolen one. After a few bottles, building a corral, catching the thieving cow, forcing her to love her own baby, removing the stolen calf and its momma…
The cow finally took her own calf back and the stolen calf was given back to its mom.


No real big calving problems, but we did lose a calf in a snowstorm.
The same decision applies to the cows as to the sheep, if you do not raise a baby this year, you are out.
We had a little hiccup with a heifer that calved and misplaced her own calf… that story may have a follow up. Those who follow me on facebook might have seen that little story come by this past week.

Sadly, during all of this, we also lost one of our nicest and best border collies in this period.  Zac, one of Eric’s collies was eleven years old. He was still working on the ranch and was such a great dog to have around. He was hard working, dedicated and was the local star at the “Muttin Busting” at our two local rodeos every year.  He was fine one day, the following day he was “down”, his gums a little yellow. The next day he was sick, wobbly and very jaundiced. I took him to the vet, while we where there, made the decision to have him euthanized  He was extremely ill.
As the vet later said; “sometimes the kindest decisions are the hardest to make” 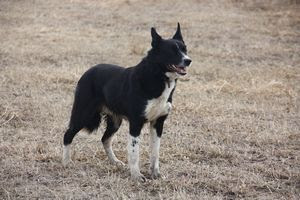 And, then a big snow storm rolled in,
our lambs had been lounging around in the sun.
With this storm, we decided it would be wise choice to move all the ewes and lambs back into the barn.
this was a full days work, we spent lots of time checking lambs, stomach tubing and bottling weak ones.
A big move at this stage is never a good idea, however leaving the babies out in a wicked snow storm is also not a great plan.
We hunkered down, worked hard and moved over 300 lambs and their moms back indoors.

With lambing every few months, we do get into a routine.
Eric works the evening shift until 1am, while I sleep.
I go out and do the 2-4 am shift.
Somebody, sometimes the kids do a check before school.
The days are filled with feeding, marking, tagging, registering, docking, checking, bottles, vaccinating.
Feeding is the big day time job.

As always, life goes on, even if we are living in a haze of exhaustion, lambs and have a feeling that the barn is our entire world.
We have  4-H sheep meetings, a spring rodeo, training with the horses, Jess getting ready for a trip to Ottawa, Eric a new job, school and other daily commitments.
I have not had the time, nor the energy to want to blog during this period.
I hope this one will update you, with what has been happening here.

By the way, I don’t want any sympathy when I tell you  how busy we are.
These are choices we make,
although  we may bitch and complain now and again....
We have about 5 ewes left to lamb and about 7 cows to calve.
So, the end is in sight.
We are now hoping that spring will start.