Sometime last week I posted this story on Facebook, some people have been asking me how things are going with the little fellow.
Well, he has a name, and that is Gus, (when they get names here, it usually means that their momma is not doing too good...)
So, for those who missed the facebook post here it is to catch you up with that part of this saga.

This morning (last week then) started off with a dead sheep and a lost calf.
Now, if the sheep has already departed from this life, then there is nothing I can possibly do to fix, save or revive it. That is a lost cause.
However, a missing calf,  still has the potential to still be alive.
So, my efforts went into looking for the lost baby calf..

I could see that this young heifer (first time calver) had calved, however she was standing in with the other cows, chewing her hay and not showing any maternal instincts whatsoever.
So, I started my search.
Now, our cows have the run of a pretty big, heavily forested pasture to calve in. This provides them with shelter from snowstorms but, does make it hard to find lost newborns. So, I spent about 2 hours combing through a foot of snow in the bushes, looking behind stumps and trees, and inspecting all mounds.
I found no signs of a calving spot, no body, lots of coyote tracks and I started fearing the worse.

Even, if a calf dies or is stillborn I do like to have an actual body.
I don't like open ends.
Anyways, after resigning myself to the fact that the little calf was probably not around I ended my search.

Tonight, while doing my afternoon round I decided to extend my search a bit further and low and behold, lying in a puddle of water was this little red heap of cold calf.
Alive.
So, I picked him/her up, tossed it over my shoulder ( he was small)  and headed back to cow civilization.
I asked Eric to get a warm bottle of colostrum ready to feed the babe. I managed to herd the uninterested momma in a makeshift pen, stomach tubed baby and reunited the two... So, now I am happy that we found this little one, it kind of makes the day good again.

Okay, since that event, here is what has been happening;
his mother is still not licking his ears, or nuzzling him, or allowing him to drink.
He was pretty weak, so ever time she stepped away, he would fall over and he got a bit disheartened about getting a drink.


So, I rigged up a gate so that I could squeeze her in and then allow Gus to suck through the gate.
He was doing okay,
She is not a mean heifer and would not kick at him or anything, just would not allow him to drink.
Usually, after a few days of this, most cows will accept the baby and things will be all hunky dory.

However, not with her.
So, to make sure that Gus got stronger we started to bottle feed him.
We figured if he got stronger, he could "demand" milk and be able to latch onto her a bit better.
This became the worse moment of the day for his mother!
(I called her all kinds of really nasty and horrid names and I actually feel very justified in doing so.
Even though it may not help the "situation" it does help release some frustrations on my part).
And,  the highlight of Gus's day.
He would first be helped to drink sweet warm milk from the cow and that would be followed with a nice bottle of milk from me.
I would whisper sweet nothings in his ears, so that he would feel loved. 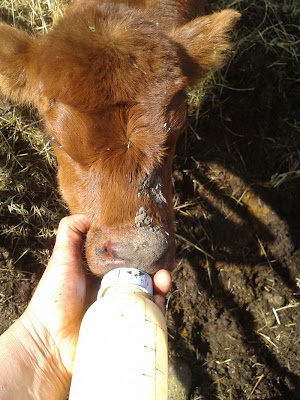 Today, while out with the reluctant cow,
Eric decided it was time to put an end to all her juggling about.
It was time now to quit her nonsense,
man up and face her motherly duties of raising little Gus.
She was duly haltered, (in the process she banged Eric's hand on the railing, and now it is  swollen)
and is now tied up.
In tying her, she cannot walk away or jiggle around, and in this way Gus can have a better chance of steling a drink.

We will see how this turns out... will be continued.

Mmmm,
why, do all my stories end up having "parts" to them,
why could it not have been that heifer 29,
found her baby and loved it forever more
and they lived happily ever after?