It is not always easy to keep the peace between the guardian dogs.
With the sheep in a smaller, winter corral (12 acres) and not too much predator pressure,
the tensions between the dogs can run a bit high a times.
Vuk and Beli have spent a lot of time together,
they have rumbled on occasion,
had the odd disagreement and then after a while,
they are back to being best buddies again.
These "rumbles" are quick and noisy,
usually no real damage is done.
Except for some hurt ego and dented pride!

The females, on the other hand
tend to behave  like the Real Housewives from Hell.
They have these quiet  fights,  that usually ends up with some blood,
and gore some where.
This normally  requires antibiotics and some healing/down time.
They never really  become best buddies (like the boys)
and like to hold a grudge.
They wait, and look for a new opportunity to get revenge!
Now, to avoid major issues,
we generally have a number of groups of dogs,
partnering together in various fields with different stock.
The level of training will often determine who is in with who.
These groups are not static and I will often move the dogs around.
A few weeks back, I needed to make some changes.
Katcha, who is a pretty dominant bitch, got into a cat fight with Alaska.
She needed to move.
As,  Snowy would also need to move into the barn to have her pups.
I knew  that I  needed to have another dog in with Fena and the ewes.
So, as Katcha needed a new spot,
I came to the conclusion that Katcha could
move in with Fena, to assist with the guarding duties at the ewe flock.
That meant that Fena and Katcha would need to work together.
They did last summer.
When I placed Katcha in the field the "meet and greet" started:
Here, Katcha (left) and Fena (right) meet up again. 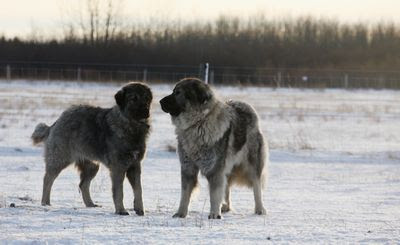 The meeting was tense,
they were eyeballing each other
and went through the various stages of circling, stiff legs etc.
Fena decided to break the tension with a small play bow.
They ignored each other and each went about their own business.
Great!
Next, Katcha went over to Snowy.
As, you can see this was way more amicable...
"Hey, howdy whatcha doing?..." 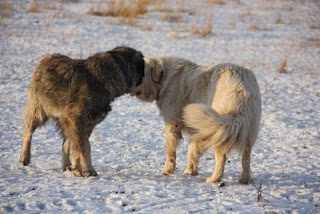 A little while later,
Fena and Katcha meet up again,
and both are still rather edgy.
Things were not looking too bad,
they were, at least,
not trying to rip out each others throats or so... 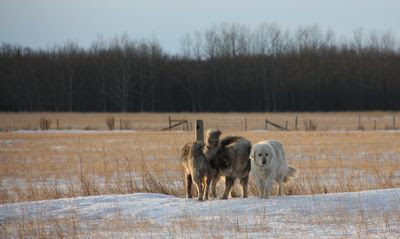 It seemed like things would go okay.
And it did,
for about three days...
and once again the antibiotics and wound salve was needed.
Posted by Louise Liebenberg