Part 4: Portugal and the cows 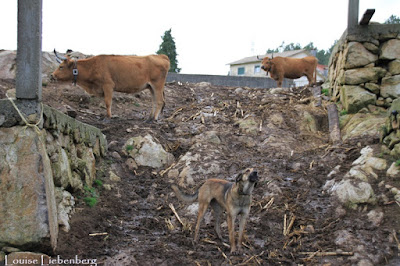 I have mentioned before that the system with the cows is similar to the sheep and goats.
The cows are let out in the morning, and are brought to the mountains where they spend the day grazing. In the evening the cows either head home on their own or are gathered by the owner.

We had supper with José Ferreira, the owner of these cows, , and the next morning we could follow him and his cows to the mountain.

The cows spend the days mostly alone in the mountains. All the cows have bells, and each cow has a different sounding bell/s. The owner can recognize each cow by the sound of the bell.
The bells helps the owner locate the cows in the mountains and can hear if one wonders off. In some areas the cows are shepherded. There are some jokes about whether the bells are like a dinner bell to the wolves 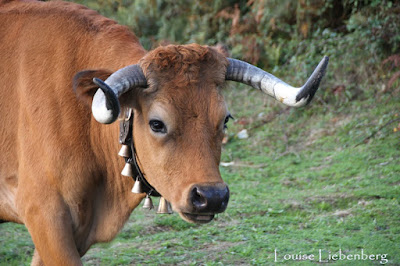 Wolves certainly target new born calves, the traditional breeds of Portuguese cows are smaller type and the calves and younger cattle are  vulnerable. These cattle are also super docile. The do have horns and they can use them to protect themselves, but these cows are not like some of our wild rangy cows we have here.

Some of the Portuguese ranchers have found that the imported breeds have more issues with wolf predation, as they are not as suited to the environment as local breeds.

We spent the morning following the cows through the village to the mountains, talking about the issues they are facing.
It was quite the walk between the houses, past the terraces, climbing narrow stairways and getting the odd wayward cow back on track. 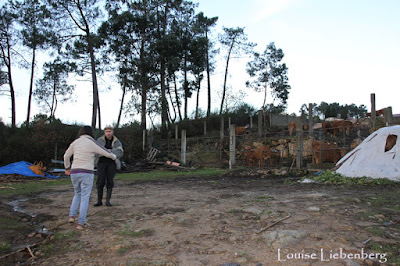 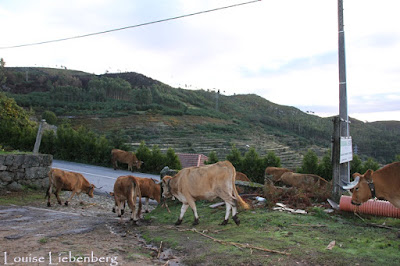 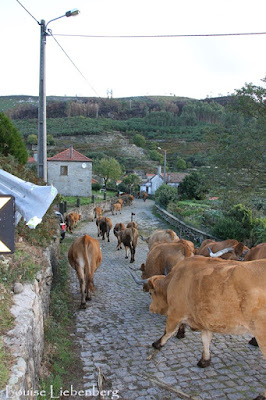 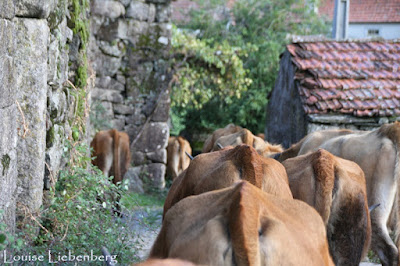 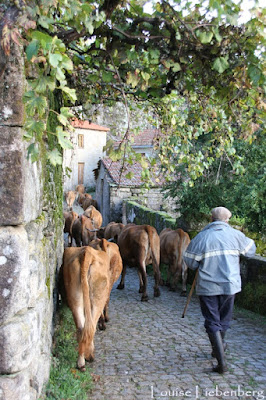 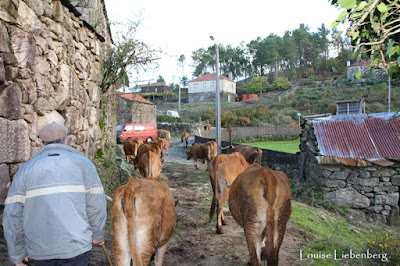 Once through the village the cows head into the mountains to graze for the day. 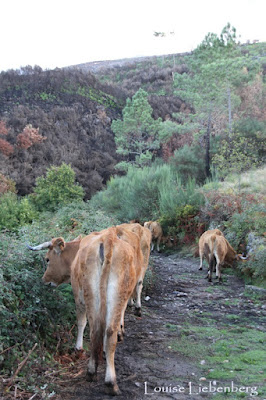 This man has lost a few dogs due to poisoning, right now he has a new younger dogs, who is staying cak in the village to "bond" more to the calves at home, before being allowed into the mountains with the cow herd.
This is the new young estrela dog, still in the bonding stage with the cows.
This dog was part of the Medwolf project dogs. 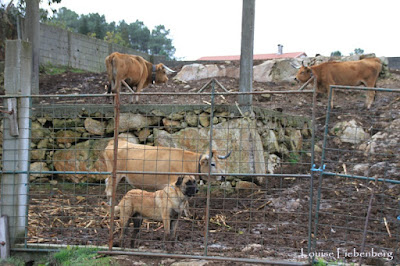 Due to the poising issues, both dogs are still staying in the cattle yard. 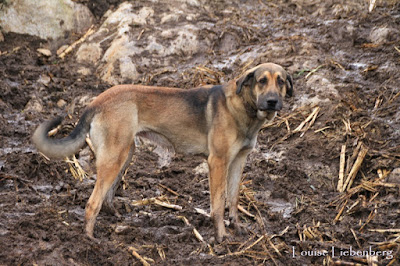 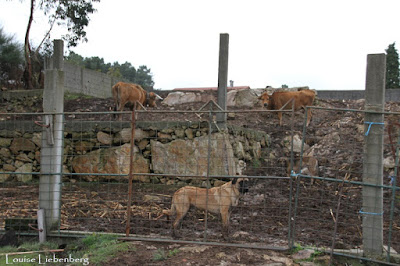 In the local coffee shop, on the notice board was a poster hanging up for an event in town.
a good opportunity to educate people about the use of LGD with cattle. 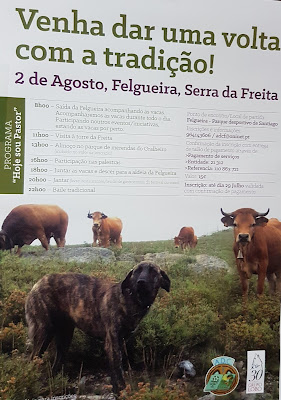 Once the cows were away, we headed back to yard. It was a wonderful opportunity to talks to José  about his cows, his dogs and the situation with wolves in Portugal.

As fellow cattle people I was also interested to learn about the business side to his operation.
His primary business is to sell veal calves from this Portuguese breed. So, the cows calve and stay indoors for a few weeks. After about 3 weeks, the cows join the herd to go and graze and the calf stays behind.
Initially, the cow wants to return back to her calf but they bring her back to the mountain. If she is very persistent in coming back, they will let her return home, but she will not be allowed to go to her calf until the time the herd returns, within a few days she has the system figured and will stay and graze. She is reunited with the calf for the night. By keeping these calves home, they are less vulnerable to depredation. 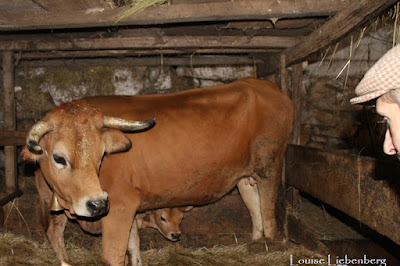 The calves are small, and when old enough to go for meat production they might weigh 250-300 Kgs live weight. They are fed when the cows are away at night and allowed to drink milk at night.
The calves are sold for meat production and some heifers are returned as replacement heifers and others sold as breeding stock. The longevity of these cows is long, so they do not have to replace the heifers very often.
These farmers get various European Union subsidies, for maintaining the landscape, as well as  keeping these local Portuguese breeds. The subsidies that many of these farmers receive are the financial backbone of their operations. 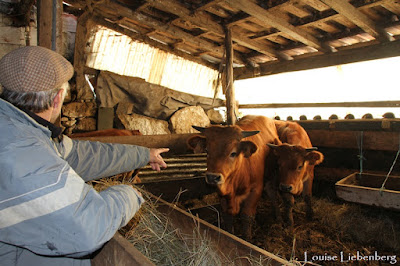 José, is enthusiastic about utilizing the guardian dogs, but the problems with lost dogs is a big issue. He is willing and motivated to find solutions for living with the wolves.
He was also one of the speakers at the meeting for livestock keepers. 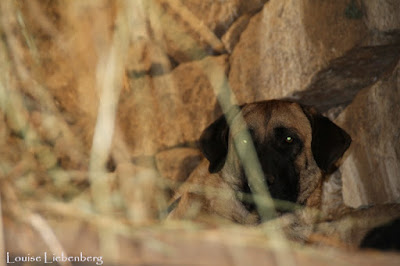 A few short  clips when the cows start heading out in the morning.