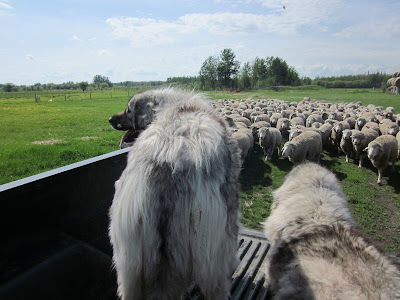 The sheep have been out to pasture for a few weeks now.
The cattle desperately needed to go to.
I managed to rent pasture for the cows just down the road from our ranch.
However, we needed to do a lot of fence repairs, build other parts back up and check that everything was in order as there had not been cows in that pasture for a few years.

The next challenge was to gather up the bovines,
in order  to vaccinate, worm and check for any other health concerns.
We have had weeks of rain and we did not have a dry spot on the ranch to work with them.
Our entire place was totally flooded and under about 6 inches of water.
Handling cattle in these circumstances is no fun at all.

Now, living on a dead end road has its advantages,
not many people come down the road.
So, I decided to build a handling corral with chute and all,
right on the gravel road.

I needed to build a temporary electric fence to guide the cows to the chutes,
but the choice of either building that fence or handling cattle knee deep in the mud
was easily made.

It took two days to fix the pasture fence,
it took another day to build the corrals,
and then I needed Eric to be home to help with the treating, loading and moving of the cows.
I did not want a repeat of the kick in the face.
I needed a crew I could rely on!

So,   last Saturday, we convinced the cows to leave their winter bush pasture.
That part went really smooth, except for one little red calf that decided to put its tail in the air and run away.
After a few attempts we decided to leave him be and try later.
It took our whole family ( Eric, me, Jess and Roy),
plus a bunch of cows to convince the little critter to come along with the group.

We moved the cows into the chutes,
caught them in the head gate,
(they hate this as they know bad things happen in the there). 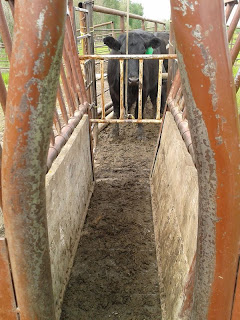 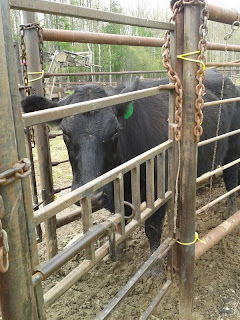 Once caught they get two needles and a pour on for the parasites.
From the cattle squeeze, they step directly onto the trailer. 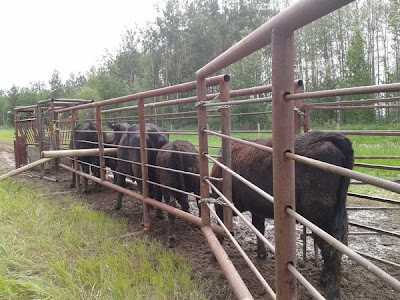 A short ride down the road and they are sent out to pasture.
The lush green grass soon makes them forget the negative experience in the chute. 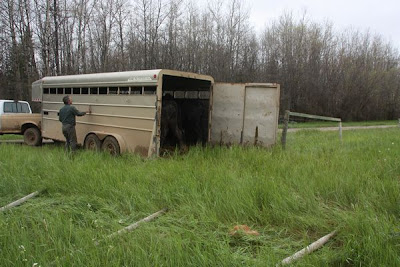 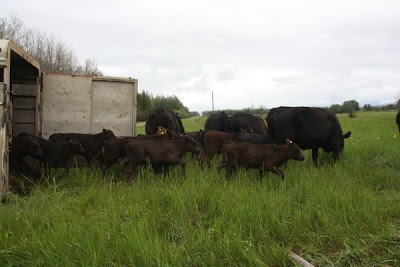 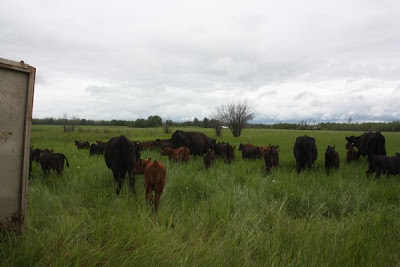 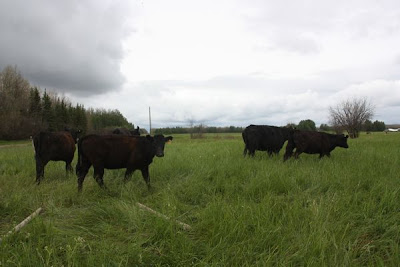 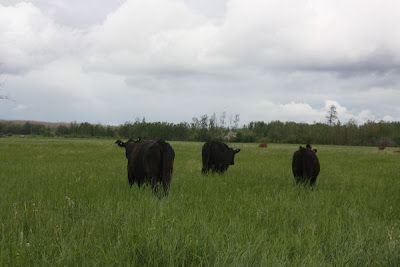 At 5 pm the last load got let out,
we were dirty, smelly, tired but pleased that that big chore was done.
A pig roast at some friends rounded out the evening.

A few days later, I decided it was time to break down the corral on the road.
I drove over with the tractor to start moving the panels.
I look over to the bush,
and lo and behold,
laying in the trees,
was a cow.

S#*t.
Darn,
and I few other choice words were uttered in my not so inner voice.

So, I started the process again,
gathered the cow,
drove her to the corral,
locked her in the race,
forced her into the squeeze,
went back home to get the vaccine and pour on,
hitched on the stock trailer,
backed  up a quarter mile to the chute,
jabbed and poked the poor cow,
loaded her up,
and brought her to her buddies, her calf and the lush green grass.

Have a great Summer Solstice.
I am rather sad about the solstice,
as it once again reminds us that the days will be getting shorter again. 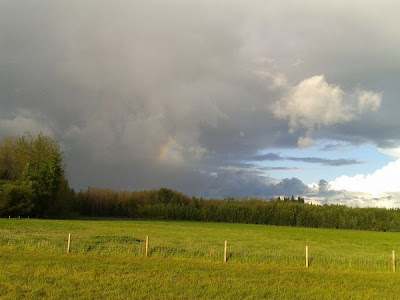