The news yesterday,
was full of how the notorious Mexican drug king "El Chapo" escaped from jail.
Some of our young cows and one bull (10 in total),
must have heard about this and decided to do their own version of a jail break.

After carefully rubbing up against the gate, they managed to unlatch the gate, the gate fell down and the road to freedom was wide open.

At 7pm we got a call that our cows were on a walkabout.
They were in the garden of the people who called, then at the dugout and then..
gone.

We grabbed Lad out of semi retirement,
hopped into the car and headed the 40 km up north to go and find the wayward bovines.
We searched and searched but to no avail.
They were either hiding out or on the move.

A while later, we got a phone call that some cows were spotted a few miles down the road, in a field.
Eric raced off to see if he could find them.
After a few more miles, he finally found them and headed them off.
I came  later with Lad after searching in some bush for them. 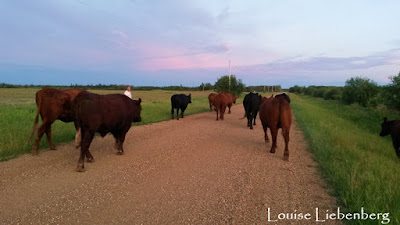 So, we gently turned them around and  started to walk them back,
through grasshopper infested hay fields, through the blooming canola, along the bush edge, past the dugout, over a downed fence, through an oat field, cut across another canola field, along the road and then back into the pasture. 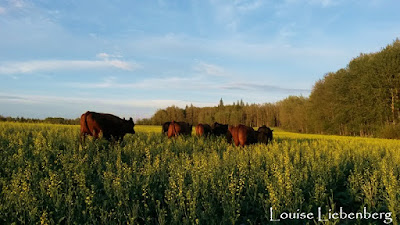 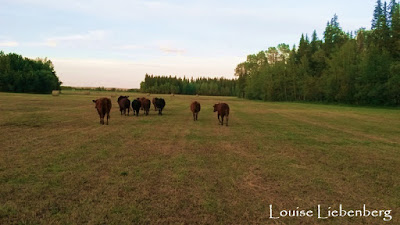 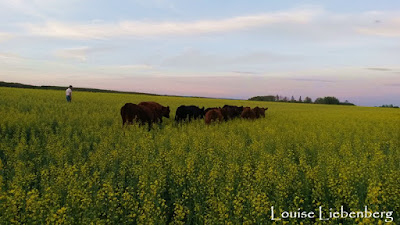 The cows had a few moments of hesitation, and some did  consider high tailing it away,
but our low stress cattle handling clinic we did a few years back, paid off.
The cattle were calm, the wife ( me) was not yelled at and the dog was pretty calm too. 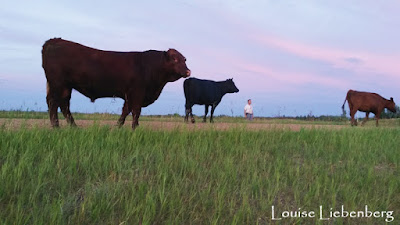 After a good long walk, with a lovely backdrop of the setting sun ,
the cows arrived safe and sound back at their pasture at about 11pm.

A few extra latches on the gate, and a few beers later,
we arrived back home knowing we " got our man",
let's see how quick the Mexicans can get theirs! 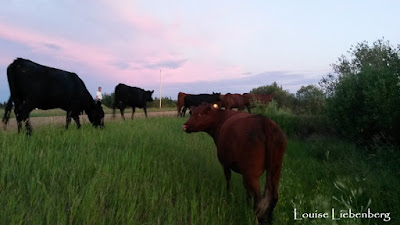