I know nothing except the fact of my ignorance ~Socrates

Let’s talk about ignorance for a moment.
The dictionary states that ignorance is:
“lack of knowledge, information, or education; the state of being ignorant”.


That  defines me quite accurately..
now and 17 years ago.

I have been rather concerned about my Border Collie Sheila.
I had tried to breed her to Zac about a year ago and that did not result in any puppies.
Eric wanted a pup from her and as Lad is going to be 10 years old I decided that I would love to have a last pup from my “old line” as well.
So, we decided to breed Sheila and Lad this summer.
She came into heat and I placed her and Lad together for a little romantic sojourn.
Unfortunatley, Lad did not breed her, despite my best efforts.
I attributed this to Lad's age and Sheila's unwillingness.


A few weeks back I started to get very concerned as Sheila had a lump on her udder,
a mammary tumor.
Not only that, she had a distended belly and has looking rather poor.

(I am pretty sure you guys are not as ignorant as me and have probably figured out where this going..)

I got more and more concerned about her and despite my feeling and probing, I could not feel anything in there, and knowing that Lad did not breed her,
I was not really looking for "anything".

I thought it could be a mass and that the mammary tumor had possibly spread.
I prepared the kids for the worse case scenario that Sheila may die.
We were all a little despondent, however decided to watch if things progressed or remained the same.
In the mean time, Eric decided to buy a border collie pup from very good friends of ours.
On the way back from the Goat breeders conference last Sunday, we collected the new little tyke “Dexter”.  A real charmer, and oh so cute. 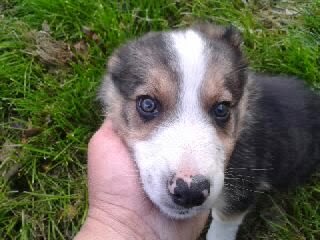 When we arrived home, we came home to a BIG surprise..
Sheila whelped 5 sweet tiny little border collie pups.
I could not believe my eyes.
How could I have missed this?
Where did Sheila hide those pups?
After, a little pondering, I figured it was not so surprising after all.. 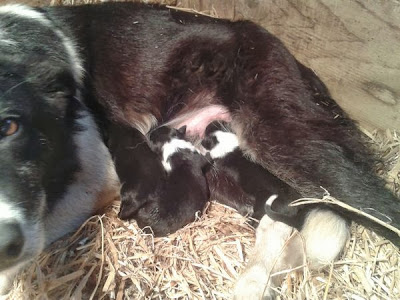 17 years ago, I was travelling a fair amount,
Eric and I had been in a relationship for 5 years,
and I will admit that I was little careless with taking those little daily pills.
I was rather ill, but attributed that to all the travelling I was doing.
After a while things got better,
…  a niggling feeling crept up into my mind..
it turned out that I was pregnant with Jess.

Do you see the pattern here? 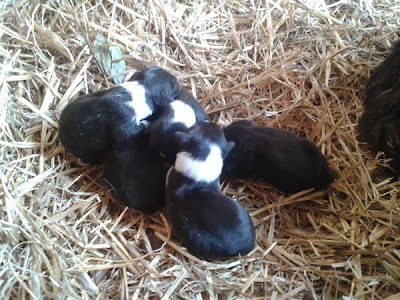 Anyway, much to our surprise (and delight, and apprehension, we now have 4 very sweet border collie girls and one little lad and, of course our lovely daughter Jess!!)

It has been about 4 years since we have had a litter of border collie pups.
So, while we had planned, hoped and dreamed of this litter, it was still a surprise.
We were preparing for Sheila's possible end,
and all it turned out to be was motherhood..
sigh

In fact, when I checked back on the calendar, this would have been her due date, however, as I did not see the breeding, I falsely assumed that she had not been bred.
I never thought to check on the date again,
and the thought did not even cross my mind when her tummy started growing.
How is that for ignorance? 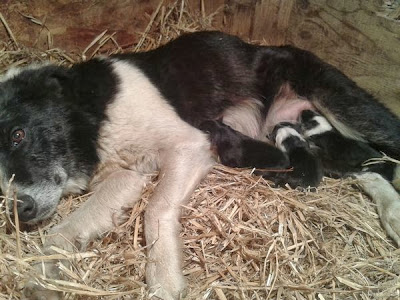 Confuscious does however make me feel a little less stupid;
“Real knowledge is to know the extent of one's ignorance”

So, although planned, but not expected, we now have a litter of top notch working dogs. Sheila is the work horse, she is pushy and an excellent flock dog. We have owned her mother Flash and her grandmother Gael (who passed away at the good age of 17), we have had numerous half brothers and sisters. This is a female line that has suited us for all these years, hard working, a touch stubborn and stylish dogs. Lad, the father of these pups, is my soul mate. He is my "go to" dog for everything and is never farther away than a few meters from my side.  He works the flock, he works cattle and he can trial.
Some of his offspring have been doing very well in the agility world here in Canada.

These pups promise to be fantastic dogs.
Lad was imported from Wales and Sheila's parents both came from Wales many years ago. These pups will be ISDS registered, both parents are DNA tested and “normal” for CEA, both have had regular ophthalmic exams and are free of PRA. Both parents are hip tested and both have good hips. The pups will (of course) be vaccinated, micro-chipped, dewormed, and socialized.
So, we will be starting another round of puppy pictures, cuddling sessions. This will be the last litter of collies again for many years… and certainly the last pups for a while. 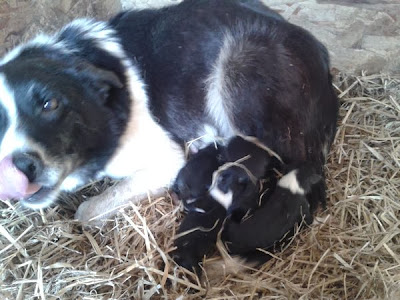