Chantal, our first ever sarplaninac, was not a dog that one would generally call aggressive.
She was never outwardly flaunting her aggression such as
gnashing her teeth or frothing at the mouth.

She was the epitome of calm,composure and strength.
She had all the very typical qualities that are attributed to this breed;

This breed has a typical livestock guarding temperament: highly intelligent and independent; devoted to family members and wary of strangers; calm and steady but fearless and quick to react to perceived threats. (UKC)

She was quite territorial.
She had a big bubble of personal space.
In her mind, that bubble could cover hundreds of acres.

Every night after shepherding, the dogs would come home with me once the sheep were safely back in their night corral.
We lived for a few years in camping area in a trailer, while waiting to be able to build our barn and dream home.
Our plot was surrounded by a high wooden fence.
Sometimes we would chat to some neighbours over the fence, and this was fine with Chantal.
However, if these people ever, as much as, laid one finger on the fence,
she would not hesitate to attempt to take their whole arm off.

She was not mean, just clear.

Occasionally, some poor person would decided to walk into our gate to come to our door.
Chantal would then walk up next to them, take hold of their arm  in her mouth,
gently but firmly,
not breaking any skin, and she would then escort them in.
The people were often  terrified by the time they arrived at the front door, fearing for their lives.
We knew, however, that Chantal had the good sense not to damage these poor people.
Once we greeted the people, she would leave their arm
and would then conveniently go and lie in between them and us.
She would give the impression that she was fast asleep,
but I know,
she always watched them through her semi closed eye lids.
She had her tactics.

We were asked to look after a friends border collie while they were away.
This dog, Tess, did not have many doggy social skills,
so, when she came to stay with us,
we wanted to make sure that she and Chantal were properly introduced.
Unfortunately, Tess decided to snap at Chantal.
And, in a typical Chantal fashion, she decided to set the record straight.

Directly, leaving no doubts.
Eric feared for little Tess's life.
So, he rushed in to save Tess
and  so, to make sure that Chantal kept her distance he yelled at her,
( he might have kicked towards her)
She stopped in her tracks,
gave Eric the stare down,
according to Eric she contemplated having a go at him.
Both had a standoff,
Eric calmed down,
Chantal calmed down
and Tess, well she calmed down too.

Chantal was canine aggressive.
She really disliked all other canines, except her own pack.
With our collies she was fine but she certainly just did not  tolerate strange dogs too well.
One night she slipped out of the gate and disappeared into the dark.
Eric and I had a melt down.
We needed to find her before she found some poor person walking their pooch.
We searched and searched.
We called to her, however, she had also these sarplaninac traits of being stubborn and independant,
so we knew the chances of her coming when we called where about zero.
While, out looking, Eric met up with a man walking his bouvier dog.
Eric asked this man if he had seen a dog running around free.
The man said he did not.
Eric asked him if he could accompany him on his walk, explaining that our dog had slipped out and we feared she might have a go at his dog.
The man, who was rather the "trailerpark boys" kind of man,
scoffed and said  he thinks his bouv would be ok.
Eric said fine, but I still want to find my dog.
So, the two of them were walking next to the lake,
when all of a sudden Chantal made a charge at the dog.
Eric managed to grab hold of her mid air, the man grabbed his dog
and togther they saved the day.
We really understood that day they we needed to make sure the gate was closed properly, we could not run the risk of Chantaleke roaming free where other dogs could be.


We were lambing out in the bush in this nature park.
We were not allowed to erect any permanent structure in the area, however every lambing we would erect some makeshift kind of shelter for the ewes and lambs that needed it for our lambing time.
This area would be fenced off and was closed to the public.
The public could look in, but we kept the gates locked.

Chantal would roam free in this area,
hanging out with the ewes and their babies. 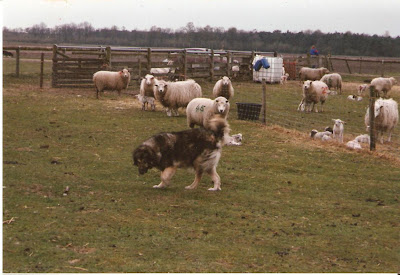 One day, we headed home for lunch, leaving Chantal on maternity watch.
When we came back we found a note on our gate saying
"the dog in this area is aggressive and bit me"
No name, no phone number, nothing.
So, Eric wrote on the note
" well, then you must have been somewhere,
where you should not have been"
and left the note on the gate.

Chantal understood the rules of conduct;
if you behaviour yourself,
do not invade the bubble,
climb over fences where you should not be,
don't mess with my peeps or sheep,
or if you are a dog and don't show proper social behaviour or come close to the sheep,
then we are fine.
She was a loving, friendly and devoted dog.
Cross the line and you would be dealt with in a typical sarplaninac way.
Simple, straight forward and clear.