This blog is not for the feint hearted,
or people with weak stomaches,
nor is it for
people who believe their dogs need to follow a vegan diet.

It contains pictures of blood, gore and guts.
It does not however,
but should,
have a "scratch and sniff" part.﻿
In order for you guys  to appreciate the full effect!

All until three of them decided to get into a free for all.
The result was two dead,
and one pretty beat up.

Due to some other busy jobs, we did not have time to process them.
However, this is no big deal as we live in a deep freeze climate here,
so the beef just froze up and waited for a moment when we would have time to work with it.

We did have a financial blow with the death of these bulls,
however we decided we needed to make the most of a bad situation.
You know "waste not, want not.."
The meat was certainly still great for the dogs.
One bull would feed our pack of dogs for at least two weeks.

So, a few weeks back Eric got going with one of them.
They have a program on Nat Geo or Discovery called Dirty Jobs,
This one ranks right up there.

Eric picks up the frozen carcass with the grapple on the tractor,
and then just cuts slices off the bull with the chainsaw. 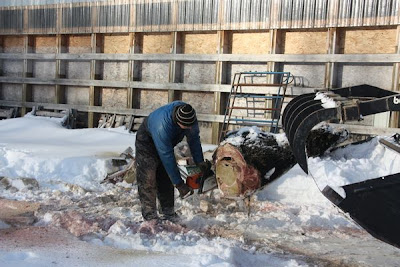 As the animals are not gutted immediately,
their stomach content of fermented grain and hay froze with the animal.
That's the green part on the photo that Eric is cutting through.
This creates an odour that is just mind blowing once you start cutting.

Now, I am no princess,
I have seen my share of gore in my life,
I have pulled out rotting lambs from within ewes,
I have fished out  bloated drowned sheep from rivers,,
I have replaced prolapses,
treated maggot infested wounds.
I can handle most things..

The meat part is fine..
the smell of the stomach is what really gets you..
I mean me. 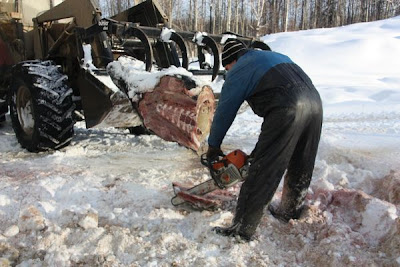 Once the bull has been reduced to slices,
we feed all that prime beef to the dogs
and some of the grain filled stomach contents goes to the chickens,
and that really gets them laying...

Part 2, will follow shortly....
that is if you want to continue on with this unsavoury topic,
After part 2, I promise, I will write a blog about nice things...