This is an update of some of the pups that have left us from previous litters and some write up from their owners:

Here is Heidi ( Snowy and Vuk) teaching puppy Skara (Katcha and Vuk) how to be a well behaved guardian. They are living together in BC and doing pretty good. 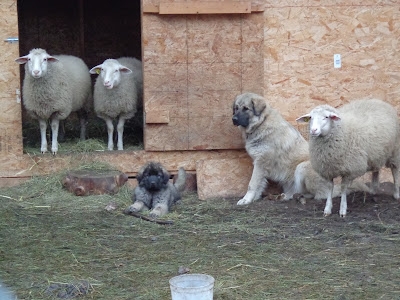 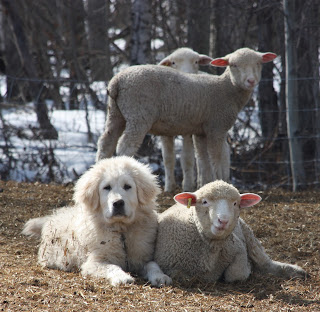 Well after our Dutch friends, Jacques amd Erika came and visited us,
they fell in love with Buddy.
They flew back to Canada a few weeks after that to collect  him.
He is now living in the Netherlands and has matured into a beautiful and very athletic Sarplaninac. 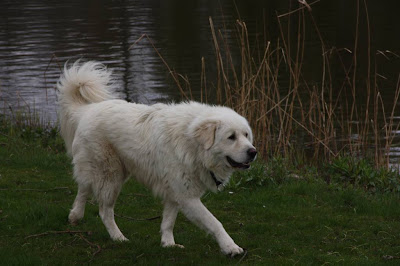 This is what the owners of George have to say,
Remember he was the jet set pup from Snowy and Vuk... see his story here
﻿
I just wanted to tell you again ... :)

what a really wonderful dog George is. I have never had a dog quite like him. He is very clever and is really well behaved. He never needs to be on a leash and is really protective and calm at the same time. I can call him off an animal or another dog very easily with one call. On halloween he sat on our porch and greeted all the kids gently and mostly just slept on the porch, not bothered by them or the noise. He follows my son Thoren around everywhere and has recently discovered stairs (he never went upstairs before?) ... Thoren has been having trouble sleeping (afraid of the dark stage) and so George has been coming upstairs and sleeps on his rug until he falls asleep and then George gets too hot and goes outside to his dog house. I could go on and on. He is just SO good. Definitely my most beloved dog ever even though he is VERY BIG and very furry. He is a smelly dog but other than I have not a single complaint :)

Everyone is wowed by how well behaved he is and smart. Really I know I am bragging but it is the truth! They are quite the breed..
Thanks again for the wonderful dog.

and Kitt was not quite done..
The amazing thing about George is that we have trained him only a little really. He went through about a month of wild puppyhood (after the initial chewing etc) but then he just totally calmed down and is very intuitive. His loyalty makes him easy to reward and easy to train. For me it was really great to introduce him to some of the neighbours I don't really know as well because he is such a big dog, etc. They were all really pleased with how gentle and friendly he was with kids etc. Anyway and his loyalty to Thoren is like from a story book. We laugh a lot because sometimes Thoren is just pushing George away... ' GEORGE.. give me some room!' Because often George just goes and stands next to him leaning against him. But of course George is twice his size. Anyway, great dog, we couldn't be happier

And with Zina things are also going well, here is a little update from Andrea
Her blog blurb  can be reread here


She is a good girl and goes out with the large flock (140 ewes) every day, together with the other guardian.
Zina does not like the horses though, she keeps them away from her sheep.
We had to tie a block on her for a bit as she tried to jump the fence, she can obviously jump quite high. (I remeber this, she was like Houdini when she was a pup!)
She keeps the neighbours cattle away from the sheep/ fence also.
We had one ewe unfortunately have an accident with a feeder, broke its neck, we didn't see it right away, as it was buried under hay, Zina would not let any sheep or the other dog get close, she never came to eat neither, she never touched or chewed on it herself though.
She is very protective.
At this time she still submits to the other dog, they are still quite good friends, good thing they are different colours otherwise I could never tell them apart as they both lay in a pile all cuddled up.
We are keeping a good eye on them during feeding,etc. , hopefully we can keep them from starting to fight, but so far so good.
Zina is already chasing coyotes, where the other girl stays more in the flock and barks a bunch.
I really like about Zina that she rarely ever barks, since the sheep are close to our bedroom that is much nicer, the only time she barks is if something bad is actually happening and most of the time she just goes to act rather than bark.
Well in short we love her  and are quite happy with her.

Unfortunatly, sometimes things don't turn out quite as planned.
This usually results in a joint effort on the part of the owner and me to try and find a more suitable home for the dog.
Rubic is still looking for a new farm and family to guard.
Here is her information

And Lily, a pup (9 months old, female) from Snowy and Vuk,
also needs a new start and a new chance.
For more information, you can contact me. 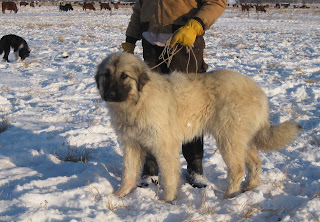