POCATELLO, Idaho -- Sheep tend to travel greater distances in the presence of a guard dog, likely because they're less concerned about predators, according to new research led by Idaho State University.
Bryson Webber, a graduate student in ISU's Geographic Information Science department who analyzed the data, said the study affirms the importance of guard dogs because stressed sheep tend to gain less weight.
Previous sheep dog studies have focused on mortality linked to predation; Webber is unaware of any other studies done about how dogs affect sheep behavior.
"We don't always have to remove predators," Webber said. "With this, hopefully we can show that the lifestyle guardian dogs simply being present improves the health of these animals. That equates to larger income for the ranchers."
The data was collected during a 16-day period in the spring of 2010. Oregon State University supplied GPS collars to record the elevation, location and velocity of the sheep every second. Webber plotted the data with mapping software to depict movement. Students with the ISU GIS club volunteered to observe the behavior of the sheep.
The U.S. Sheep Experiment Station in Dubois provided the livestock and the four expansive pastures utilized for the study.
The study tracked herds of sheep accustomed to predators. Half of the sheep were left alone and half were guarded. The guarded flocks were switched, and the process was repeated. Though the guarded flocks were more at ease to travel farther, Webber noticed no difference in speed.
The study's supervisor, ISU GIS Center director Keith Weber, said future research at the university will likely focus on analyzing cortisone levels and fecal matter to determine stress in sheep.
"The trend seems to be to move toward (guard dogs) now, especially as people are moving up against wolves that are moving in," Weber said.
Margaret Soulen Hinson, president of the American Sheep Industry Association, started increasing her use of guard dogs in 1996, when wolves began posing a threat to her animals. She now uses four dogs per band.
"In situations where you have lone wolves, the guard dogs can be pretty darned effective. A pack, they'll take out your guard dogs," she said.
Even with guard dogs, she's lost as many as 330 sheep to wolves in a single year.
"One of the ways they're the most effective is they truly alert the herders that wolves are in the area," Soulen Hinson said.
Webber hopes to submit a paper for peer review by the end of December. Suzanne Stone, wolf expert for the Northwest with Defenders of Wildlife, has requested a copy of the paper upon its release.
"We do a lot of work with the ranching community using nonlethal deterrents, including the use of guard dogs," Stone said.
Stone advised ranchers to use the best nonlethal predator control for a given situation, noting guard dogs can actually draw wolves to sheep during the spring when they're protecting their pups. 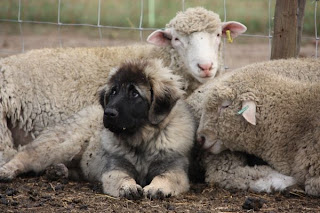 Now, I know that working stock with sheepdog's also has a calming effect on the stock, sheep do not get into a blind panic if they are approached by strange dogs as they are used to been worked by dogs.
That sheep feel more confident with trusty guardian dogs around is also clear.
This research just confirms this.
Yay!
Posted by Louise Liebenberg