The Alberta Sheep Breeders Association held their bi-annual sheep symposium this last weekend in Leduc.
About a year ago,
I was approached and asked if I would be one of their speakers for this year,
to talk all about raising guardian dogs.
I accepted...

So we flocked to the symposium,
leaving the ranch in our children's capable hands: 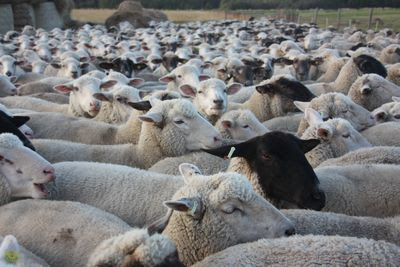 Once I was there,
standing in front of everyone,
I definitely wondered why I had accepted...
Not because the symposium was badly orgainised,
but because my nerves got the better of me.
I have done a fair amount of public speaking before, and I was well prepared.
After I was introduced I started:
sputtering,
my voice was breaking,
I stopped breathing (who said that breathing was easy?),
I was trembling...
Oh, dear, why oh why,
did I agree to do this?

Maybe, I was scared that the audience would throw rotten eggs and squishy tomatoes at me..
I don't know why, but I had a little mini nervous breakdown right at that moment.
It is not in my nature,
I am generally pretty calm...
Anyway, after about 15 minutes I calmed  my shaking down
and told my story.
I knew that I was pushed for time (perhaps that was also part of the reason I was a bit stressed?),
so I used up all the question and answer time.
Which, unfortunately, did not give other people (such as Carl or Eric) time to hekkel me or fire questions at me..
After my talk was done, I was completely inundated with questions and, recieved a lot of very positive responses  from many of the sheep producers.
Now, in hindsight, I wonder why I was so nervous to start with?
I have concluded that Alberta Sheep Producers are definitely a good bunch and I have nothing to fear when giving a public speech again.
Thanks guys for helping me through my "issues"!
It was great talking to you and I hope I helped in someway to make the raising of your guardian dogs
less of a challenge
or at the least, more understandable!
Posted by Louise Liebenberg