What happened to March?

Sometimes "things" just happen to me.
Like all of a sudden today is April?
What ever happened to March?
March was my recovery month, get ready for calving month and the start of spring.

Today, not even closely realising that March was over and April had arrived..
and with April sneaking up on me,
so did calving! 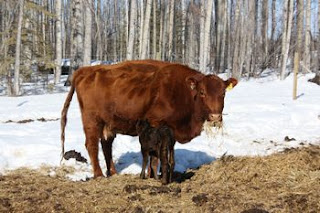 First, I find one calf and no momma cow in sight.
I search the herd and inspect every back end of each cow.
Nothing,  no tell tale sign of some slime, blood, a little bit of afterbirth still clinging to the tail of the cow. Nothing, and not one cow vaguely interested in the new baby.
Sigh.
So, while strolling around the pasture, I saw, far in the distance a red cow, alone.
Aah, she must be the mommy, I thought.
However, when I got to her she already had a baby!
So once again I surmised that perhaps she had twins.
Yes, that must be it. 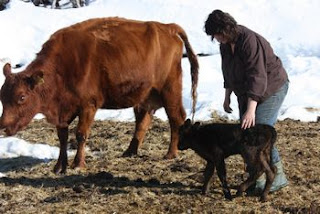 While going a bit closer to her  to check her newborn I saw, to my dismay,
a very small dead calf lying close to her.
Yes, I was right, she did have a twin, just not the twins I had expected.
I moved her to a smaller coral where she and her little baby could bond together. 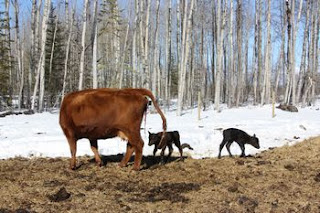 I gave the first calf some colostrum and hoped that his momma would materialise.
However, after a few hours nothing came to claim him.
So, without further ado, I collected him and took him over to momma with the one surviving twin. 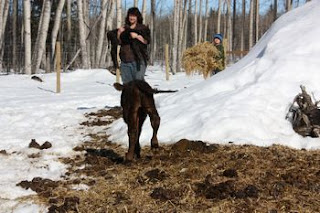 Boy, was he happy to see her and she seemed fairly pleased to see him again.
Could she have had triplets??
She is happy with her two little babies and I now know that April has arrived and with April comes calving! 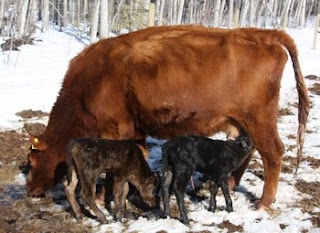 I am ready!
Posted by Louise Liebenberg