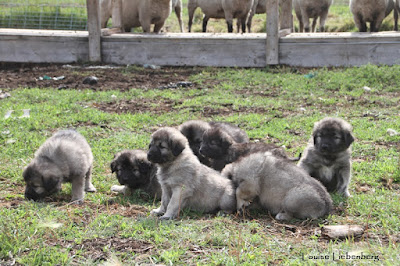 With the weather being nicer, the pups had some more outside time away from the barn.
They got to hang out with another older sarplaninac pup and some sheep.
The pups were more interested in exploring all the smells and wrestling with each other than hanging out with the sheep.
Finally, the sheep mooched over to inspect the new pups. 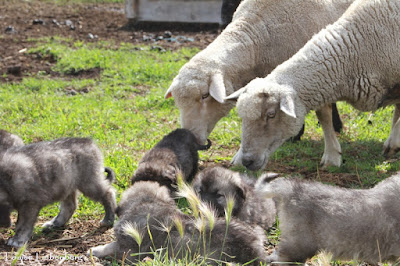 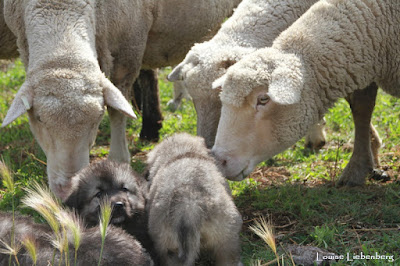 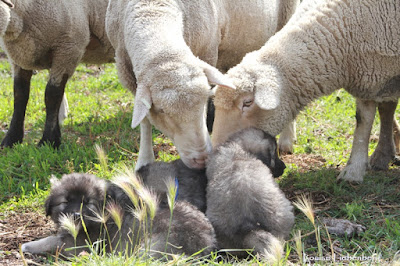 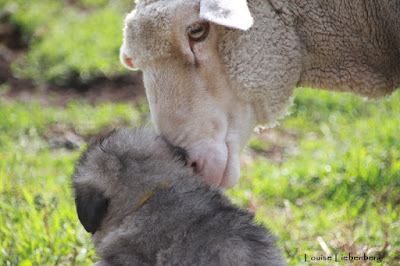 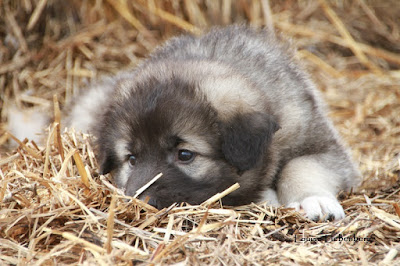 I see that Blue, Red and Green did not get as many photo's this time around.

Little Character descriptions of the pups so far, these do change almost daily where some pups are a little quieter and others are more outgoing.

Purple male is fairly bold, and adventurous.  Red is a little more independent and likes to sort of do his own thing, while the blue male is more quiet, watches what is happening and is perhaps a little shyer. The small male is people orientated and a friendly happy pup.

The females are more similar in their reactions. Yellow takes a little while to warm up to new situations but once everything looks okay she is happy to venture out. Green is perhaps the most caustious of the females, preferring to wait things out to see how the other pups fare when a new situation arises. Pink is fairly people shy, but is perhaps the most adventurous in exploring her surroundings. No Collar is somewhere between all the other pups. Also a little quieter in her approach, watching before being overly brave in new situations.

This is an interesting litter as they were all very quick to develop in their walking and movement. they were walking properly sooner than most litters. They left their whelping box sooner and started to eat and react faster than other pups we have had. They are also more independent in general. The are however, quieter and a little more cautious in their approach to new things.  They are not a rowdy litter of pups and also are not really vocal in their playing and wrestling with each other.

It is going to be a tough decision which pup to keep back.
Posted by Louise Liebenberg