Just let me state upfront that:
1. I am not a scientist, biologist or zoologist
2. What I am about to write are my thoughts and opinions,
and these may be wrong!

The relationship between predators and prey is fragile one and one perhaps not yet fully understood.
The ecology of fear, and the trophic cascade effect of predators on both the prey and their ecosystem are relatively fresh ideas, these are fascinating reads!
( The Wolfstooth, Cristina Eisenberg amongst others..)

Not every interaction between predators and prey results in predation.

Predators need however, to stay in fairly close contact with their prey,
to ensure a constant supply of food.

You will see lions drinking side by side with zebra, at a pool in Africa,
or cheetahs walking past herds,
where the prey is wary, but not flighty.

Many times, predators will just be passing through,
observing
and resting close to the prey animal. 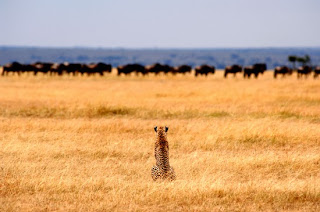 This all gets me thinking about the relationship between the coyotes and our sheep.

A few months back I got a call from a sheep rancher in central Alberta.
He runs a fairly large herd and has an older Great Pyrenees dog in with his stock
He was concerned about what he was observing.
The coyotes would be coming within about 50 m of the flock
and the guardian dog did not seem to respond to this anymore.
Sure, if the coyotes came in closer the dog would get up and bark.
According to the owner, the dog was just not so into chasing off the coyotes.

Now, in my opinion there are a number of things going on here.
1.Coyotes are the masters of observation, they have all day to watch and learn what we are doing, they learn our routines, our patterns and even the habits of our stock and guardian dogs.
In all likely hood these coyotes are just checking out what is  going on.
They are not in predatory mode (yet)
and just scoping out the situation.
2. This dog was older and alone. ( I will return to this point a little later)
3. The coyotes are probably in the process of habituating both the dog and the stock to their presence.


One of the biggest errors I see with sheep ranchers is that they
do not have enough guardian dogs out doing the rounds.


One dog is never enough, the expectation that one dog can protect the livestock is simply not feasible.
In time the dog will become exhausted and will even become a target for predators.
A dog alone has no back up, no rest and will lose confidence if predators repeatedly test the dog.
It is the proverbial "sitting duck".

In some instances two dogs may suffice, depending on the number of livestock, terrain, predator load and other measures implemented to discourage predation.

Running a "pack" of dogs has a whole number of advantages:
-more guardian potential for your flock
-young dogs are trained and raised within the safety of the pack
-the dogs create their own territory and will drive off intruders
-more dogs will divide the jobs of perimeter patrol and close up protection
-they give the predators less chance to "habituate"
-more fresh dogs, the dogs do not get played out as easily
-they give each other  back up

It also has its disadvantages ( feed costs, naughty behaviour, roaming) however,
the advantages of having more dogs, far outweighs the negatives.
It is a number game, to have sufficient protection for your flock, you need enough dogs.
The most efficient pack is one that is built up of various ages, similarly to a wild canid pack.
You have a few older adults, some younger adults, a teenager or two and an up and coming pup.

The breed of guardian dog also has an impact on how the dogs react and behave,
however that discussion will need to wait for another blog sometime.

So, on to our situation:
I have seen this  ( habituationg) behaviour in the local coyotes here.


They regularly check out what we are doing, if we move the stock, change our patterns the coyotes come and see what has happened and what has changed.
A few weeks back  I noticed a coyote coming around all times of day, staying way beyond the fence, but checking things out.
(We only had two dogs in the flock at that stage).
Not long after that, I found the same coyote laying on a bale watching what was going on. 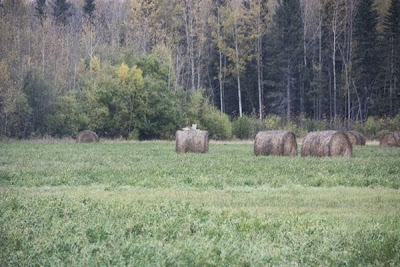 A few days later, the same coyote was laying on a bale with the sheep.
There was a progression in the coyote's behaviour and his boldness.
I blogged about it  HERE and what our response was to this increased boldness. 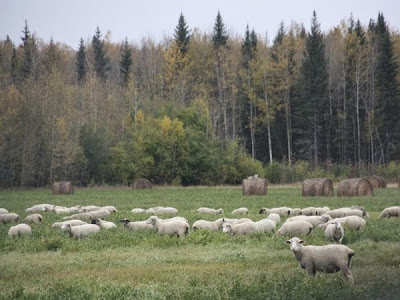 I needed to up the dog numbers,
and thankfully I have some "spares" kicking around.

Last weekend, things came to a head, with the dogs killing a coyote in the night corral of the ewes.

Due to the large amounts of snow,
we have now moved the ewes into another pasture,
this is going to be the 2013/14 winter corral.

This week, we have seen more coyote activity again.
A large male coyote ( I am assuming the mate of the female) has been coming around, checking things out,
patrolling the fence line and laying on the bales at the cows.

I know that wolves will often leave a killed coyote on a well used trail as a possible warning to other coyotes,
so, I decided to leave the dead coyote on a well used trail in the bush hoping that this too will warn the other coyote to keep his distance.
We will observe and watch
and if needs be we will add in another dog or two to ensure adequet protection and maximise discouragement.

Every morning we let the sheep out of the corral so that they can look and dig for some grass
and can nibble on some bales.
Leading the way is guardian dog VUK.
He is the black dot upfront.

He goes ahead and the ewes will follow him out.
This behaviour of the dogs going ahead and "sweeping" an area clean is what we like to see.
They will move any predators out of the area where the sheep are moving into.

However, it is our responsibility to do everything in our power to reduce the chance of conflict,
and discourage predators from hanging around our stock.
Having enough dogs to be able to protect the flock,
(and to ensure the dogs safety)
is one of the most important management factors we implement on our ranch.