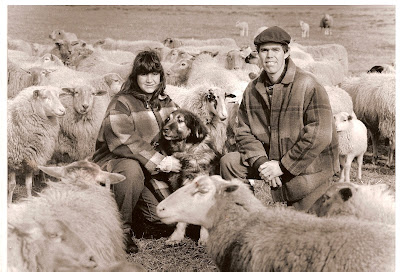 I was 24, and was shepherding sheep in an area called The Maashorst in the Netherlands.
We shepherded our sheep in a nature reserve doing mostly weed and grass control in heather areas.
When I say "Shepherd,"
I mean that we would take our flock out grazing for
7-9 hours a day, watching them eat.
We guided what they ate and when they ate by taking them to areas where certain weeds needed to be overgrazed, or by lightly grazing the heather areas.
We used our border collies to keep the flock where we needed them and did everything on foot. 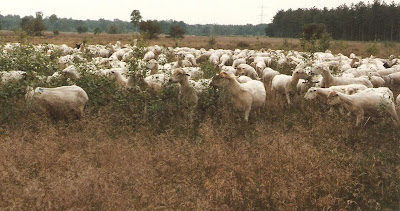 The Netherlands do not have any predators larger than a fox.
Our biggest problem was people who took their beloved dog for a walk and would then let him
"play" with the sheep.
This often resulted in ears being ripped off, udders slashed, broken legs and other horrendous injuries, and us having to euthanize the poor sheep.

Now, Dutch law is different from Canadian law.
You cannot just go out and shoot the livestock killing dog.
No, you would first have to catch the dog ( most times impossible), then prove that he was killing or maiming your stock, you would then hand him back to the owner and hope that their insurance would pay for the damage.

Most of the time, this did not happen,
it  become a large cost to us and our small grazing company.
Not only were the monetary loses a blow,
but you also had to go through the heart break of seeing your sheep mauled and being powerless to do something about it.

This is when we decided to look into livestock guardian dogs.
We read what we could find.
Remember this was the before the internet got going.
So research involved breed books, letter writting and other lengthy methods.
The most influential piece of (printed paper) research and information that I could acquire was the research done by the Ray and Lorna Coppinger with the Hampshire college.
In this paper ( I still have it!) they discussed raising, training, problems and looked at various breeds.

After pouring over all this information we decided to try and find a Sharplaninatz (or Charplaninatz or Sarplaninac or Yugoslavian Shepherd Dog...). for our flock.
Unfortunatly, our search (early 1990's) coincided with the disintegration of Yugoslavia,
and the war in the Balkans was raging.

Finding a sarplaninac  in its country of origin was just not a possibility at that time.
We had been in contact with some people that had acquired a few sarplaninac from Yugoslavia before the war.
These people ( Marjolein and Karl Laarhuis), were instrumental in helping us find a sarplaninac.
We evenentually managed in 1994 to get our first Sarplaninac.
She was no cute, cuddly pup.
This was an adult dog who needed to be re homed due to health issues of the owners.
We drove to Belgium to visit with the people and to look at the dog.
We were slightly intimidated when we first saw their dogs,
especially once we realised that the fencing was in a poor state...

We had some wine, talked dogs and were introduced to Chantal.
As the Belgium's would say : "Chantaleke", ( little Chantal).
We knew that she was registered but had no idea how old she was.
She was somewhere between 5-7 years old we estimated.
She was not huge, however she commanded respect.
And, we showed her the utmost respect.

Now, Chantal came to us and we were totally clueless about sheep guardian dogs.
Yes, we knew about  border collies,
but this did not prepare us for a sarplaninac,
nor  livestock guardian,
let alone both all at once!

So, in our ignorance we dumped poor Chantaleke in amongst our terrified flock.
She had never been  with any livestock before.
She had never, in her life even seen a sheep before, she met us.
She was first a show dog, then bred a litter or two and finally a home guardian.

Now, all of a sudden we wanted her to be "bonded" with the stock and do her job.
Our sheep thought we had gone mad putting a wolf in the pen with them!
Lucky, for us, she settled right in and just started doing her job.
No fuss, no issues, no drama.
The sheep calmed down and grew accoustomed to having her around.

We thought having a LGD was a breeze in comparison to the border collies.
I KNOW now that we got lucky.
We had hit the proverbial jackpot, with her.
We just did not appreciate it enough at that moment.
In hindsight, I think we should have erected a monument in honor of her.

She turned out to be an awesome dog.
She is the reason why we now have 8 of them.
Our experiences with her, sold us on the breed.

I will in, a few more blogs share some more stories and anecdotes about her.
perhaps this is my way to pay tribute to her. 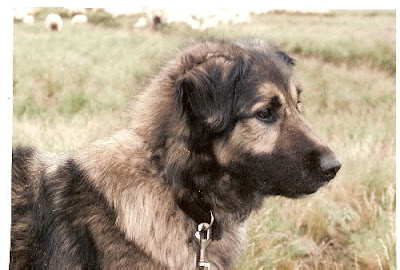