We have been really very busy.
things got a little set back with a huge pre-winter dump of snow..
and then came rain and now we have mud!
Normal work such as hauling bales, jobs, kids, council meetings, presentations and life in general,
also got in the way of blogging and  making puppy pictures. 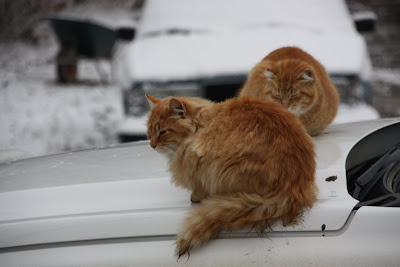 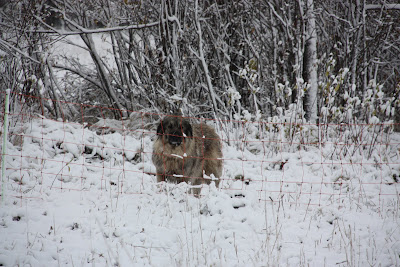 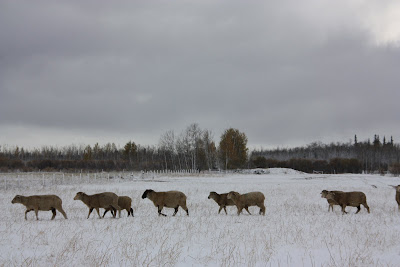 Even the sheep were surprised at the snow.

Yesterday was the big day.. for Ace and the puppies.
Ace, went from being a stud to being a dud...
just joking.
He is now going to be a great gelding... 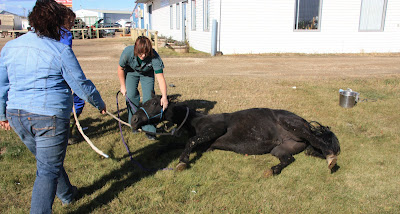 It was a battle initially,
as he seemed to really like the ketamine high and would not give in to his sleepiness.
But, the drugs won and down and out he went. 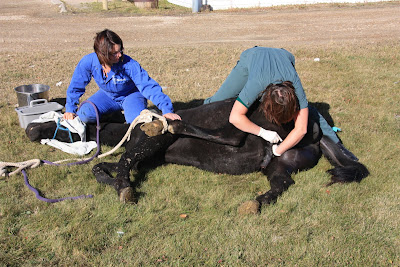 When he woke up he was a new man!

For the 12 pups it was also an exciting day.
First they got loaded into a stock trailer together,
went for a long drive.
At the destination they were loved on, petted and vetted.
All have some fancy marks on their paws now, so we knew who was done and had not been looked at yet.
They have been vaccinated, wormed, micro chipped now. 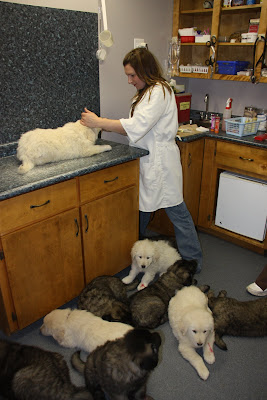 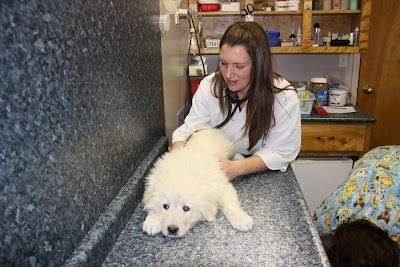 Two of the little white boys each had a small navel hernia closed,
just to be sure that this would not have any effect on them later.
So, they are all as good as new now.

The fattest pup was Akuma akaVuk aka Lobo aka
yep you guessed it...
"Bear"
weighed in at  9.5 kg or  close to 21 pounds.
The lightest pup was 6.8 kg, this is Mali aka Grouchy and she is our pup from Katcha's litter.

The pups will be leaving us as of end of next week.
Some will be staying here so we will not have to suffer through too much "empty nest syndrome"