We have had a very rough weekend to say the least.
It was a weekend plagued with a lot of expensive mechanical problems and then the loss of one of our sweetest dogs, Snowy. 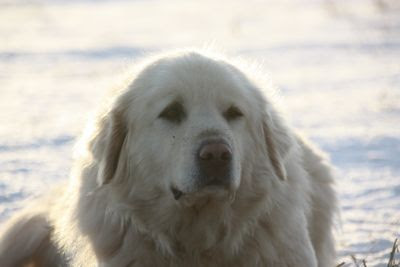 Two months ago our Snowy was in season. I diligently kept her away from the males. On day fourteen she got into a fence fight with Alaska, who promptly pulled her through the page wire into the area where Alaska (bitch), Beli and Tosoxs (neutered) where. Not only did Snowy get beat up by Alaska, she also got bred by Beli. I was hoping of course that she would not “catch” but this was not the case. We could see her growing and when she was due to whelp we brought her in. She was very heavy and so when she stopped eating a few days ago I assumed she was getting close to having her pups. On Friday night she started to whelp.
The first pup was born at 3am. At 8am she still had not had any more pups. Then a dead pup came out followed by two live ones. Her labour stalled. A few hours later another few pups where born and then she stalled again. With advice from the vet we injected her oxytocin to get her contractions going but this did not have the desired result.
The decision was made to do an emergency c- section. When the vet opened her up she still had a dead pup and one living pup. The total 7 live pups and 2 dead pups. The live pups where a bit slow to get up and go and where on the light side. During the c- section the vet became concerned as Snowy’ s uterus was filled with large amounts of blood. The tissues where fluid filled and so the decision was made to spay her as her uterus did not look healthy.
After two hours in surgery the vet placed the last suture when Snowy stopped breathing and her heart stopped. She died on the table. I was devastated and could not believe what had just happened.
So, with the heart break of losing our angelic princess (Read about her HERE) we where also left to raise 7 white little Sarplaninac pups by hand.
The kids have taken it on them to help with the every 3 hours feeding regime of the pups. The pups are growing, seem satisfied and content. We understand that the chances of survival for some of these pups will be low; however we committed to try and make this work.
The pups now live in a cardboard box in the house so that we can keep the feeding going. We have 4 boys and 3 girls, all white.
Updates will follow. 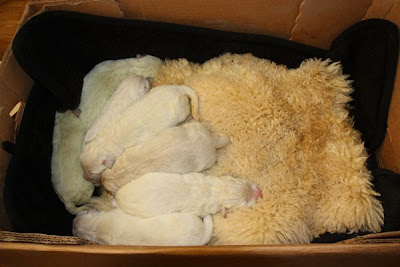 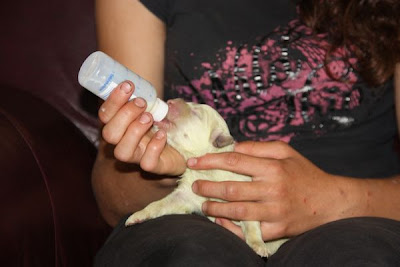