Failure or Success in LGD

Ray Coppinger talks about the three key factors that makes a Livestock Guardian Dog (LGD) successful or not. These three elements are the cornerstone traits of LGD; trustworthiness, attentiveness and protectiveness. When livestock guardian dogs fail, despite; good breeding, an experienced shepherd and great selection, then it can normally be attributed to problems with either a lack of attentiveness, trustworthiness and, or protectiveness. These three traits are what differentiate LGD from other farm dog breeds, and these parameters define how well the dog does its job. To this day some researchers still utilise Coppinger’s system of scoring the dogs on effectiveness based on these three parameters.
When accessing LGD, most issues that arise can be attributed to a lack of these traits. Not staying with stock, roaming, ignoring predators, non-responsive behaviour when sheep are stressed, little social interaction towards the livestock, lack of nurturing behaviour or even fearfulness, can all be attributed to a lack of attentiveness by the LGD towards the livestock.
When dogs show a lack of trustworthiness problems such as harassing the livestock, play behaviour, predatory behaviour, rough, wool pulling, ear chewing, aggressiveness, herding, sexual mounting and showing forceful dominance towards the livestock are manifested.
When the dog lacks the protectiveness to guard against predators, these dogs will often not engage predators,  “allow” predators to predate on the livestock, form social/breeding bonds with predators, low response to predators such as barking when coyotes yip, fear or predators pushing the LGD out of an area. 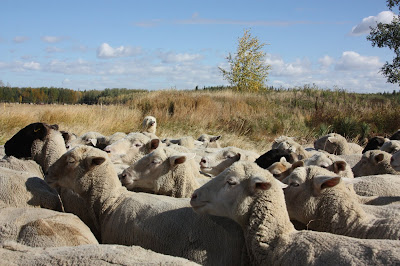 The presence of an LGD close to the flock works as a deterrent to predators. Without a dog close by the flock would be more vulnerable to predation.
These three behavioural traits need to be balanced; a dog might be trustworthy; because it is totally inattentive towards the livestock. This is often the case with the “all round” farm dog. He is trustworthy in that he will not attack the sheep or chickens, but that trait alone does not make him an LGD. Folks, that say that there Labrador is a great livestock guardian dog are only thinking about the trustworthiness trait and forget that the dog also needs to be attentive of the sheep’s behaviour and be protective enough to stand up and engage a predator.
An LGD can be untrustworthy; because it is disruptively attentive. This dog might be too involved, stealing lambs from the ewes, or always racing through the flock to bark at a leaf falling off a branch in the forest. There response can have a negative effect on the livestock who will not be able to settle down and graze. An untrustworthy dog will often not be trusted around the livestock as it will be wool pulling, chewing ears, harassing, chasing, biting and harming the livestock.
Some dogs might show a lack of protectiveness, despite been trustworthy, not because of lack of aggression toward potential predators, but because of their inattentiveness toward the sheep. This dog simply does not care what happens to the livestock. He does not regard the sheep as his, to be protective over. He might be a fantastic “guard dog” but he is still not a livestock guardian. A wolfhound will run down a coyote or a wolf, but that fact alone, does not make him an LGD, he will still lack the trustworthiness and the attentiveness to be successful at this job.
Failure is a very subjective term, what counts as a failure for one shepherd might not be regarded as a failure by another. Everyone knows that not every LGD is successful at its job, some are failures. These failures can be “man made” and some are inherent in the dog.  In Georgia, Robin Rigg conducted some research on LGD, and they found that owners rated their dogs as “good” (61%) or “partially good” (22%) which leaves about 17% as being “not good”. Does this translate into 17% of those LGD being failures? Everyone knows that not every LGD is cut out for the job. Failing in their job is “normal” within any working breed of dog. Not every border collie is equally able to work livestock, not every retriever has a soft mouth and not every rat terrier is an expert rat killer
The mandate for a successful livestock guardian dog is two-fold; firstly, it needs to protect the livestock from depredation and secondly, the dog should not kill/harm the livestock it is supposed to protect.  This seems straight, clear, black and white with very little gray area in between. If the dog does not protect the livestock or kills the stock, then it is a failure, right?

What accounts for failure? The owners who rated their dogs as “not good” responded that the dogs showed a lack of attentiveness towards the livestock, the dog’s fear of wolves, poor breeding and a failure to train them as pups.  Perhaps, failure is not absolute, 22% of the respondents on that study still found their dogs to be “partially good” despite them being less attentive, not protective enough or they were attentive, but fearful of wolves when compared to the “good dogs”.

Failure (or success) is possibly best measured on a scale of effectiveness. If the dog is good, it is effective in its duties as a LGD, partially good is that it is somewhat effective and failure is when it is never effective or a liability to the flock.
A dog that roams may be 100% ineffective if it is not with the sheep and partially effective when it is with the sheep.   A dog that is fearful of wolves may be partially effective in supporting other dogs within the pack against a predatory attack. It is well known that just the presence of having the LGD close to the flock, has a deterring effect on predators, so that alone, will make the dogs somewhat effective.

Sometimes circumstances can change the perception of effectiveness of the dog,  LGD that never stays with its band, could be a very effective guardian dog in a pastured and fenced system, a dog who is fearful of large predators might work very well in a pack situation with multiple other dogs or in a situation where the predator load is light and only dealing with smaller predators. I have known dogs who were not reliable with newborn lambs but were phenomenal guardians once the lambs were a little older.  The owner understood the value of this dog despite its untrustworthiness around newborn stock and chose to remove this dog from lambing animals and utilise him where he was very effective. It is often the willingness of the shepherd to work with the dog, that determines if the dog is a failure or not.
I believe that when we evaluate our LGD on their effectiveness, much of what we perceive as “good” is very much based on our own biases and circumstances.  It is interesting to note that Rigg found that the owners of “pure bred” dogs were more satisfied with the performance of their dogs when compared to those who had mixed breeds,  despite no significant differences between livestock losses or how the owners rated their dogs.

One thing is clear, there are no absolutes when it comes to LGD. The degree of effectiveness of an LGD is correlated to its attentiveness towards the livestock, aggression towards predators and its trustworthiness. Dogs who were regarded as “partially good” where still somewhat effective in their roles. Absolutely failure, is primarily the result of a lack of trustworthiness.