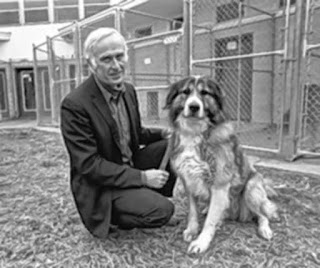 Anyone who raised sheep in the late 1970’s and early 80’s will have probably have heard of Raymond Coppinger and his large-scale research, spanning a decade  on livestock guardian dogs. I think it is appropriate to give a nod to this man, who passed away in August 2017.  Raymond Coppinger was first a dog-man, and then got a Ph.D in Biology.  He started off with his feet firmly placed on the skis of a sled dog team. In 1976, he and his wife Lorna started the Livestock Guardian Dog Project at the Hampshire College.
In the late 1970’s LGDs was virtually unknown in the USA, this was a totally new concept of having dogs live with livestock to protect them from predators. At that time, the USA had been virtually wolf free for many decades, and ranchers were not accustomed to having to really protect their stock from large predators, coyotes did however wreck havoc on sheep flocks and much of the research was based on finding solutions to combat coyote predation.

The first study conducted in the USA on LGDs was from S Linhart, R Sterner, T Carrigan and D Henne in 1977. Following this, in 1979 two other independent projects began to follow up the Linhart et al results. Ray Coppinger and his wife Lorna established the Livestock Dog Project (LDP) in Amherst, Massachusetts, and at about the same time, Dr. Norm Gates acquired several Hungarian Komondors for a long-term study of livestock guardian dogs at the U.S. Sheep Experiment Station(USSES) at Dubois, Idaho. 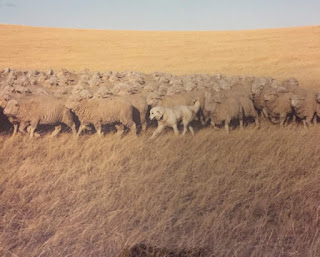 No one had done any large-scale research into LGD at that time, and certainly to date, no one, other than Coppinger, has collected data from over 1000 dogs over a 10-year span. This research is still the single largest, long term study conducted on LGD anywhere in the world.  Initially, the Coppingers did a tour of ranches utilising LGD in the USA, and then they traveled to Europe and Turkey over a period of 3 months to observe and where possible, purchase pups of various breeds. He later purchased 10 puppies of three breeds, they were Maremma from Italy, Shar Planinatz (Sarplaninac) from Former Yugoslavia, and Anatolian dogs from Turkey.  At this time, it was extremely difficult to get pups out of Yugoslavia, stories of pups being transported down from the high mountains on donkeys, (personal communication) to be sent over to the USA, illustrates some of the challenges these dogs and the researchers faced. Some other breeds were donated to this project and were tested on a smaller scale.

The goals outlined in his study included the placement of dogs with producers and track their development, behaviour, and effectiveness in predator control, to  clarify “mechanisms of both successful and unsuccessful behavior by means of controlled studies” and finally to communicate these results back to various interested parties. The dogs were leased to producers so that the Hampshire College could still have access to these dogs for breeding or other research. Producers volunteered for this project and annually had to fill out a comprehensive report regarding the dogs, their behaviour and effectiveness.  News of the success of these dogs spread to other producers and the program grew to a point where over 1000 dogs were placed with livestock producers in 37 States. A secondary study led my Jay Lorenz, together with the Coppingers was initiated in Oregon.

It was significant to note that this and some of the other studies, reported a reduction in predation when LGD were utilised on sheep flocks. These positive reports spurred the demand for more dogs and more sheep producers stepped into using LGD.

Coppinger studied both purebred and crossbred dogs. They also did heavy linebreeding to see what the effects would be on the dogs, to “determine if deleterious genes were present, and crossbred to test genetic or behavioral concordances, and enhancement or depression of structural and behavioral characteristics”. Now, 40 years later, one can criticize this work as being unethical regarding breeding practices, but at that time the breeding and crossbreeding of LGDs did provided pups to a growing group of producers needing and wanting these LGD,  and it provided additional  data on the effects of this breeding and breeds for their research. Having these offspring “out working” and getting feedback on them is what drove this study forward.

Some of the behaviours that Coppinger studied was the relationship between trustworthiness, attentiveness, and protectiveness of the dogs to their livestock. Today, some organizations still utilise these parameters to gauge how LGD are doing.  The relationships between these behaviours certainly play a significant role in the effectiveness of the LGD. I believe these three parameters are still relevant in assessing LGD behaviour today.

Coppinger is often blamed for promoting the “hands off” style of raising LGD. Many people now vilify him for this, as they feel this is one of the biggest myths he perpetuated. Reading the publications, I did not find anywhere, that it advocated that the pup should be reared with no human contact at all. Somehow, somewhere the message become distorted to the point that no handling became the norm. What was written by the Coppinger was that “minimal human contact” was recommended to allow the pup to form the sheep-dog bond. In the old 1990’s USDA ( with Jeff Green and partners) nowhere does it say that LGD should not be handled at all. (https://pubs.nal.usda.gov/sites/pubs.nal.usda.gov/files/LivestockGuardingDogs.pdf). In fact, they encourage some basic obedience training during the raising phase.
Coppinger did state that some dog/human interaction was required and that some petting was appropriate. (http://ir.library.oregonstate.edu/xmlui/bitstream/handle/1957/18914/ec1238.pdf). In all the early studies, it stressed the importance of early exposure to sheep in developing successful guardian dogs (Green and Woodruff 1983x; Coppinger and Coppinger 1980; 1982).

It is interesting to note that Coppinger did find, after 10 years of studies on LGD, that success of the dogs could be attributed to (in part) to the amount of time a producer spent with his dogs. The dogs who were ineffective in the USA were “those where sheep scattered widely over a great area and never flocked, or where producers did not spend more than a minimal amount of time with the flock. The essential difference between management of dogs in this country (mainly farm operations) and in Europe (mainly range operations) tends to be the amount of time owner operators spend with their stock. “ 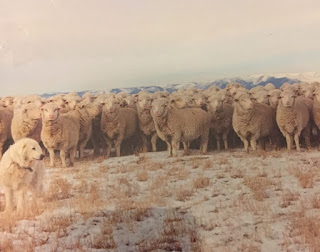 I personally question the blame laid at the feet of Coppinger for advocating for hands-off, feral dogs. His research has never advocated for this form of raising. I believe this myth was a general belief that existed at that time, were all working dogs (hunting, retrieving, herding, terriers etc), were presumed to be better working dogs if they were not petted and treated like house pets. This belief, combined with the need for LGD to bond to their sheep, morphed into this idea that LGD should not be handled and preferably left feral with the stock.

I think it is important to view the research done by the Coppingers in the time frame, (40 years ago) it was conducted. At that time, his work was ground breaking and it provided real science, a lot of data and a solution to predation issues for ranchers. For many ranchers, this was research/science that directly benefited them, and indirectly, the promotion of LGD allowed for more non-lethal predator control.  His work and research is still cited in most new research articles today and formed a basis from which other research has been conducted. It was pioneering to say the least.

With 40 years more of LGD use since the Hampshire College LGD Project started, there are new insights on how we raise and train our LGD. Times change, the sheep industry has changed and how we view dogs has changed. We do not have to agree with all his research, but I do think it is only right to tip our hats to a man that made LGD use in the USA and Canada accessible. Even Ray, over the years amended and corrected certain statements he originally made.  Having some misconceptions back then or a change in perceptions today, does not invalidate all the work he did.

If it was not for that initial study of Coppinger, I would never have gotten to know the Shar Planinatz breed, and for that, I am grateful. To this day, I still read his research and I see new things or another aspect catches my attention. I have spoken with Coppinger numerous times, primarily about LGD and cattle, it was always interesting to share conversations and insights with him. People change, people learn and over the years Coppinger had some different reflections on his initial work. I do not believe we can blame Coppinger for all that is wrong with LGD now, and I am sure he has had a very big impact on keeping sheep safe in the USA. I believe his work and introduction of LGD to a broader sheep producing audience paved the way for better livestock, and indirectly, wildlife management today.
I would like to conclude this article on Coppinger and his Livestock Guardian Dog Project with his own words:
“Guarding dogs can reduce predation on farms and ranches by 60 to 70% or more. On an individual basis, reduction of losses to predators can be spectacular. For producers in areas where lethal controls are inappropriate, guarding dogs made staying in business possible. Problems within the system are solvable, given long-term recordkeeping and expert attention. We focus on the problems, but there have been far more successes than problems over the past 10 years. This management system has attracted increasing attention and use not only because of its effectiveness but because producers feel they can take charge of what happens on their farms or ranches. Dogs provide a good alternative to environmental liabilities of lethal control methods. Costs should decrease and effectiveness increase as more growers, extension agents, wildlife damage control personnel, and breeders become familiar with the system.”

Coppinger has written and number of books regarding dogs in general.

"Dogs: A Startling New Understanding of Canine Origin, Behavior & Evolution" from May 27, 2001, by Raymond Coppinger and Lorna Coppinger.

“How Dogs Work” from October 22, 2015 by Raymond Coppinger and , Mark Feinstein.
“Genetics and the Behavior of Domestic Animals” from  April 22, 2013, by Raymond Coppinger, Kathryn Lord, Lorna Coppinger
And Ray Coppingers most favorite book; “Fishing Dogs: A Guide to the History, Talents, and Training of the Baildale, the Flounderhounder, the Angler Dog, and Sundry Other Breeds of Aquatic Dogs (Canis piscatorius) in 1996 by, Raymond Coppinger.

Photo 2 and 3: Photo of Noreen Lehfeldt, one of the producers who received a dog from the livestock Guardian Dog Project. This is Mara a Maremma sheepdog in 1985, one of the Coppinger project dogs given to Noreen Lehfeldt.
Posted by Louise Liebenberg