Importing of the Brabant horses 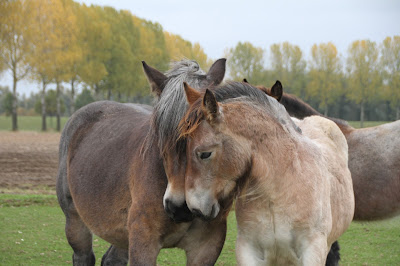 In 1996, there was promotional, beer wagon train, from the City of Antwerp in Belgium to Amsterdam in the Netherlands. The trip constituted various teams of Brabant horses pulling primarily beer wagons and kegs.
This was a promotional tour organised by the world-famous PALM beer brewery, whose symbol is the sorrel coloured brabant horses.
In that wagon train, pulling Palm beer kegs was a black team of Brabant horses, called Max and Carmen.

Little did we know then, that we would end up becoming the owners of that team. Initially Max, the big trusty gelding came to us. He was used mostly for doing wagon rides in the nature area we lived in. This gelding was the epitome of cool headed, and easy going. Despite Eric and our friend Henry being clueless in how to harness up correctly, he stilled pulled the wagon despite the harness being upside down and inside out.
Eric and Henry got the harnessing figured out and the decision was made to add another horse, we purchased the mare Carmen, who stood next to Max during the PALM tour.  Carmen had a little more fire in her soul, and although we bought her as broke, we soon realized that she was maybe Max’s partner in the trip, but it was more for the company than for the work she did. The lesson we learnt was never presume a horse is broke...

She taught Eric and Henry, how to really work with a horse.
She went on to become a fantastic horse that was used for wagon rides, normal riding, she would plow and do land work and she pulled felled trees out of the bush.
This mare was more than we could ever ask for, and embedded in us,  a love for this draft breed.  We had various other Brabants in those years, but sold them all, when we decided to immigrate to Canada in 2008.
Initially, we thought of importing a few with us, but with the huge cost involved we decided against that, unsure if their would be any market here in Canada for them to warrant the expense to import them. 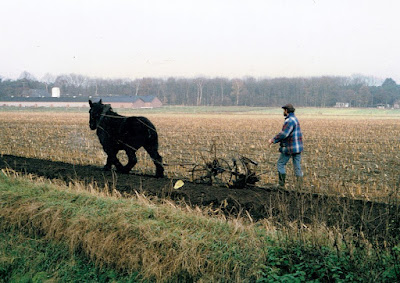 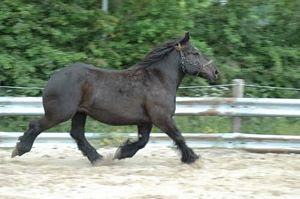 Since, 2008 we have been building up our ranch, we invested in the farm, in cattle and sheep and a barn. Our barn burnt down last year and we had a big set back in our ambitions for the ranch.
Another year of building started.
Eric had mentioned several times that he really wanted to get back into the draft horses. He decided to buy an “American Belgium”, so Sugar came to live on our ranch. Although a nice mare, Eric still hankered for a “real” Brabant again (we used to live in the province of Brabant, NL, so some nostalgia comes into play as well).
We decided to purchase a mare in Missouri, so Missy would make the trek up to Canada.
We agreed to lease a stud for three years, and so Expo joined Missy in the drive back to Canada.
This little group would be the start up,
back into the world of  Brabant horses.

Following this, we purchased Jane and Lucy, two more American Belgium Horses. All, nice mares who would produce half Brabant foals.

Last year, Eric made the decision that he needed to kick start his purebred breeding program and the only way to ensure quality horses would be to import them himself.
He reached out to our old contacts and friends in the Netherlands to be on the look out for some good quality foals. In, October 2016 we traveled back to the Netherlands and Belgium to look at and select wean-lings to import to Canada.

We made the decision to travel around and look at all the available foals we could find that fit our criteria, before making any decisions on which we would purchase. We wanted to see the mothers of the foals as that would give us an indication on how the babies might turn out. We knew all the studs were proven studs, and were recognized as breeding studs by the pedigree organizations. 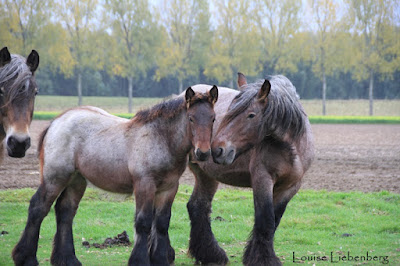 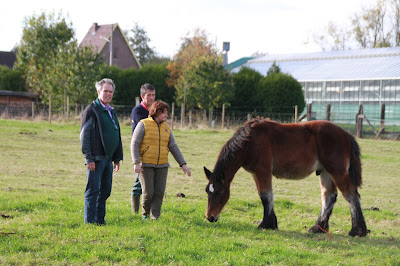 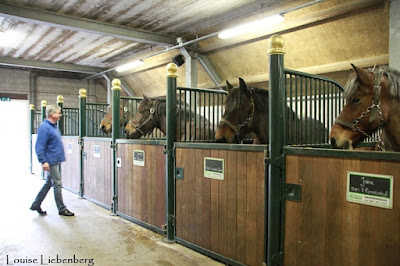 We saw some excellent quality foals at various breeders. Initially, we wanted to find a blue roan stud colt for ourselves, but became enamored with two stunning bay colts. The decision was made that these two colts, out of different studs would be part of the group of 4 that would come to Canada. We saw some really nice foals, went to watch some seeding, and spent some time looking at yearlings and two year old’s in various places, mostly young stud horses who would be brought to the shows to be evaluated for breeding soundness. 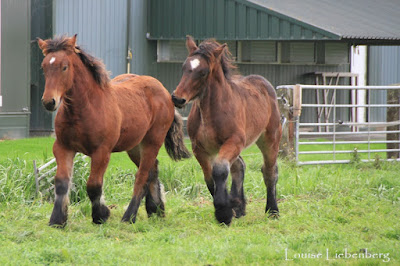 We spent a few days in Belgium looking at some foals there. The biggest issue in Belgium was that most of the foals had their tails cropped. Although illegal, it still happens. We would not have considered a cropped foal, so that left us with a smaller selection. We missed some correctness in some of the babies we saw and were not as “taken” with the foals we got to see. We soon made the decision to return and look at the horses in the Netherlands. 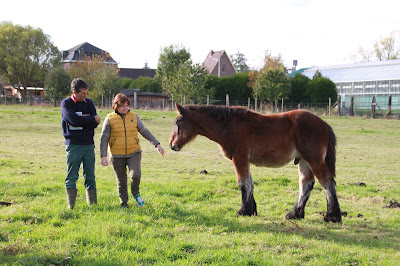 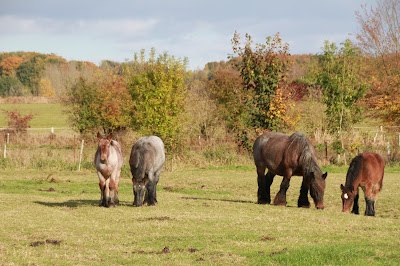 While travelling around we made a point of visiting with the registry folks, and Eric drove up to the quarantine facility and shipping company to discuss the whole process.
We were initially told that we could import 4 on a pallet, but were later told that 5 foals would be fine to.
So, we decided to look for a fifth weanling to join the crew.

We also spent some time at a draft horse day, 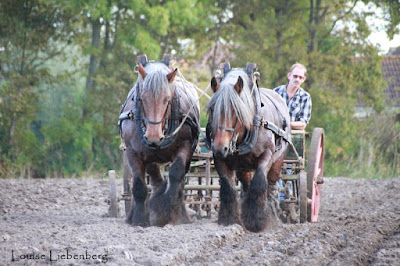 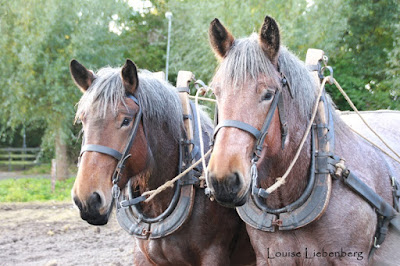 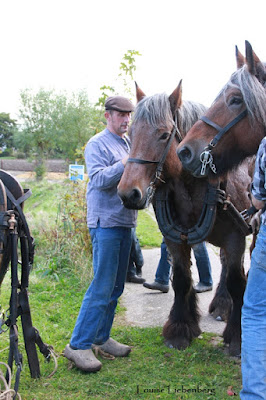 And, we helped to collect some young studs off an island for the winter. 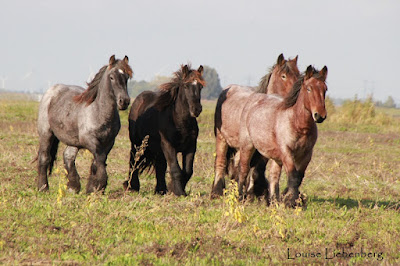 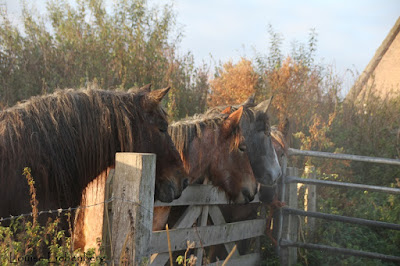 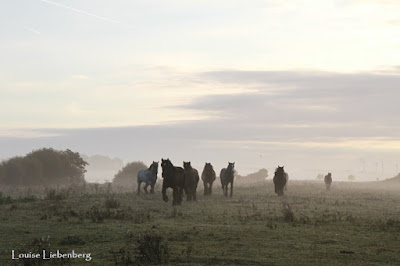 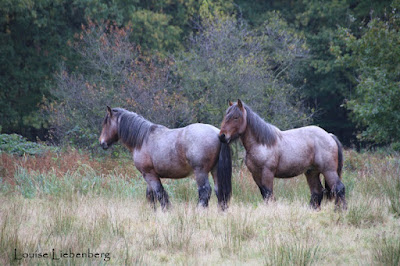 We visited a larger breeder with over 15 mares, but as we would not commit directly to buying any without first seeing what was available, the owner sold them the following day.  We did not want to be pressured into any rash decisions.

From all the foals we had seen the decision was made to import the two bay colts, and a blue roan filly. We still needed to find two blue roan stud colts for the Kowalchuk family. Finding good blue roans was like looking for a needle in a haystack. We found a nice, somewhat taller type bay roan colt, that had different bloodlines to the horses we had already selected.  After sending photo’s up and down and many messages, it was decided that Tim would join the team. 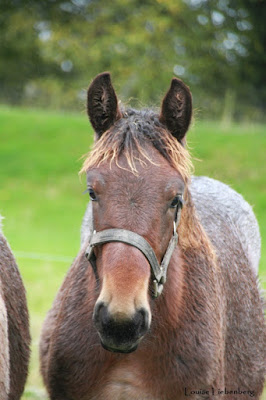 On our last day, we got a lead to two blue roan stud colts, that may, or may not be for sale. We went to see the first one, a lovely colt, but in our opinion still too young to be weaned from the mare and be transported half way across the world. 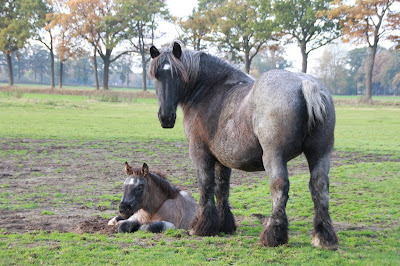 The last colt, was one from a breeder who had decided to keep him for the Stallion accreditation and show. We were welcome to come and see him but they were still not sure if they would be willing to part with him. We drove to the people, had a great visit and went to look at this colt. He was exactly what we were looking for, a good foundation type mother, excellent sire and he was lovely. He had the right color, the correct build and after some convincing was for sale for a fair and reasonable price. He was the final foal to join the others and we were super excited for him.

So, we had Jaco and Fanny for ourselves,

Tim and Crist for the Kowalchuk family

and Jacco, for the Campbell family in Saskatechewan. 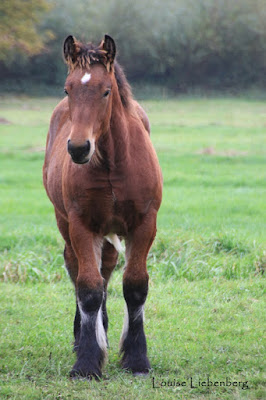 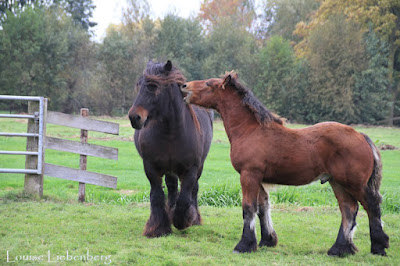 The import process could now begin.
Part 2 will follow.