We like to stay flexible with our management of our animals.
Staying flexible does not mean that we do not have any plan whatsoever,
it just means that when situations (such as predators, weather etc)
dictate otherwise,
we need to change our management strategy.

Due to loads of rain these last few weeks we decided to keep the ewes out of the bush where we have lots of wet spots.
We have been grazing all different spots around our ranch and beyond.

By using electric fencing we can easily fence off a piece to graze the sheep in.
The dogs understand and respect the electric net and stay where we put them. 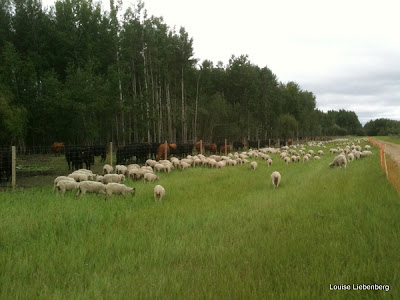 When the sheep are put next to the road, the first thing they do is follow the guardian dogs all the way to the back, then turn around and graze their way back. 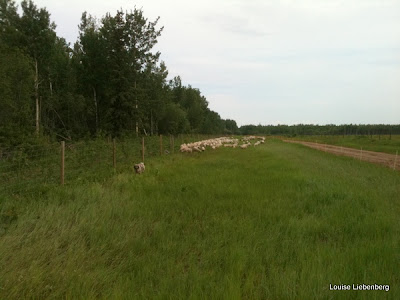 Fena is keen to join the ewes as she came a bit later.
She starts off in a hurry but soon walks quietly past the ewes, to race off again once she is past them.
She is very polite. 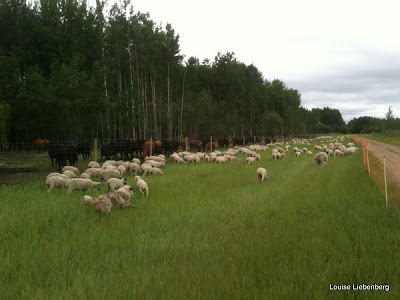 After a couple of days along the ditch,
they moved to another spot. 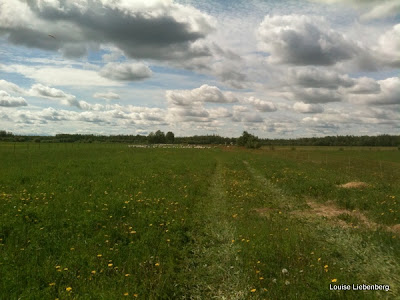 When we still lived in the Netherlands we used to do perscription grazing.
We used to shepherd our sheep everyday. 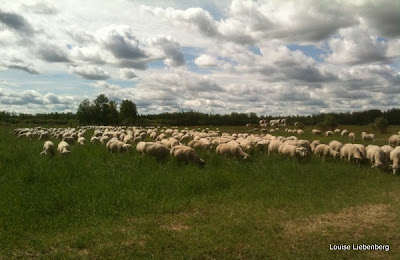 Shepherding sheep in certain areas is definately the way to go.
There are large tracts of land in Canada that traditionally have been grazed.
Community pastures were established,
so that ranchers could graze their cattle
during the summer months.
These pastures also have a profound impact on the flore and fauna of these areas.
A lot of wildlife  depends on a "grazed habitat" to be able to survive.
Unfortunately, the Canadian government has other plans for community pastures.

Please read this piece by Tevor Herriot about the future of Community Pastures:

You can also visit his blog at:
http://trevorherriot.blogspot.ca/


Federal Pastures to be Offloaded 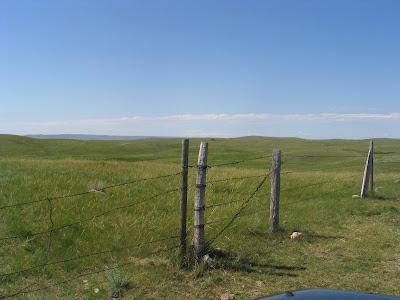 The Canadian government has announced it will no longer manage this kind of native grassland on the plains.Some of the best native grassland in North America has for more than half a century been maintained and protected by the Canadian Government through what we used to call the Prairie Farm Rehabilitation Administration or "PFRA".

These large pastures have been critical for cow-calf operators in Saskatchewan, giving them affordable access to grazing land in summer. The PFRA, however, always saw the maintenance of healthy grassland, protecting it from drought and overgrazing, as their number one priority. As this government web page says,


the program uses cattle grazing as the primary tool, supported by the latest range management science, to maintain a healthy, diverse landscape, which is representative of the natural functional prairie ecosystems.

That vision of grazing as a tool for ecological management of grassland stands in opposition to the commonly held view of grassland as a tool for growing grain or livestock. Because of this ecological stance from the PFRA model, the pastures are some of the last strongholds of Canada's many endangered grassland species at risk--from rare wildflowers and butterflies to the Swift Fox, Burrowing Owl, and many other birds.

Over the last decade the ministry of Saskatchewan Environment has designated sites of critical habitat for protecting the province's biodiversity and ecological wellbeing. They call it the Representative Areas Network or RAN. This government document on RAN shows that 64 of the PFRA pastures in Saskatchewan, totalling more than 650,000 hectares, are included in RAN.

Earlier this month, the Federal Government announced that they would be divesting themselves of all of the PFRA pastures, turning the land back to the provinces concerned. An article in the Winnipeg Free Press gave the following figures:


There are 60 federal pastures in Saskatchewan, covering about 1.78 million acres or 720,340 hectares. Most of that pasture would revert back to the control of the province, which says no decision has been made on what would happen to the land.

Apparently 1.6 million acres of that land will revert to the Saskatchewan Government. What will the Brad Wall Government in Saskatchewan do with the land? There is little chance they would keep the pastures and include them in the provincial community pasture program, but if they did that would not be good news either.

Anyone who has compared the ecological condition of a Saskatchewan Provincial Community Pasture with a Federal PFRA pasture knows that the province does not do as good a job balancing the needs of grazers with the carrying capacity of the grass and the imperative to maintain biodiversity. The condition of the rangeland and its capacity to support our beleaguered prairie plants and animals would decline rapidly under provincial management. There are good reasons for this and they are the same ones that explain why National Parks are maintained better than our provincial parks. The Federal Government has deeper pockets and has traditionally used those financial resources to protect Canada's natural heritage on Federally-managed lands.

Our Species at Risk Act (SARA) protecting Canada's endangered species depends on the Federal Government at the very least living up to its legislative committment to protect those species where they occur on land managed by Federal agencies. This fact has not escaped the notice of the Conservative Government now busily dismantling the commons and the legislative imperative for environmental responsibility at the federal level.

They know that if they can offload their responsibility for lands that hold the greatest numbers of endangered species, AND eviscerate the Environmental Impact legislation that is to protect our most vulnerable creatures from industry (see this Winnipeg Free Press article today on the changes being rammed through in an omnibus bill), they will be able to clear the way for oil and gas and other corporate interests to use the land as they see fit.

Giving up 1.78 million acres of the most endangered habitats in the country is a sneaky way for Stephen Harper to wash his hands of its equally endangered species.

Across the continent it has been demonstrated time and again that the best way to protect our declining grassland species is to maintain their critical habitat through public ownership. Private land-owners, no matter how well-intentioned, are pressed by market forces into management and land use modes that leave endangered species far down the priority list. And in cases where a private owner does manage the land well for a few years, that changes once the landowner dies or retires, selling the land to new interests which many not be as enlightened. Once critical habitat is privatized, the public interest of maintaining biodiversity has no leverage, no way to influence how the land will be used in perpetuity.

When are we going to wake up to the truth that laws protecting endangered species are useless without legislation to stop governments from giving up the management of the land critical to their survival?

It's time to declare endangered landscapes and begin working with governments, NGOs, industry, farmers and ranchers to find ways to protect those landscapes in perpetuity.

More on this topic next week. 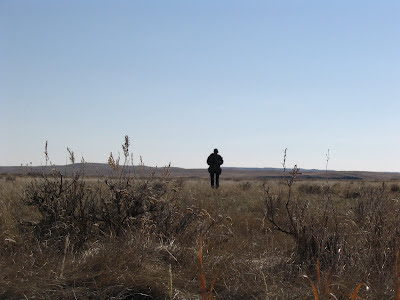